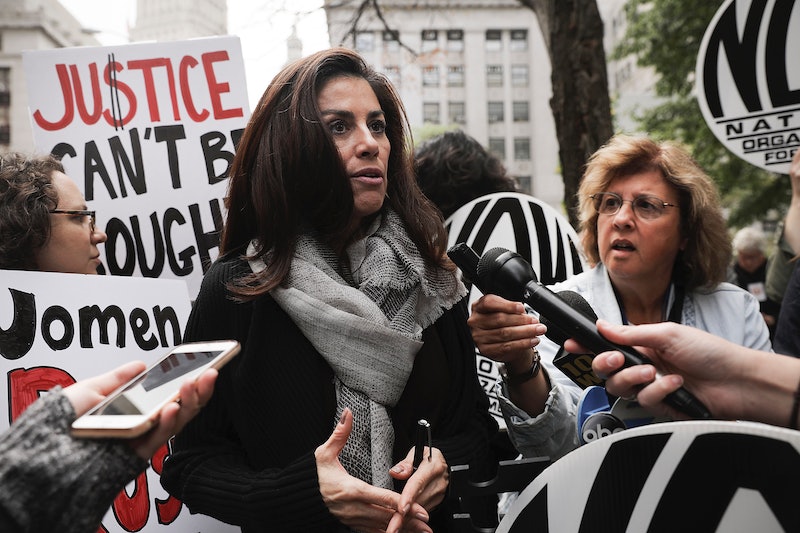 Since Trump took power, he has done everything he can to limit the rights of American women. And now he’s come up with another brazen move to regulate women’s bodies — he plans to cut funding from any organization that makes referrals for abortions, shares physical space with an abortion provider, or provides abortions directly. It’s vile, discriminatory censorship that puts politics between patients and their doctors.

This recent announcement, which has been flying quietly under the radar, will focus on how Trump's administration distributes Title X family planning funds. But it’s about more than just funding, it tramples on individual rights via executive rule and moves democracy and equality steps, if not decades, backward.

Trump spoke of "American carnage" at the outset of his presidency. Well here it is: appointing people to leadership roles in our federal health programs who reject scientific data and deny the effectiveness of birth control; putting religious protections above the public health and the safety of women; fighting to defund teen pregnancy prevention programs that have proven effective; and making it easier for companies to deny women health coverage for birth control.

Let’s see this for what it is: a callous attempt to put the squeeze on more than 4,100 clinics that provide birth control, cancer screenings, and STI testing. For many women, these clinics are their only health care. President Trump and ultra-conservative power brokers’ end game is to defund and regulate these women’s health clinics until they are shuttered. Already, many counties across the country have no clinics that offer family planning services, forcing women to travel great distances or go without.

It is precisely because of increased availability of comprehensive reproductive health care, birth control, and sex education that abortion rates have declined dramatically and teenage pregnancy is at an all time low.

But Trump, and his administration overrun with anti-choice extremists, are not interested in facts. Just last week, Trump appointed Diane Foley as Deputy Assistant Secretary of Population Affairs. Foley, who oversaw the operation of two fake clinics in Colorado, will now be responsible for administering Title X family planning funds to millions of low-income women across the U.S.

"This is only the latest work of a misogynist, authoritarian president and the fundamentalists he has appointed to create policies, deliver services, and run the government."

This is exactly what women have feared. Our fundamental right to reproductive freedom is at stake, and we must take a stand against it. This is not just a woman’s issue. Everyone should be alarmed when the government steps in to silence doctors and interfere with a person’s decision about their reproduction.

But this is only the latest work of a misogynist, authoritarian president and the fundamentalists he has appointed to create policies, deliver services, and run the government.

The head of the Department of Health and Human Services, Secretary Alex Azar, is in full support of HHS’s strategic plan to to further restrict abortion and elevate fetuses to personhood — which would inevitably lead to the policing of pregnant women. In his ranks, HHS Senior Policy Advisor Valerie Huber has spent a lifetime pushing abstinence-only education for teens, openly rejecting research that shows a clear link between access to contraception and lower rates of teen pregnancy. HHS’s Assistant Secretary of Public Affairs, Charmaine Yoest, opposes abortion even in cases of rape and believes that abortion causes breast cancer. (It doesn’t.) HHS’s Deputy General Counsel, Matt Bowman, represented the March for Life in its fight to overturn the health insurance mandate covering birth control pills and has worked with Katy Talento, the White House’s Domestic Policy Counsel to strip women of this vital benefit. By the way, Ms. Talento claims birth control is “breaking your uterus.”

"This is not just a woman’s issue. Everyone should be alarmed when the government steps in to silence doctors."

While these people push to end teen pregnancy prevention programing in our country, they are hoping to launch a detailed $227 million abstinence-only program (which was luckily just blocked by a Federal Judge).

Clearly, it’s going to take more than making calls to a White House that won’t listen to reason.

If you haven’t yet, give your time to local efforts to get people registered to vote; join a social justice organization, whether it’s NOW or the ACLU or the Center for Constitutional Rights, your dollars, activism and voice are needed.

Consider the Women’s Marches a test run. For many hundreds of thousands of people, it was the first time they’d taken to the streets. But our democracy and personal freedoms are under attack, and time is running out.

More like this
Watch Jacinda Arden’s Devastatingly Honest Resignation Speech
By Sam Ramsden
8 Charities To Donate To During Black History Month
By Alexis Morillo
Eurovision Has Been Given A Whole New Look Ahead Of Its Liverpool Debut
By Bustle UK
Man Meets Politics: ‘Boy Meets World’ Star Ben Savage Is Running For Congress
By Jake Viswanath
Get Even More From Bustle — Sign Up For The Newsletter
From hair trends to relationship advice, our daily newsletter has everything you need to sound like a person who’s on TikTok, even if you aren’t.