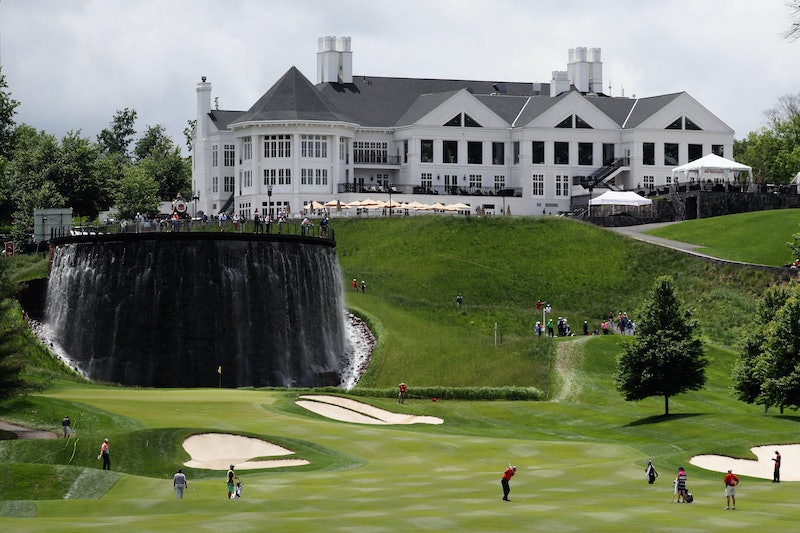 Bustle has reached out to the Trump Organization for comment. The Washington Post first reported the situation on Feb. 28, and officials confirmed Wednesday that they had given the golf course a citation for violating three local regulations, according to ABC. To the news network, Phillip Musegaas, vice president of programs and litigation for the Potomac Riverkeeper Network, explained why cutting down those trees can be so bad in that area.

The reason permits are required for such things, he told ABC, is because removing trees improperly can lead to an increase in debris in the Potomac River, which can then lead to pollution in the Chesapeake Bay, where the river flows into. To ABC, Musegaas said, "It's actually not good for their own property to clear cut trees like that."

To The Washington Post in February, Musegaas also said, "Clear-cutting large trees this close to the river will undoubtedly impact the river." He added that it's "bad for the river, and bad for people who use it." According to the outlet, a Maryland Natural Resources Police spokesperson said an official checked the area in March and noted there was no hazard right then.

This isn't the first time the Trump golf club has been called out for a similar act. In 2010, the Virginia golf club did the exact same thing, according to an article by The Washington Post at the time. Hundreds of trees were found to have been removed by the river — though this time, the Trump club argued that it was for an environmentally sound reason.

Ed Russo, an environmental expert representing the Trump Organization, told The Post in 2010 that the trees were threatening the shoreline, because they were eroding the soil by the waterline. Russo said, "When you have weak trees, they're subject to disease, and it spreads. When they fall over, they uproot the soil and create a very dangerous erosion problem."

There were no citations given out in this case, although Danny Davis, the chief of staff for county administration, did suggest the club had removed more than was necessary. He said to The Post, "I don't believe we felt that the extent of the removal was necessary. We recommended additional measures or different approaches, but we had no means whereby we could require them to do what we were suggesting."

The following year, Trump defended the 2010 tree removal in a telephone call, according to The Post at the time. To the publication, the president said that what had happened was perfectly legal, and that his golf club had spent "tens of thousands of dollars" keeping the area clean, trash-free, and debris-free along the shoreline since the course was purchased in 2009.

It was done so that people utilizing the services of the club - of which there are 1,000 members, it’s a very successful club - could have unobstructed views of the river, and because it was an environmental enhancement. The trees that were taken down were in terrible condition.

POTUS has yet to acknowledge this most recent removal at his Virginia golf club.