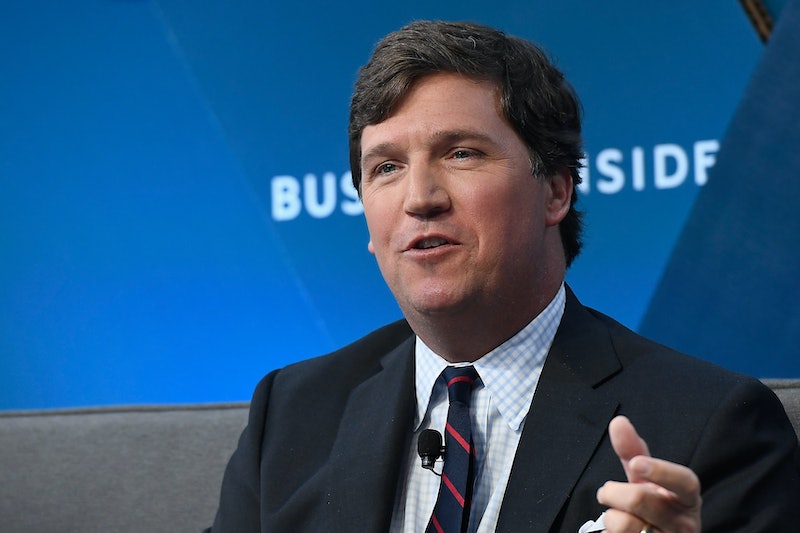 Last Thursday, a Fox News host made some pretty controversial remarks about the immigration crisis, suggesting it makes America "poor and dirtier and more divided." Now, following his comments, some of Tucker Carlson's advertisers are dropping their ads from his show.

The Washington Post noted that Carlson made these comments while discussing the migrant caravan coming to the United States from Central America on his show last Thursday. The paper indicated that Carlson asserted:

It’s indefensible, so nobody even tries to defend it. Instead, our leaders demand that you shut up and accept it. We have a moral obligation to admit the world’s poor, they tell us, even if it makes our own country poor and dirtier and more divided ...

One of our ads appeared on Tucker Carlson’s show last night following a segment where Mr. Carlson made a number of statements regarding immigration. As a company, we strongly disagree with Mr. Carlson’s statements ... We will not be advertising on Mr. Carlson's show in the coming weeks as we reevaluate our relationship with his program.

As The Hollywood Reporter (THR) noted, Bowflex, which is owned by Nautilus, released a statement on Monday announcing its ad withdrawal. THR reported that the statement reads as follows:

We can confirm that Nautilus, Inc., parent company for Bowflex, has pulled its ads from the Tucker Carlson Tonight show ... We have requested that Fox News remove our ads from airing in conjunction with Tucker Carlson Tonight in the future. Aside from our decision to remove our ads from his show, we have no other association or affiliation with Mr. Carlson.

THR also reported that, while not directly mentioning Carlson's show, Fox News suggested companies should be able to exercise "free speech" and not cave to social media criticism. "It is a shame that left-wing advocacy groups, under the guise of being supposed ‘media watchdogs,’ weaponize social media against companies in an effort to stifle free speech," Fox News said in a statement on Friday via THR. "We continue to stand by and work with our advertisers through these unfortunate and unnecessary distractions."

On his show on Friday — the day after he made his controversial immigration remarks — the Washington Post reported that Carlson again discussed the topic, but this time to express praise for immigrants. "The reason we keep going back to this topic, and let me just stipulate, as I have before with you, that I — I like immigration. I like immigrants," the host noted. "I give every person in the caravan the benefit of the doubt. I think most really do want to come here for a better life.”

It's not yet clear whether additional companies will pull their ads from Carlson's show. Fox News executives will likely be closely watching to see how Tucker Carlson Tonight is affected by this advertiser withdrawal.