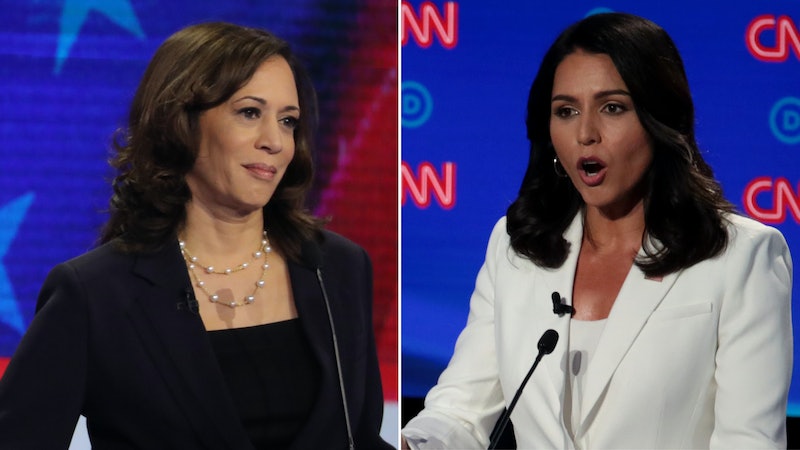 During night two of the second round of Democratic debates on Wednesday, Rep. Tulsi Gabbard attacked Sen. Kamala Harris' record on criminal justice with a number of weighty claims. Gabbard's attack was something of a microcosm of an ongoing debate about Harris' record as a prosecutor and as attorney general of California, where she opposed marijuana legalization and supported increasing cash bail amounts, among other policies. Harris has come under fire for describing herself as a "progressive prosecutor" when those past policies don't fit the common understanding of that label.

The hashtag #KamalaHarrisDestroyed was trending on Twitter on Thursday morning, thanks in part to support from Gabbard's supporters, according to The Hill. Harris campaign spokesperson Ian Sims suggested that hashtag trended in part due to Russian bots. Regardless, the clip of Gabbard saying she was deeply concerned about Harris' record as a prosecutor went viral.

"There are too many examples to cite, but she put over 1,500 people in jail for marijuana violations and then laughed about it when she was asked if she ever smoked marijuana," Gabbard said during the debate to a round of applause. "She blocked evidence — she blocked evidence that would have freed an innocent man from death row until the courts forced her to do so. She kept people in prison beyond their sentences to use them as cheap labor for the state of California."

Gabbard went on to claim that Harris fought to keep a cash bail system in place "that impacts poor people in the worst kind of way." Harris didn't try to directly address each of these claims in response to the congresswoman, but said she was proud of the work she did.

"As the elected attorney general of California, I did the work of significantly reforming the criminal justice system of a state of 40 million people, which be came a national model for the work that needs to be done," she said.

Here's how Gabbard's criticisms check out, and where they fit in the complex evolution of Harris' criminal justice background.

Rolling Stone pointed out that Gabbard was likely referring to a 2019 Washington Free Beacon investigation, which found that from 2011 to 2016, during Harris' time as California attorney general, 1,560 people were sent to state prisons for marijuana-related offenses. The number of low-level offenders went down after 2011, but likely as a result of efforts to stop prison overcrowding rather than any effort of Harris' to reduce convictions, Rolling Stone reported.

In 2014, Harris laughed in response to a question from a journalist about her Republican opponent's support for marijuana legalization, according to Forbes. But in her 2019 memoir, The Truths We Hold, she criticized marijuana laws for the disparity in enforcement between black and white people, who use the drug at the same rate, according to Vox.

Harris did laugh during a February interview on The Breakfast Club when she was asked whether she'd ever smoked marijuana before, but the moment of levity didn't come in the context of a discussion about her record as attorney general, or her previous stance on marijuana laws and convictions.

Claim #2: Harris Blocked Evidence That Would Have Freed A Man On Death Row

Gabbard was referring to the case of Kevin Cooper, who was almost executed in 2004 after being convicted of murdering a couple and two children in 1983. Cooper has maintained that he's innocent, according to The Sacramento Bee.

During her time as attorney general, Harris opposed DNA testing that could free Cooper. After The New York Times wrote about the case in 2018 and argued that Cooper had likely been framed, Harris told columnist Nicholas Kristof that “I feel awful about this," and tweeted her support for DNA testing for Cooper's case. She didn't explain her previous opposition to that DNA testing.

California Gov. Gavin Newsom has since ordered additional DNA testing in the case, but it has yet to prove Cooper's innocence, according to The New York Times.

The Sacramento Bee noted that Gabbard's "claim that the testing 'would' have exonerated him remains an open question." Harris also maintains that she's been opposed to the death penalty for her entire career, although, as Mother Jones has laid out, her track record on the subject is a bit more complex than that.

Claim #3: Harris Kept People In Prison To Use Them As Cheap Labor

In 2014, federal judges ordered California to allow non-violent, second-time offenders who have served half of their sentence to be eligible for parole as part of an effort to reduce the overcrowded prison population, according to reporting from The Daily Beast. Lawyers working for Kamala Harris' office at the time argued that releasing some of those prisoners would take away the state's source of cheap labor to fight wildfires, pick up trash, and clean city parks. The inmates were being paid about $2 per day to help fight the fires, The Daily Beast reported.

The judges rejected that argument, so the inmates were not actually kept in prison to be a labor source. Two months later Harris told BuzzFeed News that she was "shocked" and wasn't aware that argument had been made at all. In February, after she had launched her presidential bid, spokesman Ian Sams reiterated to The Daily Beast that the senator was "shocked and troubled" by what had happened.

"She looked into it and directed the department’s attorneys not to make that argument again," he told the news outlet. "Her office, on behalf of the state corrections’ department, then came to the table with the plaintiffs’ representatives to negotiate an agreement, which the court subsequently approved, that led to an expansion of the 2-for-1 credits."

But in 2017, as a U.S. senator, Harris and her Republican colleague Rand Paul introduced legislation to overhaul the nation's bail system. "In our country, whether you stay in jail or not is wholly determined by whether you’re wealthy or not — and that’s wrong," she wrote in a news release at the time, according to NBC News. "We must come together to reform a bail system that is discriminatory, wasteful and fails to keep our communities safe."

So Gabbard was mostly right that Harris' office blocked DNA testing in the death row case, but pretty off base in saying that Harris kept inmates in prison beyond their sentences to use their labor. And it's true that Harris has evolved significantly on the issues of cash bail and marijuana legalization since her days as a prosecutor. Whether voters will view that evolution as Harris turning over a new leaf with regard to criminal justice is less clear.