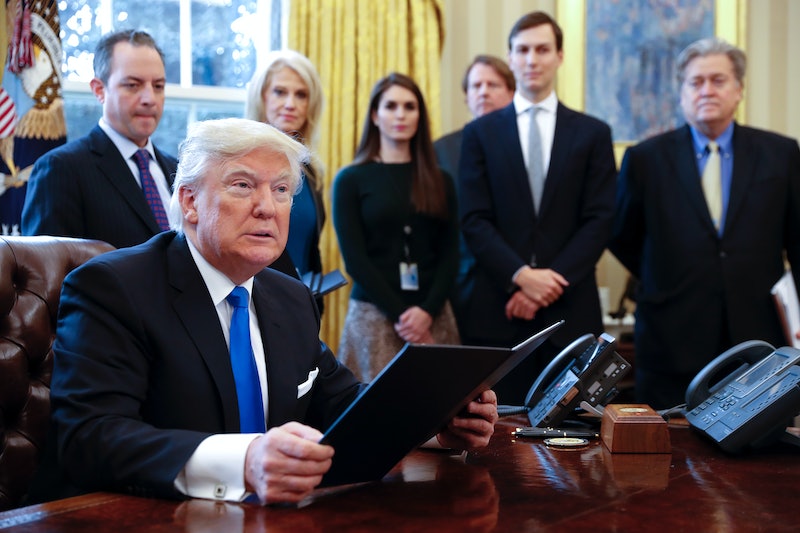 Earlier this week, the nation's collective jaw dropped when White House Communications Director Hope Hicks joined the ranks of high-profile staffers who've made (or are making) their exit from the Trump administration. Since taking office President Trump has struggled with a high turnover rate that has, at times, made the White House feel more like a huge revolving door. In fact, the turnover in Trump's White House is seriously striking when you compare it to former President Obama's.

If you're thinking turnover within the Trump administrations seems unusually high, you're not alone. Kathryn Dunn Tenpas, a nonresident senior fellow at the Brookings Institution, has been tracking turnover rates at the White House for decades. In a paper published earlier this year, Tenpas said Trump's first year in office had a staff turnover rate higher than the last five presidential administrations. In fact, Tenpas' research found Trump's turnover to be "record-setting."

According to Tenpas' data, 34 percent of high-level White House staffers left — whether they resigned, got fired, shifted positions, or exited some other way — during Trump's first year in office. Moreover, Tenpas found turnover in six of the 12 positions she deemed to be "Tier One," or the uppermost tier of decision makers in the White House. By comparison, the Obama administration saw turnover in just one of its 12 "Tier One" positions. Tenpas found Trump's turnover rate was "more than triple that of Obama" overall. The breakdown of how turnover in a few top-level White House positions compares between the Trump administration and the early years of the Obama administration really drives that home.

Katie Walsh, Trump's first deputy chief of staff, also was one of the first White House staffers to jump ship. She resigned on March 30, 2017, after just 70 days on the job. Her replacement was Kirstjen Nielsen, who officially took over the position on Sept. 6, 2017 and left just 92 days later. The position remains vacant. It's also been reported that Rick Dearborn, Trump's deputy chief of staff for policy, plans to resign sometime in “early 2018,” which would make his tenure a few months longer than a year.

It's worth noting that Obama also went through a few communications directors in the early years of his presidency. His first, Ellen Moran, left after just 92 days. Anita Dunn then served as acting communications director from April 21-Nov. 30, 2009, when Dan Pfeiffer officially took over. Pfeiffer then remained in that position for more than three years.

Given the Trump administration's tumultuous first few months — not to mention Sean Spicer's tense relationship with the press — it wasn't altogether surprising that Trump's first press secretary lasted less than a year in that role. Appointed on day one of Trump's presidency, Spicer ended up resigning 183 days later, on July 21. By contrast, Robert Gibbs served as Obama's first White House press secretary for a little more than 2 years.

Counselor To The President

In her paper, Tenpas argues there's likely more than one factor at play behind the Trump White House's high turnover rate. "I argue he has valued loyalty over qualifications and suffered from a White House that has functioned in a chaotic manner," Tenpas writes. "Both features have made it difficult to retain staff and have contributed to the governance difficulties he has encountered."

This is by no means a complete list of every Trump staffer to have exited the administration since Trump took office. It doesn't include some staffers who resigned, like Rob Porter, Omarosa Manigault Newman, Sebastian Gorka, or deputy national security advisers K.T. McFarland and Dina Powell. And it doesn't include any staffers who, burnt out by their first tumultuous year on the job, might be eyeing the exits as we speak. Judging by Tenpas' research, there's no reason to think Trump's high turnover rate won't continue into his second year in office.

More like this
Police Shove 'Full House' Star Jodie Sweetin At An Abortion Rights Protest
By Radhika Menon
How 5 People Upended Their Lives To Fight For Abortion Rights
By Hannah Smothers
Boris Johnson’s Leadership Is In Question – Again
By Bustle UK
The UK Abortion Laws In 2022, Explained
By Sophie McEvoy
Get Even More From Bustle — Sign Up For The Newsletter