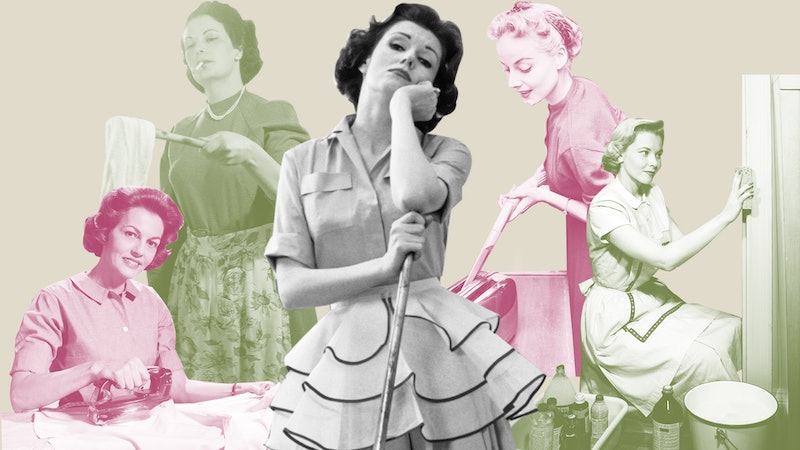 Five days a week for 22 years, Marcella* has been taking the 6 train from her apartment in Crown Heights, Brooklyn into the Upper East Side of Manhattan, where she works as a full-time housekeeper. She's witnessed a lot over the course of her tenure: the graduation of two children, the election of five United States presidents, a nasty fight with the co-op board. One thing she never saw? Her employer clean her own apartment. Until, that is, the pandemic hit. "She called and asked where I keep the vacuum cleaner, how to turn the washing machine on," Marcella tells Bustle. "The lady doesn't have a clue."

As New Yorkers continue to shelter at home, the upper crust are quarantined away in million-dollar apartments and Bridgehampton houses, with closets full of cleaning products they have no idea how to use. According to a May 2019 report published by the Bureau Of Labor Statistics (BLS), there are 100,490 maids and housekeeping cleaners working in "buildings and dwellings" in the United Sates, 47,990 of whom are employed in New York. That number includes hotel workers and does not include those paid off the books, but basically, many people pay someone else to clean up their mess. And for those sheltering in place without their help, the day of reckoning has come.

"I did not go into finance to deal with this sh*t."

"I got an email from a client asking what lightbulb is used in the chandelier in her family room — I guess she's spending more time there," Sue,** an interior designer who has catered to wealthy Upper East Side clientele for 30 years, tells Bustle. "I walked her through ordering from the manufacturer’s website, but couldn't actually teach her how to change it. I told her to go to her super."

Sue has also heard from clients who are panicking over how to clean their floors. Their questions range from what vacuum setting to use to what soap is best for mopping limestone. "They're noticing what needs to be done to take care of their own households," she says.

Those who won't dial, Google. Alejandra Costello and Nikki Boyd, organizational coaches and YouTubers who specialize in cleaning tutorials, say traffic has spiked since stay-at-home orders were issued across the world. Costello's is 123% over what it was this time last year, and Boyd's has tripled. "How To Mop" and "How To Turn On Vacuum" have both spiked in Google searches since February, per Google Trends. According to Laura Schocker, editor-in-chief of Apartment Therapy, page views on the site's cleaning vertical have nearly doubled. "We have seen that content explode over the past couple of months," she tells Bustle.

And when the internet won't suffice, you can always turn to your mom. That's the position Emily,* a 25-year-old wealth management advisor, has found herself in. After moving into a studio apartment in Soho last fall, she promptly hired a bi-weekly maid service. "I didn't tell my friends," she tells Bustle. "I worried they'd judge me."

But now that Emily's daily routine has been confined to four walls, she's coming to the realization that she never learned how to properly clean her space. So, she's been pestering her mother with every little question. "I did not go into finance to deal with this sh*t," she says.

"Would I love her to come and live with us? I’d love it."

On March 10, Michelle**, an Upper East Side resident who has been quarantined with her husband for 58 days, gave her housekeeper of 30 years the option of social distancing with the couple. Her housekeeper preferred to isolate along with her own daughter, and declined Michelle's offer. "I live in quite a large apartment, and maintaining a big household is a lot of work," she tells Bustle. "Would I love her to come and live with us? I’d love it. I’ve always appreciated her, but I appreciate her even more now."

Michelle's Park Avenue apartment is so sizable, she's found her vacuum cleaner can't extend far enough to properly clean each crevice. To avoid scraping the wall moldings, she had to attach sheepskin to either side of the vacuum. She's also come to learn that her husband goes through a bar of soap a week. Instead of calling her housekeeper for help, she's found herself Googling "soap scum marble?" in confinement.

"My husband is the one that’s clueless," she says. "He's usually at work, and doesn't know how to use the vacuum, or where the sponges are kept, or where we store extra detergent or a rag. He ruined my stuff by washing the darks and the whites together, but loves doing laundry."

Therein lies the risk. What if the rich were to become overnight Lysol enthusiasts — Marie Konheads, drunk off of the joy of tidying up — and render an entire industry of service workers obsolete? Such concerns are top of mind for Grace,* a Polish immigrant, who has cleaned for the same four families since the '90s and relies entirely on word-of-mouth for employment. She tells Bustle that between her 30 days out of work and her bosses texting her cleaning questions, she's worried that, come quarantine's end, she could be out of a job.

"I'm afraid that if [they] like cleaning, I may lose my work," she says.

Sue doesn't believe her clients' sudden interest in scrubbing comes from a newfound interest, but rather, stale observation. Self-isolation has provided the city's wealthiest occupants with a rare opportunity: a chance to sit still and take stock of all that they own. And they're learning that, under usual circumstances, they don't actually inhabit or enjoy the lives they've built for themselves.

"I design for people, but New Yorkers don’t spend a lot of time at home," she says. "Now that they’re [stuck] in their apartments, they realize they haven't been living fully."

*Last name has been omitted at her request.

**Name has been changed at her request.

More like this
Here’s What TikTok's "Mascara” Trend Is *Really* About
By El Hunt
What The UK Blocking Scotland’s Gender Recognition Bill Means
By Sam Ramsden
Ben & Jerry’s New Sundae Flavours Are A Chocoholic’s Dream
By Sophie McEvoy
I Spent 2 Years Trying TikTok’s Dating Advice
By Kailynn Johnson
Get Even More From Bustle — Sign Up For The Newsletter
From hair trends to relationship advice, our daily newsletter has everything you need to sound like a person who’s on TikTok, even if you aren’t.