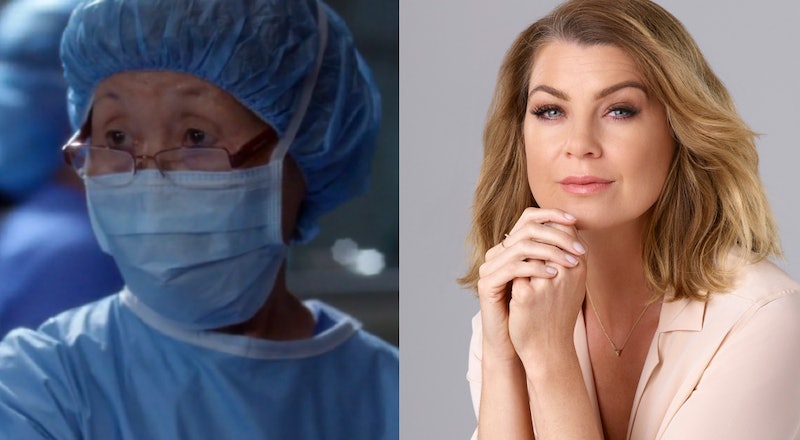 Few characters have been on Grey's Anatomy as long as Meredith Grey, but one person who has been there all along in the background is Bokhee. The OR nurse who has been on the show since Season 1 has been featured in many of the surgeries at Grey Sloan Memorial, although she rarely speaks. But, every once in a while, she does — and fans live for it. On Thursday's episode, Bokhee spoke to Meredith on Grey's Anatomy, and she said the perfect thing.

During the episode, Meredith set the hospital record for longest surgery. It was over 27 hours long, making it three hours longer than the current record. So, what did Bokhee say to Meredith during this stunning surgery? She called her "Wonder Woman." Melt my heart why don't you. Bokhee (whose real name is also Bokhee) is a bit of a Wonder Woman herself on Grey's Anatomy, because she's been in every season and is a real life surgical nurse. Sandra Oh, who played Cristina Yang, even called her "my 2nd mom" on Twitter. Only the highest praise for Bokhee.

Some fans thought Bokhee calling Meredith Wonder Woman was the first time the nurse had spoken on the show, but that's actually not true. She doesn't speak up often — usually relying on eye rolls and stares to communicate her thoughts — but she has made her voice heard on occasion. In Season 10, Episode 12, Bokhee spoke up when Shane and Leah seemed unclear about what to do in their surgery on Alex Karev's dad. "Doctor? Bypass," Bokhee said pretty forcefully, knowing that Shane was in over his head.

But this speaking line with Meredith was a bit more fun and a lot less high stakes than that one. Relive the awesome moment again here:

Some Were Shocked By What They Just Heard

It was such a quick line and she so rarely talks that it took some fans a minute to register that Bokhee. Was. Speaking. (And speaking the truth, no less.)

Others Were Just Flat Out Thrilled

Grey's Anatomy can get pretty sad. So when it's happy, even for a brief moment, fans go wild.

Even Those Behind The Scenes Were Excited For Bokhee

The official Shondaland Twitter account let fans know that, even at the table read, the cast was so excited about Bokhee's line.

People Totally Loved The Importance Of The Line

It doesn't get much better than this #girlpower moment between Meredith and Bokhee.

And Some Demanded A Bokhee Focused Episode, Already

Give the people what they want!

Bokhee may have already spoken before, but this was one of her most meaningful lines ever. She recognized Meredith's greatness and helped her get through a long surgery. And, hey, Bokhee deserves some credit too because she was in there just as long! And she's been in so many surgeries since all the way back in Season 1. The show may have lost many main cast members over the years, but Bokhee's been there all along — just waiting to seize her moment. We're just lucky to have witnessed it.