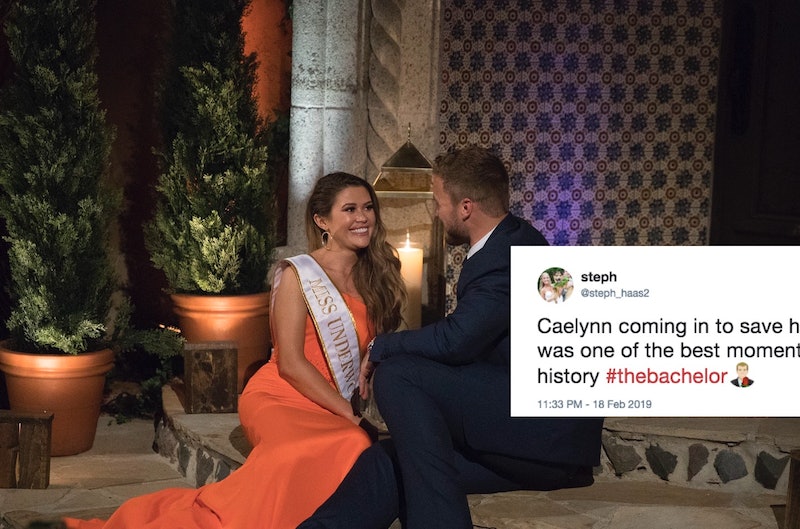 Sure, the premise of The Bachelor is for a man to fall in love with a woman (or women) in the cast. However, the strongest relationships on the show are usually between the contestants. Case in point, Caelynn really had Cassie's back on The Bachelor on Monday night. Caelynn wasn't even on the three-on-one date and she already had a rose, but she still went out of her way to show up and talk to Colton to defend her close friend. Yes, Caelynn did this even though they are technically "dating" the same guy and competing to end up with that same final rose. They must have a strong friendship, right?

The latest episode was chock-full of drama for pretty much everyone except Hannah G. During her one-on-one date, Tayshia told Colton that she questioned Cassie and Caelynn's readiness for marriage. Not only that, but she even claimed that they would say "no" to a proposal and that they already discussed being the next Bachelorette. Understandably, Colton was crushed and confused.

Where is the footage from these supposed conversations? Did this even happen? That's up for debate. However, the fans did get to see one major moment: Caelynn swooping in to take up for her friend Cassie. Whether you love Caelynn, question her intentions, or even if you lie somewhere in between, it's fair to say that she's a very loyal friend. So much so, that plenty of Bachelor viewers tweeted their reactions to the date interruption.

More like this
It’s Official: 'The Bachelorette' Is No Longer A Fairy Tale
By Samantha Allen
Former 'Bachelor' Producer Elan Gale Knows The Secret To Your Favorite Shows
By Samantha Rollins
Memes & Tweets About Logan Switching From Rachel To Gabby On 'The Bachelorette'
By Grace Wehniainen
'The Bachelorette's Tino Is Dividing Fans Over His Reaction To Rachel's Group Rose Choice
By Brad Witter
Get Even More From Bustle — Sign Up For The Newsletter