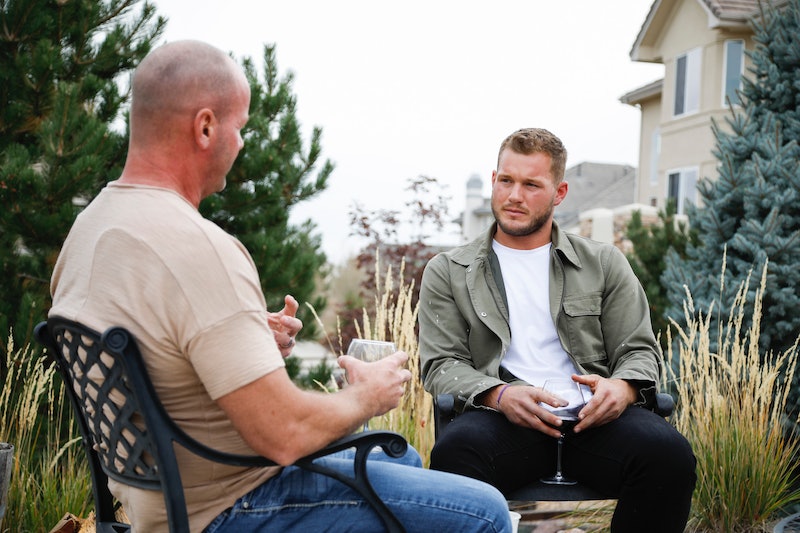 Colton's season of The Bachelor is about to hit hometowns, which means one thing — the stakes are even higher, the conversations are more important, and the women may be getting increasingly desperate to show the former NFL player and current virgin that they're "falling in love" or "ready to go on this journey" with him. There are only three weeks left before Colton could be getting engaged, and the ladies are pulling out the stops, but the last group date got really intense when . Caelynn and Colton had a side convo on The Bachelor that seemed to change the entire mood.

Caelynn and Colton were vibing since the very beginning, and they only grew closer after Caelynn told him about a sexual assault on a very intimate one-on-one date with Colton. After that, Caelynn and Colton have been as inseparable as two people can be on The Bachelor. So when she already had a rose and still interrupted another two-on-one date in order to tell Colton some deep, dark, rose ceremony secret, it was surprising. What does Caelynn have to gain (or lose) by just popping in for a quick moment to say hi to the man she's falling in love with?

Caelynn has been involved in some drama, and not even of her own making. The first was from Hannah B., who knew Caelynn in the pageant circuit and claimed that Caelynn was an awful mean girl who was only up to no good. That didn't end up well for Hannah B., because she got sent home. Later, Caelynn was accused by Tayshia of being on The Bachelor only as a means to be on The Bachelorette and that she wasn't ready for marriage. Despite all of these flareups, Colton has been by Caelynn's side all along, giving her a great chance of going home with him at then end. Caelynn is definitely a frontrunner.

So what did she say to him when she went upstairs mid-dinner, anyway? It could have been anything, since us lowly viewers weren't privy to the conversation. One train of thought is that Caelynn was seeking to punish Kirpa, who was helping spread rumors that Caelynn wasn't ready for marriage, and told Colton what Kirpa was supposedly up to. A few women had warned Colton about some of the girls on the show not being there for the proverbial right reasons, so perhaps this was Caelynn's way of encouraging Colton to go for what his heart wants and kiss all those naysayers goodbye. Seeing that he gave Cassie the group date rose and sent Kirpa home just after that convo — this is likely what happened.

Next week, Colton will meet Caelynn's family, and we'll see just how far these two can go. It seems like Caelynn's dad is going to give Colton a run for his money. Whatever Caelynn said to Colton, it was enough to guarantee her friend Cassie a spot in hometowns and cast away one of the other alleged bullies on the show. It's a moment of drama Bachelor fans were sad to miss, but don't worry — there are plenty more fences for Colton to jump. And hopefully the women will spill some of the tea on the Women Tell All special later this season.