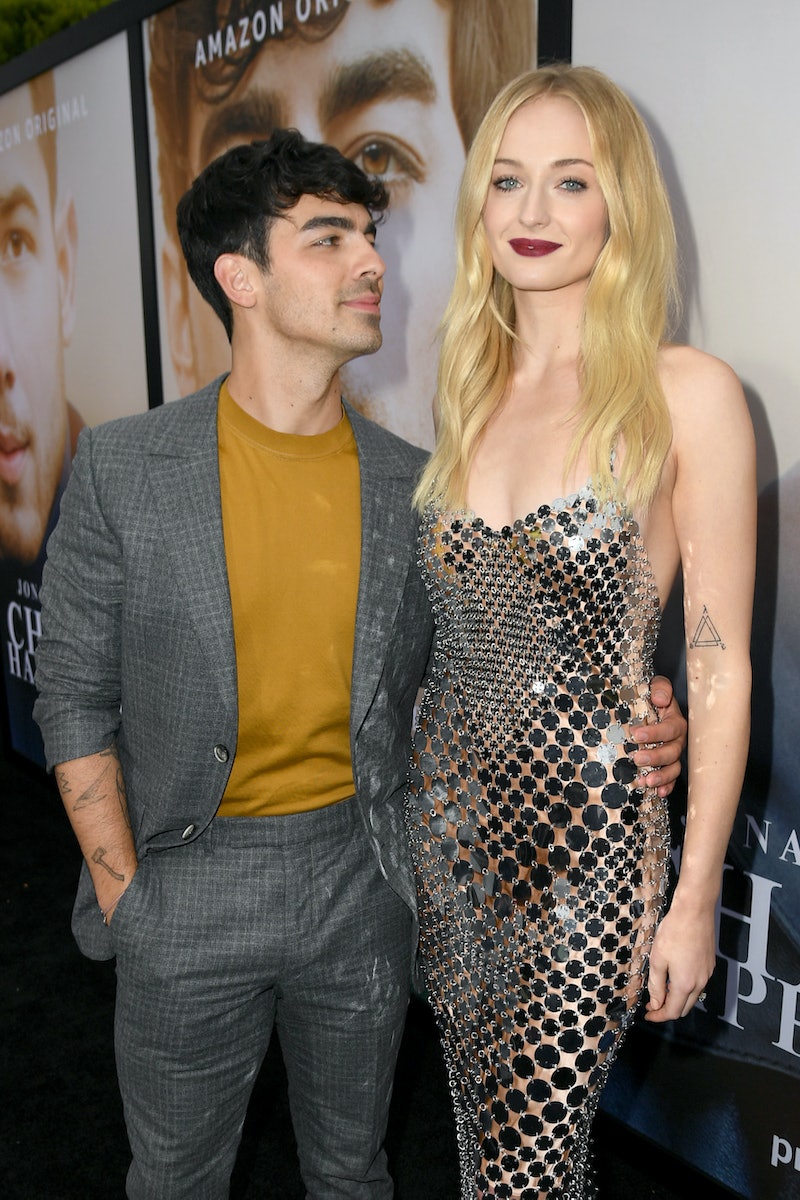 If you thought their surprise Las Vegas elopement after the 2019 Billboard Music Awards caused a stir on social media, these tweets about Joe Jonas and Sophie Turner's wedding in France show their second big day triggered a massive response from their fans. The couple spoke about having a summer ceremony after tying the knot the first time, and it came around just a little over a month later. According to E! News, the two held a second, more formal service on Saturday, June 29 in the south of France.

The ceremony location was private and beautifully decorated with flowers and glass candles, per E! News, and a reception was held at Château de Tourreau, which the couple appropriately renamed "Château de Jophie." Sophie wore a lace dress with a long veil, and the pair reportedly teared up during an emotional sharing of their vows, as reported by E!. Those few pieces of info are enough to confirm that it was definitely a magical night, but of course, fans want more. All over social media, they oohed and ahhed over the special occasion, and while they waited for the release of official photos and ceremony deets, they took to Twitter to discuss some of the day’s key takeaways. And naturally, most of the commentary was hilarious. Joe would approve.

The Anticipation Was Real

The ceremony was privately held in a secret location, which meant the wait for official photos could be long. Some fans had other plans, and spent the couple's entire wedding day scouring the web for deets.

Their Dog Was The Star Of The Show

Joe and Sophie's husky puppy, Porky, was an official groomsman. He wore a mini tuxedo and lined up with the others for photos, and the internet couldn't get enough of it.

Some longtime lovestruck fans can't stand the thought of Joe being a married man...

...and were willing to go to great lengths to keep the wedding from happening, even though Joe and Sophie have technically been married since their Vegas elopement.

Other Fans Were Happy For The Newlyweds

The Wedding Hashtag Was Perfect

Everyone knows wedding hashtags can become very corny very easily, but Joe and Sophie's last names were made for this moment. Whoever came up with #TurnerIntoaJonas deserves an award.

The T-Swift References Were Alive & Well

Even though they publicly made peace about their teenage breakup, fans will always bring up the past. It's unclear whether or not Swift was invited to the wedding after she apologized for throwing Joe under the bus on The Ellen DeGeneres Show and Joe later forgave her on ITV’s Lorraine.

Joe Became King In The North

Although Sophie's decade-long project Game of Thrones has officially come to an end, fans couldn't help but crown Joe the King in the North from afar.

The Dress Reveal Was An Event Of Its Own

It was the wedding and the dress reveal of the century, after all.

Clearly, fans can't get enough of Jonas and Turner's weddings... any chance they might hold a third ceremony? Asking for a friend.

More like this
'RHOP' Stars Robyn & Juan Reportedly Got Remarried & Filmed The Ceremony
By Brad Witter
'Bachelorette' Vet Clare Crawley Unveiled 2 Special Wedding Day Accessories
By Stephanie Topacio Long
Twitter Is In Awe Of Taylor Swift’s “Lavender Haze” Music Video
By Jake Viswanath
Twitter Can’t Get Over This One Part Of Lily Allen & David Harbour’s House
By El Hunt
Get Even More From Bustle — Sign Up For The Newsletter
From hair trends to relationship advice, our daily newsletter has everything you need to sound like a person who’s on TikTok, even if you aren’t.