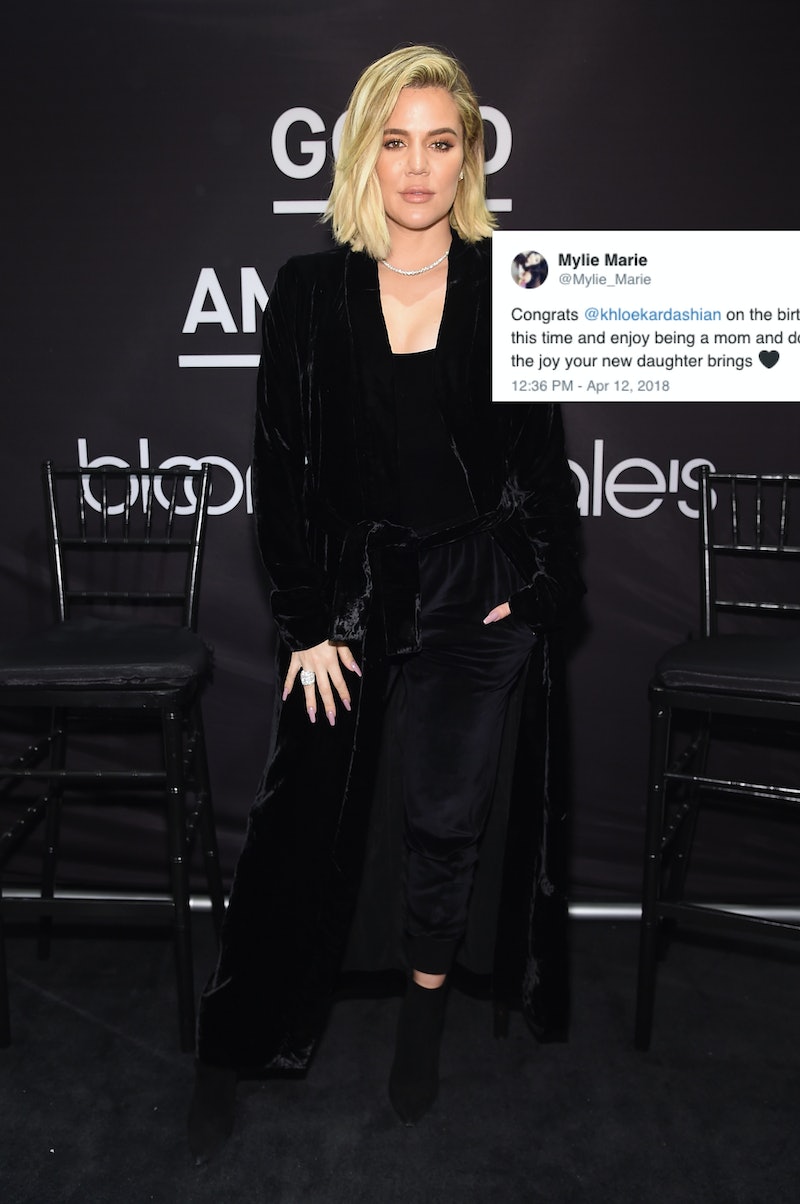 Khloé Kardashian has officially given birth to her first child, according to TMZ. On April 12, she welcomed a daughter whose name has not been revealed. Fans on Twitter are supporting Khloé and her baby already, tweeting her messages of support and encouragement during a rumored turbulent time for the TV host and designer. (Bustle reached out to Khloé's reps for comment on the baby news, but did not receive an immediate response.)

While most women in the Kardashian family had their children at Cedars-Sinai Medical Center in Los Angeles, Khloé reportedly gave birth at a hospital in Cleveland. Since getting together with NBA player Tristan Thompson in late 2016, she's made a home for herself in Ohio, as Thompson plays for the Cleveland Cavaliers.

Longtime fans of Khloé's know how meaningful this pregnancy is to her. When the TV star was first married to NBA player Lamar Odom, Khloé struggled to get pregnant. In one episode of Keeping Up With The Kardashians, she is thought to be pregnant, and was heartbroken to find out it was not the case. Khloé adores her nieces and nephews, and has long hoped to raise her own super-sized family. Though the nature of her relationship with Thompson is unknown currently, fans are sharing nothing but love and support for her with this joyous news.

1. This Fan Assured Khloé That Nothing Else Matters

"Your daughter is your happiness, your world!" one user wrote to Khloé, adding, "Anything that disturbs your happiness needs to go!" Definitely some polite encouragement.

Another fan congratulated Khloé on the birth of her daughter while also throwing some masterful shade at the other Kardashian headlines of the day. (As in, the rumors that Thompson allegedly cheated on Kardashian with multiple women. Bustle reached out to Thompson and Kardashian's reps about the rumors, but did not receive an immediate response.)

3. This Fan Is #TeamKoko For Life

This person welcomed Khloé to motherhood in the sweetest possible way. Hashtags and all.

"I don't know you," a user tweeted at Khloé, "But I just want to tell you that things will be okay." Isn't that all any of us wants to hear? They added that "as you hold your beautiful daughter in your arms," Khloé will be able to see what's valuable and what isn't. A Twitter blessing.

5. One Fan Wrote A Simple Congrats

One fan was so ready to wish Khloé congratulations, she didn't even have time to find an emoji. Understandable, TBH.

"Ignore the bull and the naysayers," intoned this Twitter sage. He suggested that God sent Khloé her baby and by extension, Thompson, which is pretty sweet.

A Texan Twitter user named Amy wished only Khloé well after the birth of her daughter. That could mean any number of things, or just be a joke. But either way, it's kinda great.

Another warm wish from someone who knows how important religion is to Khloé.

Aww! Sometimes, that's all you need to hear.

This particular piece of advice is concise, helpful, and encouraging. In other words, it's perfect.

This Khloé fan wrote that she hoped her fave was enjoying every moment and that people were respecting her privacy. Now, that's a good friend to have. Hopefully, the fact that Khloé chose to have her daughter in Cleveland will help ensure paparazzi stay far away.

13. A Four-Heart Emoji Type Of Moment

Is there a way to get all of Khloé's incredible fans together for a group hug?

This fan also few heart emojis to emphasize just how happy she was for Khloé and her baby girl.

This one is slightly misspelled, but since this fan is obviously #TeamKoko all the way, let's just assume it was because of her excitement.

16. This Fan Wished A Kind Congrats To Khloé & Tristan

Another Twitter fan was among the few to send congratulations to both Khloé and her boyfriend without any other comments.

"You'll get through this!" wrote this person, likely tied to all the Khloé-related headlines today, not all of which are positive, "And be an even stronger woman!"

18. One Fan Doesn't Even Have A Twitter Pic Up Yet But Still Had To Tweet To Khloé

This person had obviously been following Khloé's journey to motherhood, and this tweet pretty much defines "effusive."

It's great to see that Khloé's fans are so excited for her, and will rush to support her at every opportunity. That outpouring of love, affection, and warmth is probably exactly what she needs right now. The ocean of encouragement is legit the internet at its best.