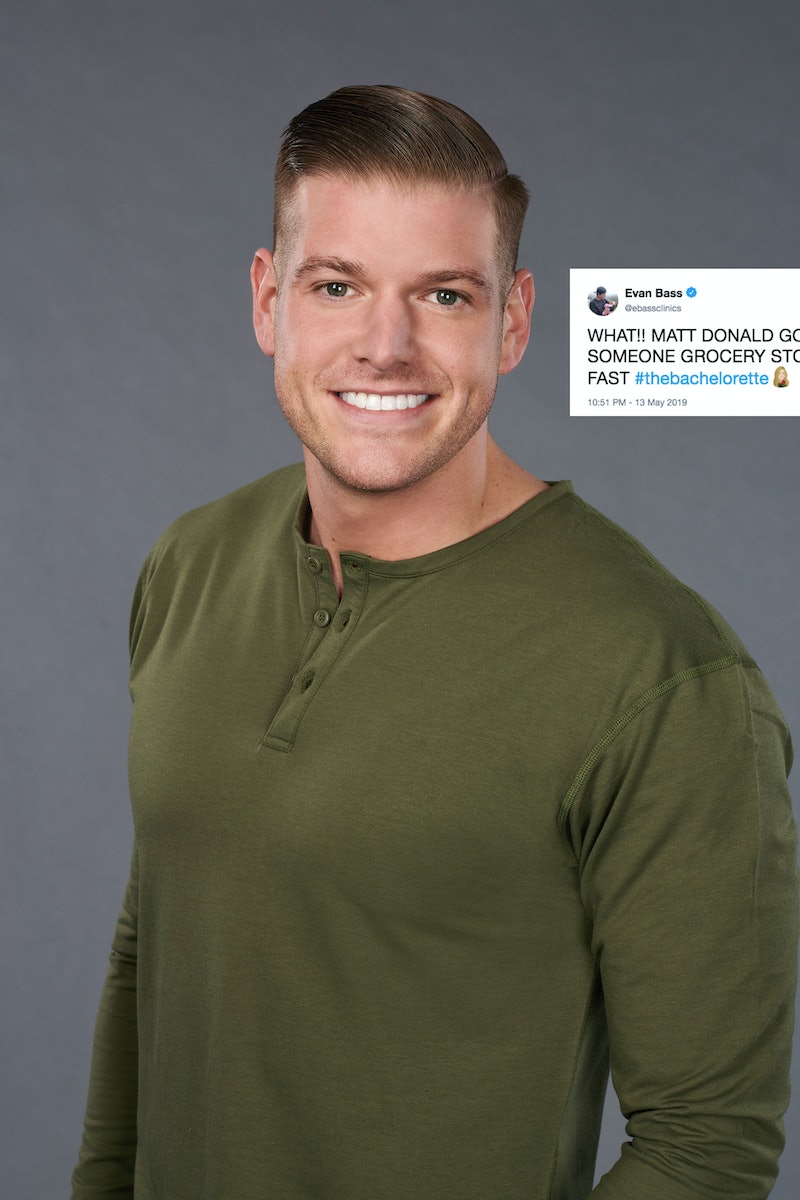 There were so many guys to keep track of during the season premiere of Hannah Brown's Bachelorette season. Even so, some stood out more than others. In fact, viewers think Matt Donald is the Grocery Store Joe of The Bachelorette this season. He seemed like a total catch.

He runs a farm full of goats. He has two deaf parents, a deaf brother, and understands sign language as a result. He showed up singing an original song and the lyrics were on point. There really were bros everywhere. He was the only one to rock a hat. Oh, and to top it off, he was all about that "Roll Tide" life. Perfect for our girl, Hannah. Right? Well, apparently not.

He didn't even get one rose. Instead, Hannah sent him packing at the end of the first night. Why, Hannah? Why? In all fairness, there really were too many men to meet in one night. However, he did stand out to the viewers.

Many Bachelorette fans couldn't help comparing Matt Donald to Joe Amabile aka Grocery Store Joe. They're both genuine guys who stood out from the crowd, yet they never got to move into the Bachelor mansion. Even Joe himself couldn't help but agree:

Let's just hope that Matt gets some justice, i.e. a Bachelor in Paradise redemption story just like Joe got. There would be plenty of fans on board.

He just has to be the next Grocery Store Joe. His time in Bachelor Nation would just be way too short.

Was This A Setup?

Is this an annual thing now? A one-night contestant wows the viewers only to build up a following for Bachelor in Paradise. Let's hope so. The fandom needs more Matt.

There were some comparisons between Box King Joe and Grocery Store Joe, since they're both named Joe and have those Chicago accents. However, Matt Donald really stole the show and captured viewers' hearts.

He Was Gone Too Soon

It was too much seeing Matt Donald give that exit interview outside of the mansion the morning following the rose ceremony. His time on The Bachelorette was just way too short, just like Grocery Store Joe's.

He Needs To Go The Grocery Store Joe Route

Is a consensus on Twitter enough to get Matt Donald on the Grocery Store Joe track? If it's not, it should be.

He Could Be The Next Grocery Store Joe

She is right. Well, hopefully.

He Got A Lot Of Screen Time

Who edited this episode? Matt Donald got a lot of screen time, earned some fans, and he still did not nab a rose. That had to be on purpose, right? Let's keep our fingers crossed for a Grocery Store Joe 2.0.

He Needs To Go On Bachelor In Paradise

He needs to be on BiP this summer in the original cast.

That Was An Injustice

Justice can only be served on a beach in Mexico.

He Should Bring A Goat To Paradise

A goat would be an interesting plus-one.

The good news is that Matt Donald reminded everyone of Grocery Store Joe. The bad news is that means he got cut on the first night. Hopefully, he's able to turn things around with a stint on Bachelor in Paradise.