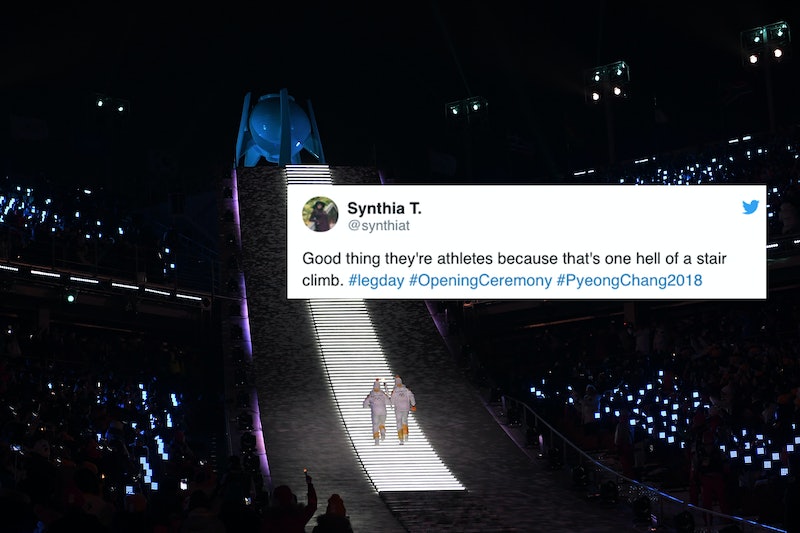 During the opening ceremony for the 2018 Olympics in PyeongChang, South Korea, two hockey players had to climb an epic staircase leading to the cauldron. They basically did the hardest leg day at the gym that you can imagine, and people on Twitter are seriously impressed about the torchbearers' climb to the Olympic cauldron.

The two athletes are on the Koreas' unified women's hockey team, the countries' first-ever joint Olympic team. South Korean player Park Jong-ah joined North Korean player Chung Su-hyon to carry the torch up the gigantic staircase at the opening ceremony. They then passed it off to South Korean figure skating star Yuna Kim, aka "Queen Yuna," who lit the Olympic cauldron.

This moment was memorable for many reasons. For one, it sent a message of peace. The 2018 Games marked the first time in more than a decade that the Koreas walked under a unified flag. Nearly 30 years ago, when the Olympics were last hosted in South Korea, North Korea refused to attend the games.

By carrying the torch together, Park and Chung made history. They also made history, according to Twitter, by running up one of the largest staircases anyone has ever seen.

Here are some of the best reactions from fans on Twitter.

"Good thing they're athletes because that's one hell of a stair climb," someone tweeted, along with the hashtag #legday.

At Least There Are Stairs

Before the large staircase was revealed, some people thought the athletes would have to scale a vertical slope, which also would've been very impressive.

A lot of people commented on how scared they would be if they were forced to climb those stairs.

While a lot of people were impressed by the sheer physicality of the climb, many people recognized that it was an important moment for the Koreas to carry the torch together.

Watching the hockey players make the climb to the cauldron was an emotional moment for a lot of people. "Can't wait to watch and sob again later," someone tweeted.

Why Couldn't They Light The Cauldron?

Some people felt Park and Chung were cheated, because they had to make the climb up the "death steps," while Kim got the honor of lighting the Olympic cauldron.

No one was really surprised that Kim was the one chosen to light the cauldron, but a lot of Twitter users felt like the hockey players were overshadowed by "Queen Yuna," and that they'd climbed all those stairs for nothing.

Can They Get A Timeout?

Someone said they would've "called a timeout" halfway up the steps if they were forced to make the climb.

While the staircase definitely added to the drama of the opening ceremony, some viewers wondered why it was necessary in the first place. Won't the athletes already be doing enough physical activity at the games?

Everyone had to admit they probably wouldn't be able to handle those stairs.

Where Are Their Medals?

The hockey players deserve at least a bronze for that stair climb.

And They Did It In Unison!

Park and Chung's strength and coordination is truly impressive.

A lot of viewers commented that just watching the hockey players climb the stairs was making their legs hurt.

Most people were simply in awe watching the two women run up those steps.

Someone said that even if they'd been asked to light the Olympic cauldron, climbing all of those stairs still might not be worth it.

And these are just the reactions on Twitter from the opening ceremony. There's plenty more record-breaking moments to talk about when it comes to the 2018 Olympic Games, which are the largest Winter Games in history.

More like this
6 Organizations Fighting Police Brutality That You Can Support Right Now
By Syeda Khaula Saad and JR Thorpe
Watch Jacinda Arden’s Devastatingly Honest Resignation Speech
By Sam Ramsden
The Internet Can’t Get Enough Of Viktor & Rolf's Upside Down Dresses
By El Hunt
'Brookside' Is Coming Back & Soap Opera Fans Are Going Wild
By Sam Ramsden
Get Even More From Bustle — Sign Up For The Newsletter
From hair trends to relationship advice, our daily newsletter has everything you need to sound like a person who’s on TikTok, even if you aren’t.