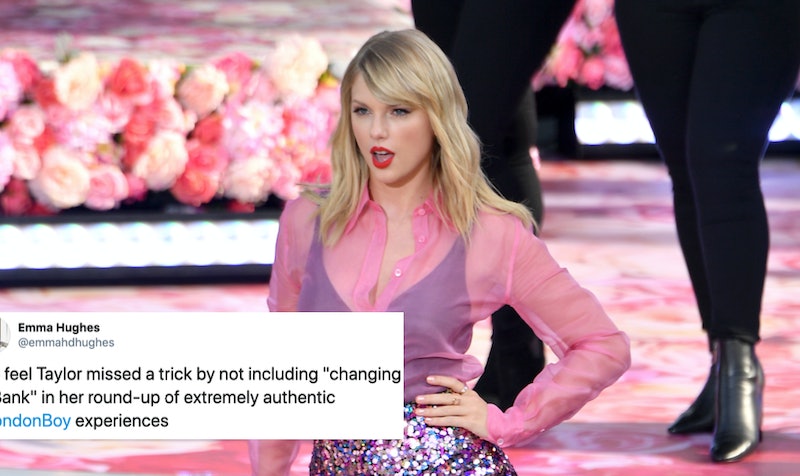 Taylor Swift releasing any new music is incredibly important. Right, stop the clocks, down your tools, get that stuff on. Now needless to say the fact that she wrote a song about the UK's capital London is like just about some of the most exciting news surrounding the album. Especially for anyone even remotely familiar with the place, as she name checks heaps of oh so familiar hot spots around old London town. Needless to say, people on social media have a lot to say about this and the funny tweets & memes about London Boy are too much.

Yes guys, it turns out that a lot of people out there reckon themselves to be comedians. And TBH, they might not be wrong. Actually, this right here might be the springboard into a hugely successful career as a world class comic.

Swift's new song, the first track off her brand new album Lover, has had the classic Swift related response. Which is basically, "OMG which one of her exes is this about?!" Luckily others like myself who found this constant rhetoric relating to the musician a bit tedious, are instead are doing the right thing. And taking the p- out of the city we all love to hate and hate to love, London.

A few pretty shrewd re-writes are swirling around the internet as we speak.

For anybody who is familiar with the geography of London, the destinations and routes discussed in the song are a bit on the anxiety causing scale.

I mean seriously she must be putting an awful lot of money away on Ubers.

Like honestly look at the facts. And any normal Londoner would do what we all do and accept that anybody living more than 30 minutes from your gaff might as well be dead to you.

Referencing Highgate was always going to be a good option. Not only because it rhymes with mate but also, well Highgate is known for some particularly famous residents. Erm, underground residents at the very famous Highgate Cemetery.

Or for one other bacon sandwich munching legend.

Some people pointed out that she left out some key neighbourhoods.

And some were just a bit confused by the whole situation entirely.

Especially when they hear famous neighbourhoods that they're familiar with. Like, very good question. When did Taylor Swift go to Brixton?

Some pretty aware fans clocked similarities between the song and a classic anthem.

And even went on and did their own remix. Because I mean I don't mean to generalise but dating a London boy might not always be as nice as the lyrics in this gorge song.

Like real talk, a lot of single men don't have clean towels or even a second set of bedding.

There is however no denying this song is an effing banger.

Academic reviews have even popped up about the song because you know, internet.