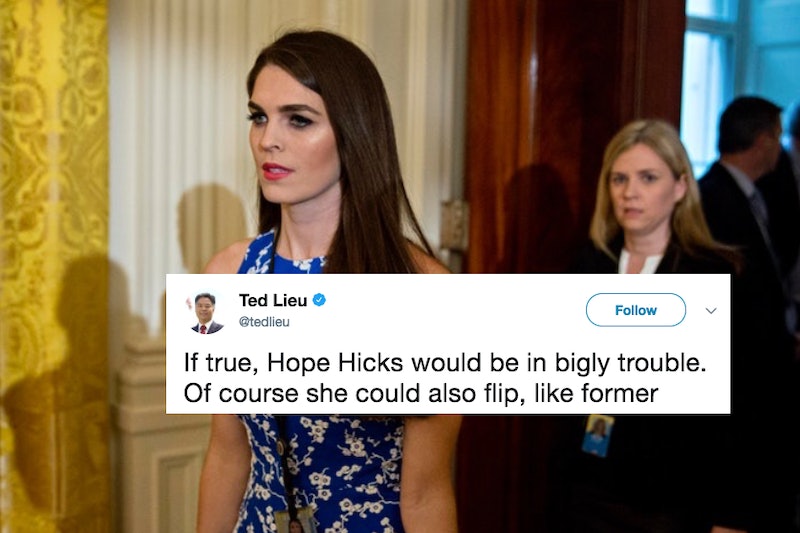 The Trump-Russia investigation thickens with a new name. On Wednesday, The New York Times dropped what could possibly be a big lead in the investigation: Mark Corallo, President Trump's former legal spokesman, is expected to tell special counsel Robert Mueller that Trump adviser Hope Hicks allegedly concealed incriminating emails from Donald Trump Jr. about that mysterious 2016 meeting with a Russian lawyer. Corallo's account reportedly details a previously undisclosed conference call in which Hicks reportedly promised that Trump Jr.'s emails "will never get out."

If Corallo's reported story is true, then Hicks could face legal repercussions for obstructing justice. Robert P. Trout, a lawyer representing Hicks, denied the claims, which came through various sources to The New York Times.

As most reporters know, it's not my practice to comment in response to questions from the media. But this warrants a response. She never said that. And the idea that Hope Hicks ever suggested that emails or other documents would be concealed or destroyed is completely false.

[Corallo] told colleagues that he was alarmed not only by what Ms. Hicks had said — either she was being naive or was suggesting that the emails could be withheld from investigators — but also that she had said it in front of the president without a lawyer on the phone and that the conversation could not be protected by attorney-client privilege.

People following the Trump-Russia investigation are now speculating that Mueller will target Hicks next, and under pressure, Hicks will ultimately betray Trump to protect herself. Here's what some Twitter users say:

More like this
Watch Jacinda Arden’s Devastatingly Honest Resignation Speech
By Sam Ramsden
What The UK Blocking Scotland’s Gender Recognition Bill Means
By Sam Ramsden
The Internet Can’t Get Enough Of Viktor & Rolf's Upside Down Dresses
By El Hunt
'Brookside' Is Coming Back & Soap Opera Fans Are Going Wild
By Sam Ramsden
Get Even More From Bustle — Sign Up For The Newsletter
From hair trends to relationship advice, our daily newsletter has everything you need to sound like a person who’s on TikTok, even if you aren’t.