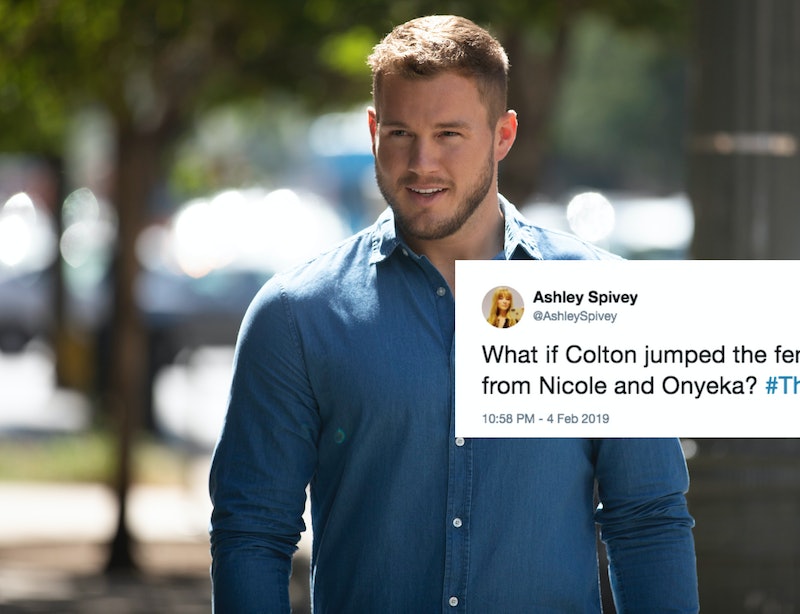 In all honesty, morale among Bachelor fans was not at an all-time high going into Colton Underwood's season. However, anticipation ramped up when the trailer came out and he jumped over a fence. The short clip was both impressive and dramatic. Now The Bachelor fans are waiting for Colton's fence jump. When is that happening?! It really felt like this Monday night would've been the night.

As soon as Colton commented about the night going well and described Thailand as "peaceful," it was clear the serenity wouldn't last for long. And spoiler alert: It definitely did not. Onyeka and Nicole continued their argument from the group date. Colton heard them yelling at each other from across the room. He went over to them and they basically ignored him for the sake of a pointless argument.

Colton walked away and the girls were concerned, but the Bachelor fans were more so excited. Sure, there are people who felt bad for him, but there were plenty of others who saw the writing on the wall. He was very upset, it was dark out, and he stormed out from the cocktail party. Those sound like the elements for the perfect fence jump scene, right?

Well, at least that's what a lot of the fans thought. Many people tweeted predictions about the fence jump on the way. Unfortunately, instead we were hit with a "to be continued" at the end of the episode and have to wait six days for another episode.

Not only that, but Colton doesn't take that leap until way further in the season. In a January interview with The Hollywood Reporter, Colton revealed that he jumps the fence during Fantasy Suites week. He explained,

"Fantasy Suites week was the biggest week in the whole entire journey. The jump was the most emotional and the most physical that I had to be the entire season. I will also say that fence jump is the most pivotal moment. That was a game-changer. That night changed how everything went."

Regardless, the fence jump was the talk of the night on Monday. Just take a look.