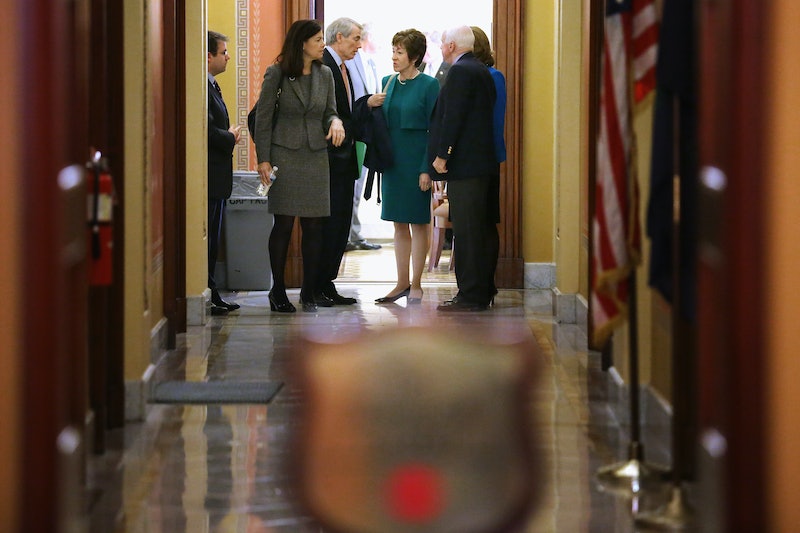 In the early morning of Friday, July 28, a trio of Republican senators voted no on the Senate's so-called "skinny repeal" bill aimed at undoing the Affordable Care Act. As a result, for at least the time being, the entire Republican health care effort seems to have crashed on the rocks. The three senators who broke ranks with their party did so in a hugely high-profile moment, although one of them showed up very late to the party. Twitter is not happy that John McCain is getting all the glory while Lisa Murkowski and Susan Collins were the real swing-vote heroes of the entire process.

Whatever you think of McCain, Murkowski, and Collins' politics generally, that they deserve some recognition for breaking ranks and defeating the repeal bill is undeniable ― after all, while Senate Majority Leader Mitch McConnell could return to health care at some point down the road, he did not sound optimistic about it in his speech immediately following the vote. It's possible (though again, not yet assured) that their votes put the kibosh on a full seven years of anti-Obamacare campaigning by the Republican Party.

It's also true, however, that McCain showed up very late to that party, dramatically deciding to vote no in a fashion that guaranteed he'd absorb the lion's share of the attention and glory. Murkowski and Collins, on the other hand, staked out their positions for weeks, bolstered by a huge amount of protest and public outcry. And in the opinion of many observers on social media, this shouldn't be overlooked.

1. Every Work Meeting Ever

2. Principled "No" Votes From The Jump

3. Held The Line All The Way

4. Press Will Focus On McCain

6. Doing The Right Thing From The Beginning

7. Women Save The Day Again

11. Doing The Right Thing All Along

12. Showed Bravery From The Start

15. Stalwart Women Who Refused To Budge

16. More Credit To Collins And Murkowski

17. At Least As Much Credit

18. Put A Sword Through This Monster

For the record, both Collins and Murkowski also voted against the initial motion to proceed earlier this week, while McCain cast a decisive vote in favor of it. Had the motion to proceed simply failed outright, then the GOP never would've come as tantalizingly close to passing the repeal bill as it did last night ― and McCain's dramatic, possibly career-defining moment never would have happened.

And yet, since he ultimately defected and joined with Murkowski, Collins, and the entire Democratic Senate membership in opposing the bill, that brief period of uncertainty (and huge anxiety for the ACA's supporters) could end up going unnoticed by history. Those who lived through the legislative drama firsthand, however, will likely remember that it was Collins and Murkowski who stood firm the whole way through.