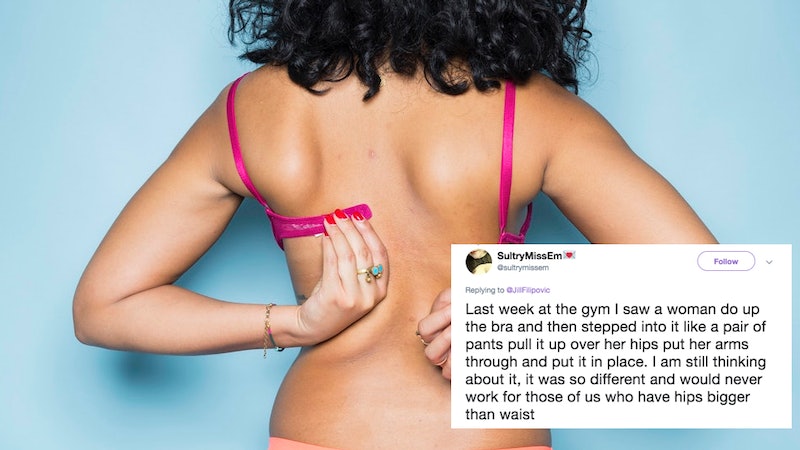 Anyone who has ever worn a bra knows that they're tricky contraptions. From getting your size right to finding the right style for that backless dress you love, the undergarment can be a mystery even to those who wear them. Now, a Twitter debate about bras has broken out, and the topic up for discussion is the best way to put one on. Seriously, bras are so confusing that even the act of putting it on your body is up for debate.

Twitter user @nakaimosu seems to be where the debate started. The account tweeted out an image from a 2015 Buzzfeed article of a woman putting on a bra in two different ways. In the first part of the graphic, she has the bra hooks in front of her chest, clasps them, and then swings the undergarment around so that the done clasps are now in the back. In the second part of the photo, the woman slides the bra on, cups first, and then reaches around her back to hook the clasps in place. The question? Which way is the correct way to put on a bra.

Back in the 2015 Buzzfeed article, the publication asked its readers the same question, and the result was that front claspers are the reigning champs. However, thanks to @nakaimosu's viral tweet the debate is raging once again, and the answers may just have changed.

Writer Jill Filipovic, in particular, had quite a few questions regarding the plethora of opinions on which way is the correct way to put on a bra. In her thread of tweets about the graphic, she seems baffled (as many also seem to be) by people who do neither option. Instead, they keep their bras clasped at all times and them pull them over their heads.

She certainly wasn't alone in her confusion about those who slide bras on like shirts.

While Filipovic may be hooked on (sorry, couldn't resist) the idea that some just put on bras like shirts, others were still in on the raging debate between the blue and red side of the original Buzzfeed graphic.

Some back claspers claimed muscle memory as the source of their ability to clasp a bra without even seeing it.

Others pointed out that breast size and the number of clasps effect which way you put it on.

One Twitter user has seen a bra application that seems practically impossible.

Caitlin Moran basically says it's all a lie, like the other lies people have been told about bras.

Really, though, put your bra on however you like. If people were to get really honest about their bras, the truth would come out that most don't wash them for at least a week at a time, everyone has a favorite one that has some sort of damage but they just can't get rid of it because it's so comfortable, and of course, the near religious belief that underwire is from Satan. Go ahead and step into your bra like a skirt, slide it on like a t-shirt, clasp it in the back, or twist it around, because whatever works, works.

More like this
15% Pledge Director LaToya Williams-Belfort On The Impact Of Supporting Black Business
By Dominique Norman
Harry Styles’ Red Carpet Looks Have One Thing In Common
By El Hunt
The Biggest Runway Trends From Milan Fashion Week 2022
By Allie Fasanella
Bella Hadid's Best Runway Looks Of All Time: From Paris, Milan, & More
By Allie Fasanella
Get Even More From Bustle — Sign Up For The Newsletter