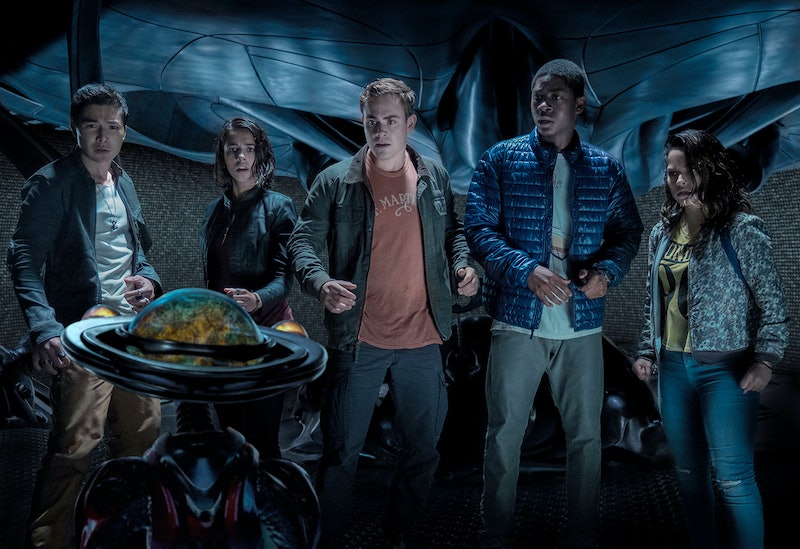 Calling all '90s kids, you're going to want to hear this. Despite all the talk of making the new Power Rangers reboot separate from the Mighty Morphin Power Rangers series fans fell in love with in the '90s, it turns out the new film won't be completely without any nods to the original show. Small spoilers ahead! Two of the original Power Rangers appear in the new movie, and their cameo will delight shippers everywhere.

Johnson and Frank played Kimberly Hart and Tommy Oliver, respectively, in the original series and the first major motion picture. Tommy Oliver was a particularly beloved character, who went from being introduced as a potential villainous Green Ranger, to joining the team as the White Ranger (note: he was the White ranger by the time Might Morphin Power Rangers: The Movie was released in 1995). Having Johnson and Frank as the only two cameos from the original series is notable for a couple reasons. The two actors are both still active in Power Rangers fandom, and in many ways, they were the leading duo of the group. Their characters, Tommy and Kimberly, were also the show's main ship, though romance wasn't really a main focus of the superhero series. For die-hard fans, their Power Rangers cameo is a nice indication that their ship is still sailing. But, there's also another reason their cameo is particularly relevant to the Power Rangers franchise.

Frank's cameo is, in many ways, foreshadowing where the Power Rangers story is heading beyond this film — slight spoilers ahead. The Power Rangers post-credits scene teases the arrival of a Green Ranger, something that made the cameo even more special, according to director Dean Israelite.

"Those were really the two that we thought were important to put in there and you know obviously we're teasing something at the end that relates to [Tommy] so it sort of all felt organic," Israelite said in an interview with Comicbook.

I think it's safe to say that Frank won't actually be reprising his role as the Green Ranger, but, still, it's nice to see him in a Power Rangers movie again. And who knows, maybe we'll get to see more Power Rangers returns in future films.

More like this
Everything To Know About 'Scream 6'
By Jack Irvin and Jake Viswanath
Everything To Know About 'The Hunger Games' Prequel Movie
By Grace Wehniainen and Radhika Menon
“The Door Is Always Open” For Another 'Breaking Bad' Spin-Off, Says AMC Boss
By El Hunt
Neil Patrick Harris Will Play 'Doctor Who's “Greatest Enemy” Yet
By El Hunt
Get Even More From Bustle — Sign Up For The Newsletter