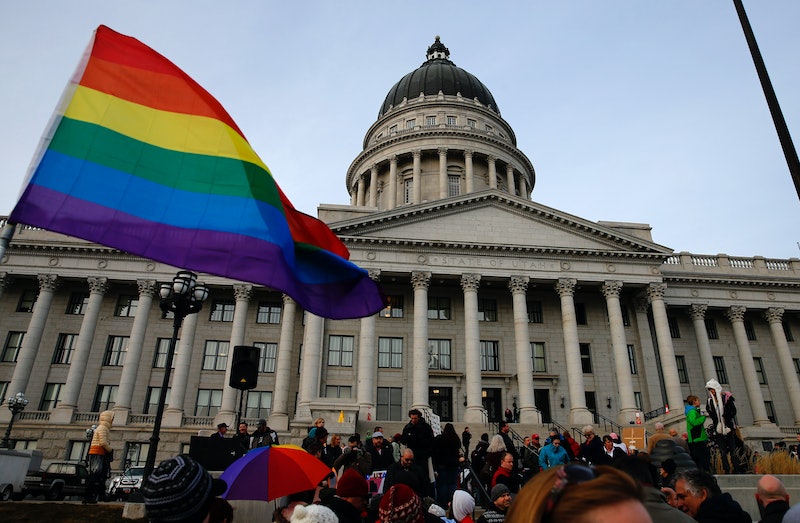 Years after equal marriage for LGBTQ couples became the law of the land, two Utah women were declared legally married — even after the death of one of the women. The surviving 74-year-old wife cried tears of joy when the judge handed down the sentence, The Salt Lake Tribune reported.

Bonnie Foerster told the judge that her partner Beverly Grossaint, who died at 82 in Salt Lake City in May, was her soulmate during the court proceedings. "I was born for her, and she was born for me," Foerster said.

The two had opted not to marry before Grossaint's passing for fear that Foerster's Medicaid could be affected; they also both had many medical issues that made tying the knot difficult in the years since equal marriage became legal in Utah on Dec. 20, 2013.

But being recognized as married meant a great deal to Foerster. "I’m numb from happiness. I’m married,” Foerster told the paper tears outside Corum’s courtroom after the ruling, unsuccessfully holding back tears. "I’m a married woman. I’ve waited 50 years."

Marriages can be recognized legally, even without a ceremony, as a common-law marriage in some states. In the state of Utah, this requires that two people live together, treat each other as married, and present themselves to the public as married. The judge, Patrick Corum, found that those requirements were met.

The Salt Lake Tribune reported that the ruling was decided so quickly that the judge had to clue Foerster in. “It means it’s done," he told her according to the paper. The judge then got down off the bench and gave Foerster a hug. “There’s no bailiff here,” Judge Corum reportedly said. “Don’t tell anybody.”

The ruling seemed to proceed as it would for any opposite-sex couple, except perhaps for the date from which the two are considered to have been legally married. The lawyer for Foerster suggested June 26, 2015, the day that the Supreme Court legalized equal marriage across the country. But the judge thought Dec. 20, 2013 would be more appropriate — the day these unions became legal in Utah.

Typically, the couple would have been considered married from the date that the conditions spelled out above were met. But since that would have been 1968 — the year the two moved in together — it makes things a bit complicated as marriage equality was not legal at the time. The judge in the hearing said choosing that date "makes it [legally] messier than it needs to be."

The two met in New York City when Foerster was fleeing an abusive husband. Foerster was wearing sunglasses to conceal a black eye. "Two seconds [after we were introduced], she came back and told me to take the damn sunglasses off," Foerster said, according to The Tribune. When she did, "[Grossaint] said, 'I can see your soul.' And I fell in love. I looked into her blue eyes, and I fell in love."

The couple was actively involved in the LGBTQ movement from the beginning, marching in New York City's first Pride parade. "We had people throw garbage at us," Foerster said in court. "We went home, took showers and got clean. Those people still have garbage in their hands."

That activism started a movement that would end up having her relationship legally recognized in court, just like anybody else. "You have to stand up for what’s right," Foerster said.

The courts are now doing just that.