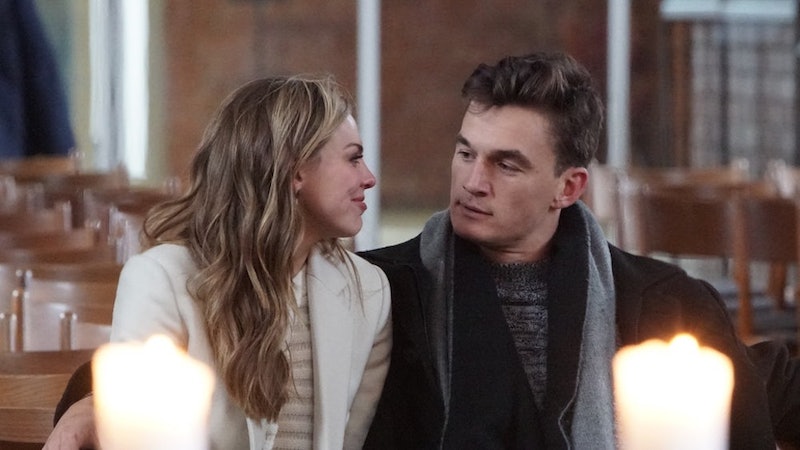 Monday night's episode of The Bachelorette was almost exclusively dedicated to the Men Tell All special, which gave some of Hannah B.'s former contestants the chance to talk with her and hopefully receive some sense of closure. However, like most of the season, Luke P. became the main source of attention and had a lot of negative remarks and criticism thrown his way. And while a lot of that anger is completely justified, Tyler C.'s latest tweet about Luke P. serves as an important reminder about forgiveness and growth. And yes, this also just further goes to show what a great guy he truly is.

Many could argue that Luke P. had this day coming for a long time. Throughout the course of the season he completed disrespected Hannah, repeatedly lied to the other guys, and used religion as an excuse to shame Hannah's character. Not to mention that he refused to leave after being asked to do so multiple times. Seriously. So. Many. Times. None of this is acceptable behavior, whether you're on national television or in the privacy of your own home.

And yet, it's still difficult — not to mention highly uncomfortable — to watch anyone get verbally bashed for almost two full hours. Maybe he deserved most of it (some of those takedowns were truly satisfying), but odds are that all that hate and anger won't help change him into a better person and learn from his many, many, many mistakes. Which is why Tyler's message to Luke took on a refreshing, and hopefully much more useful, approach.

"I can't help but have respect for anybody who goes on this show and puts themselves out there," Tyler wrote, adding:

"Your immediately placed on the chopping block for the world to come at you. I have made a lot of jokes about Luke, myself, and other cast members on this show. they were meant to be taken light heartedly and not seriously. Luke we may not agree nor do we have the same beliefs but I wish you nothing but success and growth in your future and hope you achieve all that you want to achieve in this world. No one should be condemned forever."

Luke P. responded to Tyler C.'s kind words by retweeting his post and tweeting back, "I want nothing but the best for you to brother! I appreciate this."

To his credit, Luke never let his anger get the best of him at any point during the Men Tell All special. In fact, he took the humiliation as best as anyone really could. However, that didn't prevent him from saying more eye-rolling remarks either (like how a man is supposed to lead and guide a woman in the relationship). Tyler's right, though. It took guts for Luke to come out and face everyone, knowing the kind of heat he'd receive in return.

Were any of his apologies sincere? Did he learn anything from this whole ordeal that'll help him grow as a person? It didn't really feel that way on Monday, but then again, changing your whole outlook on life could take some time.

In the meantime, let's just take a page out of Tyler's book and wish Luke the best — so long as it never involves seeing him on our television screens ever again.

More like this
10 Photos Of The Wildest Limo Arrivals From 'The Bachelor' Premiere
By Brad Witter
Hannah Ann Got Engaged 3 Years After 'The Bachelor' & The Proposal Was Dreamy
By Grace Wehniainen
Zach Reveals The Chaotic 30 Minutes That Were Cut From ‘The Bachelor’ Premiere
By Grace Wehniainen
Bachelor Zach’s “Dream Job” Has Nothing To Do With His Work In The Tech Industry
By Brad Witter
Get Even More From Bustle — Sign Up For The Newsletter
From hair trends to relationship advice, our daily newsletter has everything you need to sound like a person who’s on TikTok, even if you aren’t.