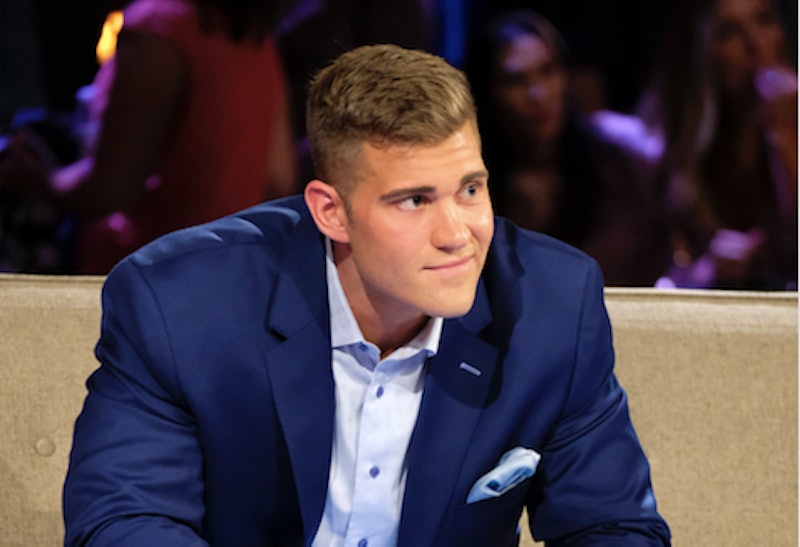 After a tense confrontation with Hannah last week and a season's worth of drama, Luke P. had a lot of explaining to do during Monday night's Men Tell All special. Neither host Chris Harrison or the rest of the men went easy on him, but midway through, Luke left the Men Tell All taping. So what's the deal? Could he not handle the heat, or did he, as Harrison said, genuinely have a flight to catch?

During the show, Luke had a lengthy talk with Harrison about his time on The Bachelorette. He said he was sorry for holding Hannah to such high standards, and for expecting her to be a "perfect woman," which admittedly isn't the greatest apology in the world. But it was clear that he didn't think he was that out of line — he said he didn't judge Hannah or do anything other than make a decision for himself. He also said he wouldn't change any of his behavior if he could go back, which he almost immediately backtracked, and that though he knows Hannah isn't his "person," he still loves her.

Overall, Luke kept his cool, and he apologized for some things. But he still managed to say that men are meant to guide a woman in a relationship... so, he didn't exactly do himself any favors.

When Luke's behavior was opened up for discussion, the rest of the men weren't remotely satisfied with what he said. Essentially, they all insisted he needed to show he's really learned and changed from the experience before they can accept any sort of apology from him.

Then, when Hannah came onstage to face Luke P., they continued to fight about their Fantasy Suite date. Luke claimed she told his youth group during hometowns that she wouldn't have sex in the Fantasy Suites, while she insisted she never said such a thing. She said she was tired of being slut-shamed and that Luke is "obsessed with sex," and it's clear she's ready to move on from their relationship.

So, given how things were going for him, it wasn't all that surprising when Luke left. But his departure actually might not be because he just wanted to escape the drama.

The day after Men Tell All was filmed, Luke posted a photo from a wedding in Georgia saying he'd "caught a red eye flight from LAX" to be there. So perhaps him leaving was as simple as him needing to get to the airport. Regardless of the reason he took off early, he probably wasn't too sad to go — there wasn't exactly anyone on his side at the taping.

Luke has been a polarizing figure since day one, and his time on The Bachelorette can basically act as a guide for what not to do on the show. Whatever the reason for Luke's early departure from Men Tell All, honestly, no one is complaining. And after a very long few weeks of seeing him on our screens, hopefully this truly is the last we see of him.