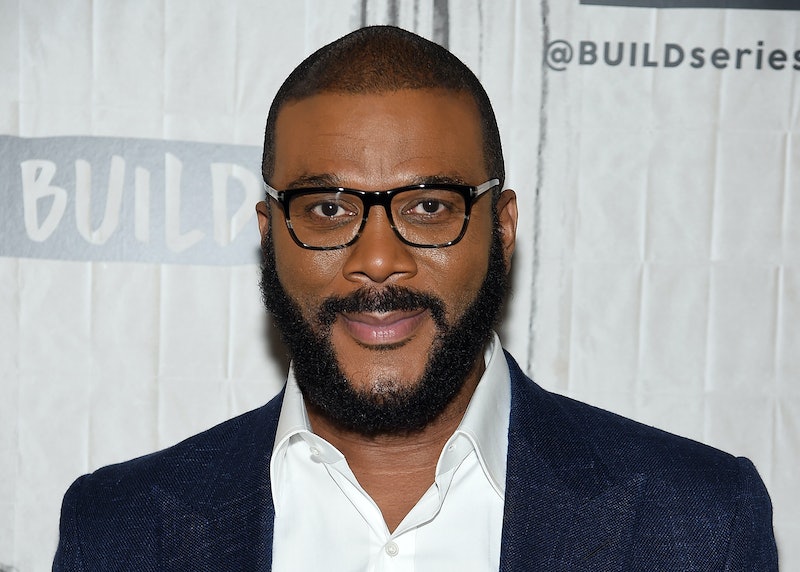 In an interview with CBS This Morning's Gayle King that aired on Oct. 8, Tyler Perry said that his studio will include a compound for LGBTQ youth and homeless and trafficked women and girls. Perry's studio — the first to be owned by a black individual — is based in Atlanta, Georgia, and officially opened over the weekend. But, as he told King, now that Tyler Perry Studios is officially open, his next step will be to create a place for LGBTQ youth and women and girls who don't have anywhere to go.

Speaking with King, Perry said he wanted to provide housing for those in need, as well as educational services. He explained his vision of having a place "where they’re [LGBTQ youth and homeless women and girls] trained in the business and they become self-sufficient, they live in nice apartments, there’s daycare." He continued, adding, "There’s all of these wonderful things that allows them to re-enter society and then pay it forward again." He hopes to start the project soon.

Perry has long been a supporter of the LGBTQ community. In March 2016, he spoke out against Georgia's House Bill 757. The "religious liberty bill" would've allowed faith-based organizations to turn away LGBTQ individuals. According to Deadline, a spokesperson for Tyler Perry Studios said regarding the bill, "At Tyler Perry Studios, we believe in inclusion and equality for all people. We do not tolerate bigotry, division and discrimination." The bill was eventually vetoed.

In addition to the compound, Perry told the Los Angeles Times he plans to build a six-lane highway along the back of the property for filming, along with a backlot and restaurants. "I want this to be a self-sustaining place where companies can come here and they don’t have to leave," he said.

The studio sits on the former Fort McPherson Army Base, something Perry called "poetic justice" in his interview with CBS News. "The Confederate Army is fighting to keep Negroes enslaved in America, fighting, strategy, planning on this very ground. And now this very ground is owned by me," he told King. Not only is it owned by him, it will soon become a space where women and LGBTQ youth can find shelter and a helping hand.

Perry is proud that he opened a major studio complex that will give people of color more opportunities and help out others, including LGBTQ youth and homeless women. "I hope it will set the example for other people of color, in every area but particularly in Hollywood," he also told the Los Angeles Times. "To direct movies, to get acclaim and win all these awards is great, but there’s something more important than that. What changes everything is ownership."

More like this
Adam Lambert Called Out The George Michael Biopic Over Potential Casting
By Sam Ramsden
Adam Ali Hopes 'Waterloo Road' Will “Subvert” Queer Misconceptions
By Sam Ramsden
Miss Thailand's Soda Tab Gown At The Miss Universe Pageant Had A Special Meaning
By Brad Witter
Twitter Is Identifying With Sally Field & Jane Fonda’s Friendship In New Viral Video
By Jake Viswanath
Get Even More From Bustle — Sign Up For The Newsletter
From hair trends to relationship advice, our daily newsletter has everything you need to sound like a person who’s on TikTok, even if you aren’t.