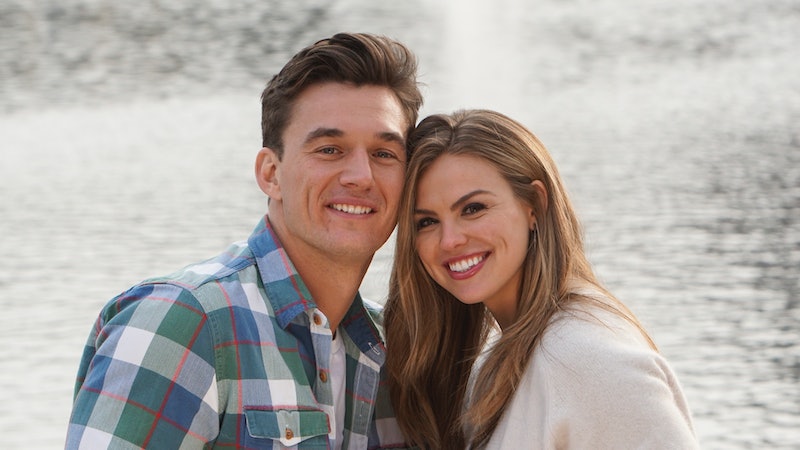 While some Bachelorette fans have been wishing and hoping that Hannah Brown and Tyler Cameron will live happily ever after together, they might have to keep waiting a little bit longer. In a recent interview with People, the runner-up opened up about where things stand with them now, and Tyler's feelings on dating Hannah post-Bachelorette might disappoint some fans.

Though Hannah turned down Tyler on the finale of the Bachelorette — which aired Tuesday, July 30 — in favor of accepting Jed Wyatt's proposal, the former pageant queen eventually called off her engagement after discovering that Jed had reportedly been dating fellow aspiring musician Haley Stevens when he came on the show. After Hannah and Jed split — and she declared that she was no longer in love with the musician during the After the Final Rose special — she came face-to-face with Tyler once more.

"I want somebody to be bold and I’m bold and I make bold moves so you’re an incredible guy and I’m a single girl," she told Tyler through giggles during the live special. "So… I don’t know. I thought maybe we could go for a drink and just hang out?" But while Tyler accepted Hannah's offer, he also explained to People that he doesn't want to rush into a romance with the Bachelorette star just yet.

"I cherish Hannah and value her and our friendship so much, but I don’t think it’s healthy for us to jump into anything right away," Tyler told the magazine. However, that doesn't mean he's completely ruling out the possibility of a romantic reconciliation: "I think we need to be friends and see where life takes us. Whatever happens, happens."

"I will always love and care for that girl," he told People about Hannah. "And I will always be her biggest fan and biggest supporter." In a separate interview with Nick Viall his podcast, The Viall Files, as reported by Entertainment Tonight, Tyler echoed those sentiments, saying that he was excited to meet with Hannah "to have a drink with her and just talk," with "no pressure for anything."

He continued, saying that it didn't make sense to end their relationship completely just because he didn't get the final rose. "I value and cherish our relationship and our friendship and that's something I don't wanna just cut off cold turkey because it didn't work out," Tyler explained to Nick. "[She's] someone I would hope to have a drink with and see what happens and take it one step at a time."

On the morning after the finale, Tyler also gushed on Instagram that he was "looking forward to that drink," so fans know he's serious.

Thankfully, it sounds as if Hannah is on the same page as her ex. She noted in an interview with People that she needs to spend time "repairing her heart" before she decides to enter another relationship. "Tyler will always have a place in my heart no matter what our relationship looks like. The feelings I developed for him were real and they don’t shut off instantly. And it’s hard to say [yet] what the future holds with him, or anyone else," she explained.

With all of the public attention on Hannah and her heartbreak right now, it's not surprising that both she and Tyler would want to take any possible future romances slow and focus on themselves right now. Whether they end up together or not, it seems as if both of them have made the right decision for themselves in this moment — and if that friendship just so happens to become something more, Bachelor Nation wouldn't be upset.

More like this
‘The Ultimatum: Queer Love’ Is Officially On The Way
By Radhika Menon and Kadin Burnett
Here’s When You Can Expect More ‘Indian Matchmaking’
By Brad Witter
Here's Exactly When Rachel & Tino's Fight Happened After 'The Bachelorette'
By Grace Wehniainen
Here's What Happened After Rachel & Aven Left The 'After The Final Rose' Stage
By Grace Wehniainen
Get Even More From Bustle — Sign Up For The Newsletter