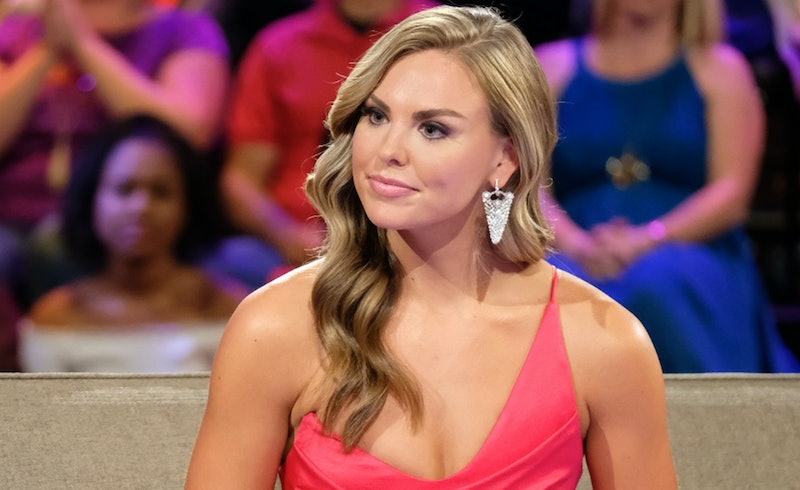 Now that the final rose has been awarded, and the engagement called off, Bachelor Nation is desperate to know why Hannah chose Jed over Tyler on The Bachelorette finale. Lucky for fans, Hannah Brown is opening up about her decision to get engaged to Jed Wyatt on The Bachelorette in a new interview with People magazine, and she's standing by her actions.

"I was immediately attracted to Tyler [Cameron], but I didn't take it seriously at first," Hannah told People in an interview published Wednesday, July 31. "I was so scared to get hurt by him. And I didn't know if he was really ready for [marriage]. Then I started to slowly break down. And [by] the Fantasy Suites, it wrecked me. I felt like I did a disservice because I hadn't allowed myself that time to be ready to be engaged to Tyler." She added, "He was the scary choice, and Jed was more familiar. In that moment, [choosing Jed] felt like the safest, best decision I could make."

That said, Jed wasn't just the safe choice. As Hannah explained the interview, he was the man she felt most strongly for in the moment. Even though she admitted to People that she did question her decision to get engaged to Jed during his proposal, she also said, "I felt like my heart was broken in four pieces, and Jed had the biggest piece."

As Bachelor Nation knows all too well, since the proposal was taped, it's been revealed that Jed wasn't really the safest or best decision. As revealed on The Bachelorette finale, shortly after accepting his proposal, the story broke that Jed had reportedly been dating fellow aspiring musician Haley Stevens when he came on The Bachelorette.

When the story broke in mid-June, the season was still in full swing, and the two stayed mostly silent on the issue until the finale, after it was revealed that Hannah had, indeed, given Jed her final rose. On Tuesday night, fans watched as Hannah confronted him about the story and while Jed has a different interpretation of events than Stevens, Hannah called off the engagement — noting how this was "not what I said yes to."

On Wednesday morning, Hannah appeared on Good Morning America and made clear that, regardless of how things turned out, she has no regrets. "I could "what if" and wonder what would happen if I made different choices, but ultimately, I found love for myself and I found that fierce love for me. And I think that that is worth it all because of everything that happened," Hannah said.

Besides, it seems like there's still hope for Hannah and Tyler, even though she gave Jed her final rose. She might have ended her season of The Bachelorette single, but she also left the door open for a possible future with Tyler when she asked him to get drinks with her on After the Final Rose.

Whether Hannah and Tyler will begin to date is up to the two of them. But it's good to hear that rather than rewrite history, Hannah is frankly explaining what her mindset was in choosing Jed. And by fully seeing her relationship with Jed through and being true to herself, Hannah got her own happy ending on The Bachelorette, even if it wasn't the one fans were expecting.