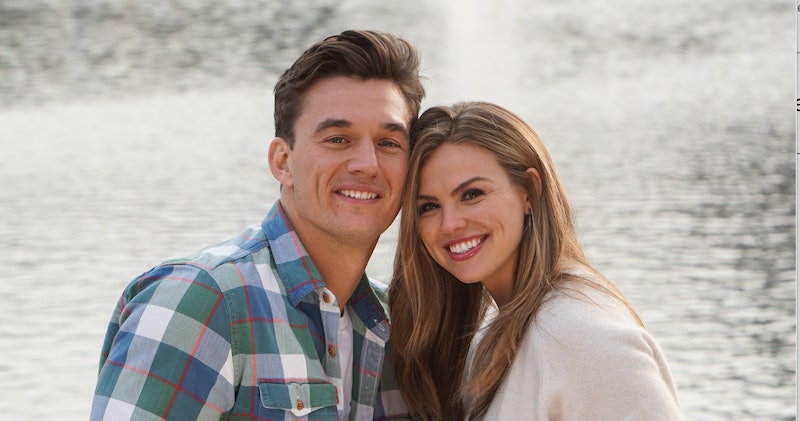 Despite all the chaos Luke P. brought to Hannah B's Bachelorette season over the last few weeks, one contestant has almost made it all worth it: Tyler Cameron. He's kind, considerate, and always manages to say exactly the right thing, which is why if things don't work out between him and Hannah, whether or not Tyler C. is dating anyone after The Bachelorette will be the first thing fans will want to know. Because if he doesn't end up with that final rose, there will be plenty of people waiting and willing to scoop him up after the show.

The Florida native initially started to stand out after his and Hannah's first one-on-one date. Hannah was feeling down about the whole Luke P. situation (as usual) and wasn't feeling like her typical bubbly self. Unfazed, Tyler comforted her and let her know it's OK to be bummed out sometimes. He wanted to get to know the real her, and that meant being with her through all the highs and all the lows. That sensitivity made him an immediate front-runner (and of course, it hasn't hurt that he's also ridiculously good-looking).

Tyler and Hannah's connection has only continued to grow stronger over time. Their chemistry has always been off the charts, which is why Hannah said she wanted to use their Fantasy Suite date to make sure their emotional connection was on the same level, rather than taking their physical relationship to the next step. Once again, Tyler affirmed he was there for the right reasons by completely respecting Hannah's decision and her boundaries.

All in all, he seems too good to be true, which is why it's hard to envision Hannah picking someone else. But if that ends up being the case, what does Tyler's current love life look like? A deep dive into his social media shows that he is extremely focused on his work with ABC Food Tours right now, which is described on its official website as an "experiential learning platform for students in NYC living in underserved communities that will educate, motivate, and inspire them to overcome life's obstacles."

A vast majority of his posts are centered around the organization and all of the great ways he's helping to contribute. That means several people pop up in his photos, but none of them seem to be romantic interests. So by all accounts, he appears to still be single... unless he's secretly engaged to Hannah.

Obviously, Tyler isn't able to post anything that would spoil how the rest of the season plays out, so even if he is with someone else, he wouldn't be allowed to say so. However, given how hard he's fallen for Hannah, if they don't end up together, he may need a little more time to process their breakup before jumping back into another relationship.

Then again, he could also be chosen as the next Bachelor, which would mean his days of living the single life could be coming to a close sooner rather than later.

More like this
This 'Bachelor' Contestant Got Back With Her Bachelor Nation Boyfriend After Going Home
By Grace Wehniainen
'Bachelorette' Vet Clare Crawley Unveiled 2 Special Wedding Day Accessories
By Stephanie Topacio Long
These 'Bachelor' Spoilers Suggest Christina Mandrell Is The New Villain
By Grace Wehniainen
Hannah Ann Got Engaged 3 Years After 'The Bachelor' & The Proposal Was Dreamy
By Grace Wehniainen
Get Even More From Bustle — Sign Up For The Newsletter
From hair trends to relationship advice, our daily newsletter has everything you need to sound like a person who’s on TikTok, even if you aren’t.