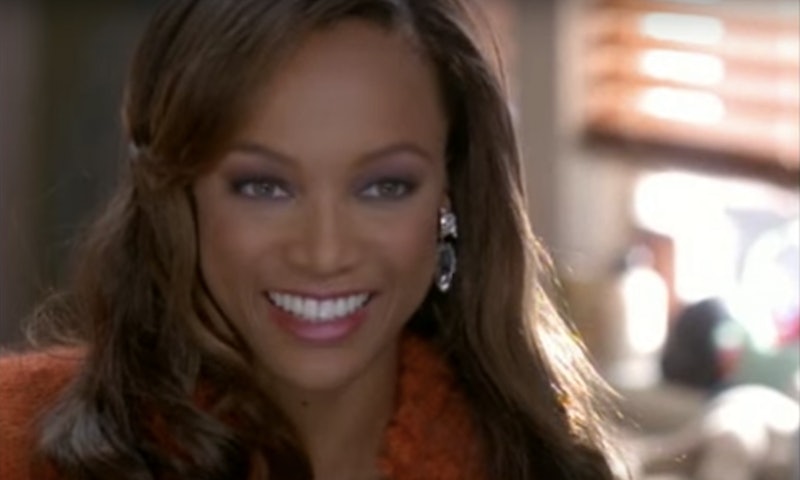 Life-Size 2 is officially happening, and it looks like production on the long-anticipated sequel is finally getting started.With the start of production comes casting news. On Monday, Freeform announced Tyra Banks' Life-Size 2 costar is Francia Raisa, according to Entertainment Weekly. Banks and Raisa are already on set for the movie's filming, which should delight Life-Size fans. Banks revealed the news in a tweet on Monday afternoon, when she posted a photo of herself with the Grown-ish actor.

"Now filming: LIFE SIZE 2. It's time y'all! You've waited long enough. Could not find one single woman more perfect to co-star with Eve than the magnificently fierce @franciaraisa. See you on @FreeformTV this holiday season! #LifeSize2 #ShineBrightShineFar"

While the Life-Size sequel was announced more than a year ago, details about the new movie have been scarce so far. Fans knew from Freeform's 2017 Upfronts that Banks would reprise her role as Eve, but it was a mystery who would star alongside the model, until now.

Lindsay Lohan co-starred with Banks in the first Life-Size movie, but it didn't seem likely that she'd be involved with the sequel. And based on this news, it looks like Lohan probably won't have a major role in Life-Size 2. That's not to say her character, Casey, won't make an appearance, though. Banks told Buzzfeed in April that she and Lohan had talked about the possibility of a grown-up Casey appearing in Life-Size 2. Banks told Buzzfeed at the time,

"We're working on the script now and I'm telling the writer I don't want her to just have a cameo. I feel like [Lohan] was just as important to Life-Size 1 as I was, so I want her to have a role, at least three or four scenes. I think she would play herself grown up — like, Casey in Life-Size grown up. So, we'll see!"

Keep those fingers crossed that a Lohan cameo is still on the table. In the meantime, the talented Raisa is a perfect pick to play Eve's new partner-in-crime.

For her part, Lohan doesn't appear to have weighed in on Raisa's casting, at least not yet. That doesn't mean fans are staying silent about her apparent absence, though. A quick scroll through the comments on Lohan's most recent Instagram post show plenty of messages from fans asking the star why she hasn't been cast in Life-Size 2.

But whether or not Lohan ends up having a role in the movie, Banks and Raisa are sure to make an iconic duo. Raisa is no stranger to feel-good movies and shows, having acted in projects like The Secret Life of the American Teenager, the ABC Family movie Christmas Bounty, and now Grown-ish.

Raisa posted the same photo on her own Instagram account, sharing in the caption how excited she was to be working with Banks. Raisa wrote on Instagram,

According to Just Jared, Raisa's character in Life-Size 2 will be Grace Manning, CEO of the toy company that made Eve herself. (If you haven't seen the first movie, Eve is a doll that Lohan's character, Casey, accidentally brings to life.) Just Jared reports that Grace is going through a "quarter-life crisis," and it sounds like Eve is the one who will help bring her out of her funk. If Eve can help Casey deal with her grief over her mom's death, she can help Grace with whatever she's going through, too.

There's another major detail that will excite fans of the original Life-Size. Banks shared with Entertainment Weekly in March that she's recording a new version of the movie's theme song, "Be a Star." The remix will surely be a banger for fans of the original 2000 movie, and it's just another reason to look forward to the upcoming sequel.