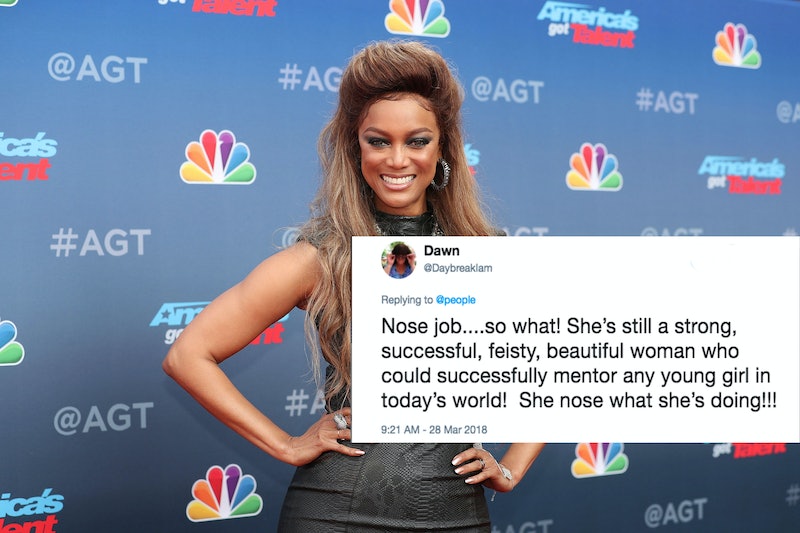 Tyra Banks isn't here for judging people about cosmetic surgery, and she's opening up about her own procedures to help shatter stigma. In a new memoir that she co-wrote with her mother called Perfect Is Boring, the super model shares that she underwent cosmetic surgery early in her career. Tyra Banks had a nose job, but she refuses to be ashamed about it.

“I had bones in my nose that were growing and itching,” Banks told People. “I could breathe fine, but I added cosmetic surgery. I admit it! Fake hair, and I did my nose. I feel I have a responsibility to tell the truth.”

Banks told People that part of the reason she is coming forward with this information after keeping it under wraps for decades is because she wants to start a more honest conversation about looks, and alleviate some of the stigma that surrounds women who take control of their own bodies. After all, there is a lot of judgement toward women who decide to undergo cosmetic surgery.

When someone gets cosmetic surgery, they get judged for being vain and shamed for being too concerned about their appearance. Some who support body positivity may also accuse them of not accepting themselves for who they are, which only adds another layer of guilt. There's a lot to process and no easy answers. Banks believes we need to be more honest and frank about our appearances in order to open up the dialogue and start unraveling those instances of judgement.

"If you like your natural self, don’t worry about it,” Banks tells People. “But if you feel insecure about something … I have a magic bag of beauty tricks to make you who you want to be. Permanent or temporary, I do not judge that.”

Banks also doesn't believe that wanting to alter your appearance in some way automatically means you're insecure. "Fix it or flaunt it — I think women should be able to do both,” Banks tells People. You could change yourself, and still love the person you are and how you look like.

For example, in 2007 Banks delivered the now-iconic "Kiss My Fat Ass" speech on her show after paparazzi and news headlines scrutinized her changing body. With headlines like "Thigh-ra Banks" and "America's Next Top Waddle," Banks got on stage with her swimsuit and told the camera, "So, I have something to say to all of you that have something nasty to say about me or other women who are built like me...women whose names you know, women whose names you don't, women who've been picked on, women whose husbands put them down, women at work or girls in school—I have one thing to say to you: kiss my fat ass."

When the news broke of Banks' history of cosmetic surgery, Twitter had mixed feelings about her statements. As predicted, there were some people who felt Banks should have embraced her nose and not changed it. Their view was that to change anything about one's body means that the person was influenced by beauty standards and felt less-than in comparison.

In that same vein, people believed she underwent cosmetic surgery because she was judged for her nose.

Some commenters felt that it wasn't fair for her to be a judge on a modeling show if she herself wasn't a "natural" beauty, since she altered her appearance and got a "leg-up" in that way.

Others pointed out that while she was a judge on America's Next Top Model, she herself would call out contestants who weren't natural, which was hypocritical.

While there were some negative comments, there were just as many supportive ones. Many people felt that the decision was hers, and that it didn't take away any of her achievements or worth.

In sharing her story on her own terms, Banks is opening up a dialogue about how woman should be able to make her own decisions about her body, and how wanting to change it doesn't necessarily mean she doesn't love herself. There's more than one right way to embrace yourself. The more honest we are about our looks and how we judge each other on them, the more progress we can achieve.