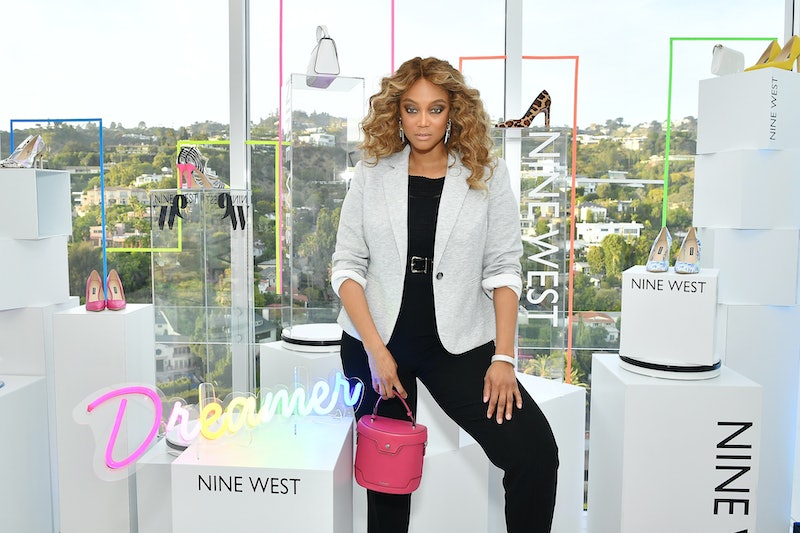 It’s been 20 years since Tyra Banks starred in Life-Size, the Disney film in which she plays a doll named Eve who comes to life and befriends a young Lindsay Lohan. If you ever wondered how Banks and Lohan got along back then during shooting, well, it sounds pretty sweet. “On weekends, Lindsay and her sister Ali, and her brothers Michael and Cody, would come to my apartment and we'd pop popcorn and watch movies,” she tells Bustle. “And every now and then I'll be on social media and I'll see all of them. And I'm like, ‘Whoa.’ They're children in my brain. I can't believe they're adults now. It's weird.”

It’s not just the Lohans who have grown. Since Life-Size, Banks and her post-modeling career have flourished. She went on to create America’s Next Top Model, host her own Emmy-winning, eponymous talk show, and partner with fashion brands she admires, like Nine West, of which she became its global brand ambassador in 2019. Banks is also the author of two books, including the New York Times bestselling novel, Modelland. Now, she’s launching a whole new venture inspired by it. ModelLand, which is set to launch in Los Angeles later this year, is an experiential attraction where attendees can be the star of their own photoshoots, complete with makeup, wig, and wardrobe styling.

Pop-up installations and immersive experiences have been everywhere in recent years, but Banks promises ModelLand won’t be like anything you’ve experienced before. “I've created this place where any and everybody can come and be the fantasy versions of themselves, and be the star of their own show. There's theater, there's photoshoots and these kind of runway situations...It's so hard to explain until you come and see it, but it is like something that has never been done before,” she says. In other words, this ain’t your momma’s Insta-trap.

Aside from the whole model fantasy aspect, Banks says the idea for ModelLand came from the hardships of her own career. “Being told no, I can't do something because of the size of my body or the color of my skin, has created a lot of pain and anger and wanting to bust open doors, not just for models, but for women everywhere to look and feel beautiful, and for their beauty to be validated,” she explains. Banks and her team made sure the technology at ModelLand would reflect the importance of inclusivity by using a lighting process that automatically changes based on skin color — something that, if you've ever been to a typical pop-up experience, tends to be overlooked. “One of our slogans at ModelLand is ‘phones down, smize up,’” she says. “We've got the cameras covered.”

Being a veteran of the fashion industry, Banks surely has some opinions on all the current clothing and accessory trends that we’ve been inundated by, both old and new. The one trend she’s glad hasn't come back around? Low-rise jeans. “I'm happy that a low, hip-hugging jean is over because I have a long booty crack, and I don't even have to bend down to fix a pipe under a sink for my ass to show,” she says. “It's like, ‘Thank god, the inseams are rising. Thank god.'"

Read on for Tyra’s thoughts on everything from dad sneakers to sassy sequin hair clips.

Little Women might help keep last year’s prairie-inspired trend around, but does Banks agree? “I think they're nice. Let some air in there, nice little air. Good for the weather now, but not necessarily for super winter. But yeah, the prairie dress can stay,” she says.

Don’t get rid of that boiler suit just yet. Tyra has always been “obsessed” with jumpsuits. “There was one season of America's Next Top Model where I only wore jumpsuits, like every single judging was a jumpsuit,” she says. However, she has to admit that it has its cons. “When you’ve got to go to the bathroom that's a whole 'nother story. I just feel like somebody needs to invent a jumpsuit that has a way where you can go to the bathroom without having to get naked.”

“I love a beaded purse. It actually reminds me of me doing the red carpet when I was 17,” Banks says.

As for the classic slip dress, Banks is conflicted. “I love them...loved them a bit more when I was a little thinner because they show every lump and dump and dimple," she says. “And sometimes they're a little bit too short to put a support underneath them. I have to wear a bra, and then my strap is showing, and that's not the look of the '90s slip dress with the bra strap showing, unless you kind of get back into the Kate Moss or grunge days, but...I just need too much support. But I like it on other people.”

“I just bought five headbands,” Banks admits. “I feel like with a headband, there's a youthfulness that it brings to the face and it probably just hearkens back to when we were little girls wearing headbands.”

“Oh, the ones that say, ‘I'm fierce?’ You can imagine I've gotten a lot of those,” she admits. “I'm like, ‘Come on. You have to know that I have a drawer full of rhinestone hair clips that say fierce.’ Come on now.”