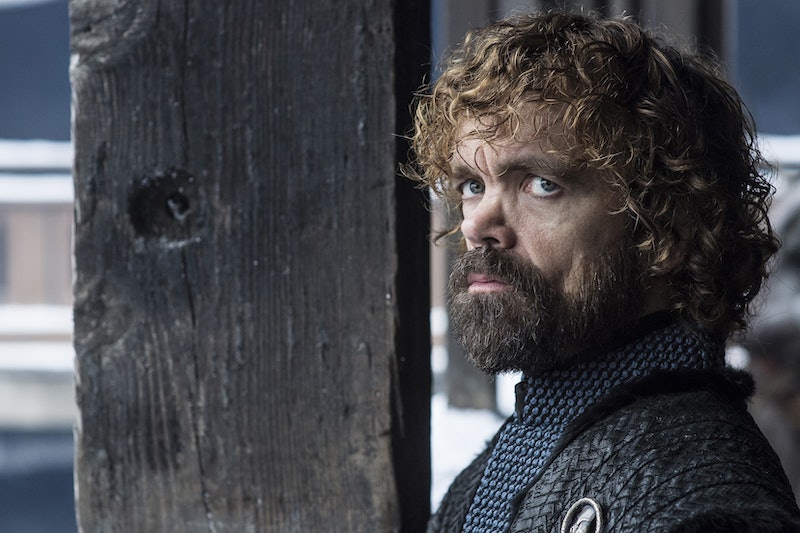 Tyrion Lannister has long been one of the biggest fan-favorite characters on HBO's blockbuster fantasy series. But Tyrion and Sansa's Game Of Thrones Season 8 reunion should give viewers reason to worry about the Hand of the Queen. His portrayer, Peter Dinklage, has been the top-billed member of the cast ever since Sean Bean's exit at the end of Season 1, and he's still the only Thrones actor to win an Emmy — pulling in three trophies so far for Seasons 1, 5, and 7. But the Thrones Season 8 premiere, "Winterfell," officially proved something fans have feared for a few seasons now: Tyrion is officially off his game.

In the first episode of the final season, the youngest Lannister finally came face-to-face with his… wife? ex-wife?… for the first time since Joffrey's wedding at the beginning of Season 4. ("It had its moments," Sansa said of the deadly nuptials.) But whatever small shred of affection might have existed between these two characters disappeared when Sansa realized that Tyrion had been duped by Cersei. Although he announced to the assembled Stark/Targaryen forces that the Lannister army would be joining them to face the Night King, Sansa knew better than to trust the murderous queen. Why doesn't Tyrion. "I used to think you were the cleverest man alive," Sansa told him, not bothering to hide her disappointment in her former husband.

For supposedly being one of the most brilliant thinkers and tacticians in all of Westeros, Tyrion sure has been racking up a lot of Ls lately. In Season 6, he stubbornly decided to negotiate with the slave masters of Astapor, Yunkai, and Volantis in Daenerys' absence — stubbornly refusing to listen to either Missandei or Grey Worm, two people who actually had first-hand experience with the masters. Unsurprisingly, that plan blew up in his face when the masters immediately broke their truce and laid siege to Meereen. Tyrion's botched plan was only salvaged by Daenerys showing up at the last minute with Drogon and the Dothraki to lay the masters' forces to waste.

In Season 7, Tyrion counseled Daenerys against a quick (and undoubtedly bloody) of Westeros. Against her own better judgment, and the advice of Olenna Tyrell, Daenerys agreed to simply lay siege to King's Landing with the Dornish army while taking Casterly Rock with the Unsullied. This convoluted two-prong attack resulted in the loss of most of their Greyjoy ships, the deaths of the Sand Snakes and Olenna Tyrell, the capture of Ellaria Sand and Yara Greyjoy, the stranding of the Unsullied in a tactically worthless castle halfway across the continent, and the loss of Highgarden and its valuable supplies of food and gold… and, most importantly, it got Daenerys no closer to taking the Iron Throne.

You may also remember the absurdly bad plan in Season 7 to go beyond the Wall to kidnap a wight in order to take it to Cersei and convince her to join their fight against the Night King. But did you remember that plan was Tyrion's idea? That foolhardy excursion led to the death of Thoros of Myr, one of only two characters on the show with the power to bring people back from the dead and, far more crucially, the death — and subsequent icy resurrection — of Viserion, one of Daenerys' three dragons, her most powerful weapons and cherished children.

Not only that, but Tyrion then fell hook, line, and sinker for Cersei's ploy, sincerely believing (for some bizarre reason) that his sister would actually uphold her vow and send help, not realizing that she was plotting to betray them all.

What is going on with Tyrion? Where's the man who weaseled his way out of captivity in the Eyrie? The man who cleverly played the members of the Small Council in order to root out a mole? The man who brilliantly planned the defense of King's Landing in the face of seemingly impossible odds? In retrospect, the turning point for the character was clearly the Season 4 finale, in which he killed Shae and Tywin before fleeing Westeros. Ever since he landed in Essos in the Season 5 premiere, the character has never been the same.

To be fair, it makes sense that a person would no longer be the same after strangling their lover in a fit of passion and then murdering their father in cold blood. An act like that should change you. It certainly changes the character on the page; in George R.R. Martin's A Dance With Dragons, Tyrion is a shadow of his former self, a bitter and resentful person, constantly brooding about the father he murdered and the lover that father stole from him. It makes sense that the showrunners wouldn't want to turn Tyrion — one of their most lovable characters and most reliable sources of quippy one-liners — into someone so unpleasant to be around. But by excising the lingering effects of his trauma, the show doesn't explain why Tyrion is suddenly so bad at what he used to be so good at.

Most of Tyrion's miscalculations over the past few seasons have to do with his complicated feelings towards his family: his continued resentment of Tywin, his love for Jaime, his hatred of Cersei. His desire to take Casterly Rock probably had as much to do with wanting to reclaim what he sees as his birthright, which Tywin so cruelly denied him, as it did any effort to put Daenerys on the Iron Throne. His misplaced trust in Cersei's alliance has more to do with his faith that Jaime could appeal to her better nature than any faith in Cersei herself. Could those complicated feelings towards his family have resulted in yet another huge miscalculation?

In the Season 7 finale, Tyrion met with Cersei one-on-one after his sister walked out of the armistice. Mysteriously, the scene cut out immediately after he discovered Cersei was pregnant, and viewers never saw exactly how Tyrion talked her into agreeing to the truce (or at least appearing to agree in the truce). Later, one of the most heavily-debated shots in the finale was the inscrutable look on Tyrion's face as Jon and Daenerys consummated their attraction on the ship bound for White Harbor.

One popular fan theory is that, upon learning of Cersei's pregnancy, Tyrion promised his sister that her child would be spared and groomed to take the Iron Throne after Daenerys. In the episode immediately before, Tyrion had expressed concern over the line of succession, since the dragon queen hasn't produced an heir. That could explain his worried look on the ship: if Daenerys does produce her own heir, that would complicate the secret pact Tyrion already made with Cersei.

If that theory turns out to be correct, it will be Tyrion's worst plan in a series of very, very bad plans. Is there any way for the beloved character to redeem himself with only five episodes to go? There seem to be two options when it comes to Tyrion's recent run of poor decision-making. The writers could be setting him up for a big win at the end, giving him a series of painful losses to make that final victory all the sweeter. On the other hand, they could be setting him up for a big defeat at the end, as all his chickens come back to roost. On Thrones, characters are often undone by their fatal flaw: Ned's honor, Robb's oath-breaking, Oberyn's hubris. Is Tyrion's fatal flaw his over-confidence in his own "clever" plans, even as they continue to unravel all around him?

Not everyone is going to make it out of Season 8 alive; many fan-favorite characters are destined to die before the end. Unless Tyrion steps up his game, he could very well be one of the ones with a target on his back. After all, when you play the game of thrones, you win or you die… and Tyrion hasn't done a lot of winning lately.