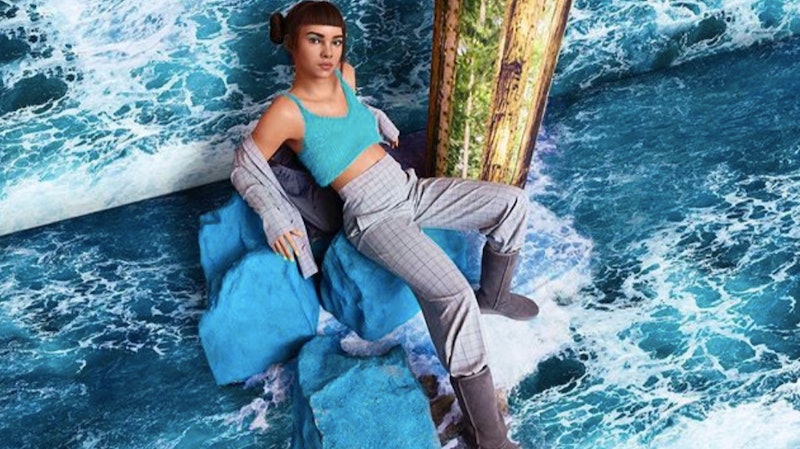 It's no secret that technology is capable of doing the unthinkable. Between Instagram filters and FaceTune, there's an endless amount of resources to change your online appearance. Most are worried about deleting a pimple from their face, but others depend on augmented reality to even exist. Instagram model Miquela Sousa, who's featured in Ugg's latest ad campaign, is just one example.

What's mind-boggling about Ugg's newest brand ambassador is that she's an online personality, but not an actual person. The CGI model is a simulation created by Los Angeles start-up, Brud, and has amassed over 1 million followers on Instagram. That's not bad for a Pixel Perfect influencer.

Despite Sousa not having head, shoulders, knees, and toes in the physical aspect, all of her ideals are what made her a chosen candidate for Ugg's 40th anniversary campaign. Sousa recognizes a Brazilian-American background as well as advocates for body positivity, trans rights, Black Lives Matter, and the rights for undocumented immigrants. Regardless of the fact that she doesn't physically exist, she's representative of a lot of people.

The 19-year-old cyber model looks picture perfect in her iconic Princess Laya-like buns for the footwear campaign. And as weird as it sounds, she fits seamlessly into her real-life environment.

Featured in this month long Ugg campaign alongside lil Miquela were two actual, human models. Founder of Gurls Talk Adwoa Aboah, a model herself, DJ and designer Heron Preston, and actor and model, Luka Sabbat were also there to show some Ugg bootie footwork to celebrate the brand's anniversary.

Do these boots speak to you this holiday season? Because they might belong in your shopping cart for gifting.

By the brand's standard, Sousa is a face that reps an “entire generation that is revisiting identity, reality and storytelling”. Working with other advocates, like Aboah in the campaign makes it one that show Millennials and the power of their voices, whether real or generated on a laptop.

This isn't the first of Sousa's involvement walking the tightrope of being digital and real life. She was featured in the pages of V Magazine'sV112 for her first editorial spread styled, where rather than her pigtails, she sported a bob with baby bangs.

Fans saw more of the the model simulation supported by Prada in its promotion using gifs, and Instagram Story Sickers to coincide with the brand's Fall 2018 collection. But the CGI model's talents don't stop with posing.

Recently, she's been put on to the music scene and paved a way for herself. She released a song to shake off negativity called "Hate Me" as a letter to her haters who consistently speak ill of her in her Instagram comments. If only everyone had that kind of studio time to vent.

Despite the controversy surrounding Miquela's prescence both online and offline, she is someone who speaks to the thoughts of millions with her platform. While she may be an enigma of a person(?), there's no denying that she gets across important messages while slaying in style. Bots just got it like that.