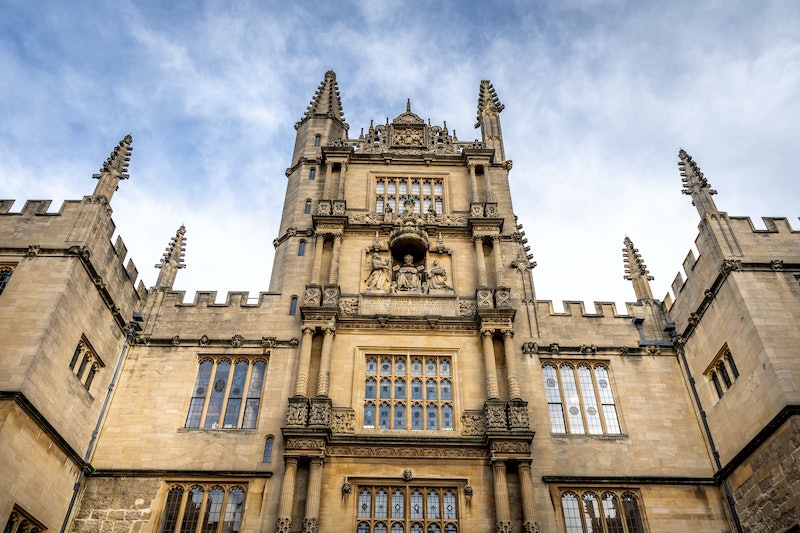 Last year, Oxford Union came under fire when blind working-class Ghanian student Ebenezer Azamati was dragged out of one of its debating events. Brendan McGrath, the president of the union who has since stepped down, went as far as to call for a disciplinary meeting in which Ebenezer Azamati was charged with “guilty and violent” conduct.

Azamati told the BBC that after the incident he felt "unwelcome in the union, Oxford and even the country." Although Oxford Union is actually a debating society, and separate to the University, its members are mostly Oxford students. The way the situation was dealt with by these students has sparked questions about inclusivity at UK universities, especially in regards to race, class, and disability. But this isn’t the only incident in recent years to happen at a university in the UK. So why do they keep happening? And do student unions, university societies, and perhaps the universities themselves have an inclusion problem?

Universities are meant to be places of education and inclusion in which to practise navigating society. But in reality, research shows that UK universities still have serious inclusion issues. A report by the government’s Equality & Human Rights Commission found that 1 in 20 students had left their studies due to racial harassment in the 2018-2019 academic year. It also discovered that a quarter of students from minority ethnic backgrounds, including non-British white students, had experienced harassment since starting their course at university. As the Guardian reports, black students reported the highest rate of racial harassment (29%). In light of this, when looking at the case of Ebenezer Azamati, it’s hard to ignore how his identities as both a black and disabled student may have intersected to compound exclusion. As Kamal Mohamed of the NUS Disabled Students Campaign puts it, “black disabled students experience systemic oppression in a way that is distinct from how either black or disabled students experience it.” Chloe Tear, a disability blogger and former SU Disability Officer, tells me what happened to Azamati was “completely unjustified and illustrated that work still needs to be done.” She adds: “Disabled students should just be seen as students, they pay the same amount of money to be there and deserve to be able to reach their potential.”

But how does an incident like the mistreatment of Azamati happen in the first place? I spoke to Sofia Akel, race equality in higher education specialist and associate lecturer, to find out. She explains that university societies are “semi-autonomous” groups for recreational activities outside of academic work – whether that’s Quidditch, knitting, or debating. Student unions, meanwhile, are run by representatives elected by students and are there to offer students support. Official societies have to be affiliated with their student union. What that means is the student union can make sure they have enough funding (in other words, "they do their accounting," Akel says). However, if societies want to, they can also disassociate from the union, which means “they’re free to do what they want to do,” explains Akel.

When universities take too long to acknowledge these issues or intervene, students are fighting back using social media and the press.

Whether it’s racist WhatsApp messages from members of Exeter’s law society or Bristol University Cheerleading Society’s “chav” social, there’s no shortage of examples of offensive and exclusionary behaviour at UK universities. And it’s not the first time Oxford Union has come under fire. Journalist Afua Hirsh, who is also an Oxford alumni, said in an article about Ebenezer Azamati from November last year, “Oxford Union has a history of racism it has never acknowledged, which continues to infect its atmosphere and debates to this day.” Back in 2015, Oxford Union debating society was accused of racism after naming a cocktail served at a debate about the British Empire “colonial comeback.” It led to the Oxford Union BME officer, Esther Odejimi, resigning from her role. In a statement to Cherwell, Oxford University’s independent paper, she said: “It’s clear that my role was just an act of political correctness and they had no intention to actually engage with the BME rep position. I want nothing to do with them at all. I’m disgusted. Racism is definitely not dead.”

McGrath, Oxford Union's president at the time, apologised for his handling of Azamati's treatment and stepped down. He wrote in a statement: “For all of my shortcomings, and all of my mistakes, I apologise profusely and unqualifiedly.” Meanwhile, the Union also apologised to Azamati for the distress caused, the BBC reports. And in 2015, Oxford Union passed a motion condemning itself as racist in response to the "Colonial Comeback" cocktail incident.

As Akel puts it, "What do you do when you get a student society that's racist, classist, or ableist and it then gets reported to the student union that is also perpetuating the same discrimination?" It seems societies are part of a feedback loop characterised by a lack of accountability. Akel herself has written about racism within Students’ Unions. During her time at Lancaster University, Akel was the Vice President Welfare and Community Officer, fighting for race equality. She says: “What I didn’t realise is that I’d be fighting a war at my university and in my students’ union.” She has since gone on to create a report Insider, Outsider detailing how race shapes the experiences of BME students at Goldsmiths.

Now, however, students are fighting back. When universities are taking too long to acknowledge these issues or intervene, they use social media and the press to speak out where they might otherwise not be heard. “Students were going straight to the press with issues of racism instead of their universities,” Akel explains. This was the case for Faramade Ifaturoti at Warwick University, Akel notes, who said her flatmate had written racist words on her bananas back in 2016. Ifaturoti claimed that despite reporting the incident to her resident tutor, per Warwick student newspaper The Boar, only after a hashtag was created and accusations went viral did Warwick University take action. They tweeted: "@Faramade_ we're really sorry you've had to experience this, it is completely unacceptable - please DM us your email + we will escalate," and later launched an investigation, per the Independent. Ifaturoti tweeted her university at the time, “I’m highly disappointed that it took a Twitter escalation in order for you to respond.” Warwick University disputed her version of events, per The Boar.

"Universities are doing more but the bar is already quite low, so we have a long way to go before we start celebrating successes" - Sofia Akel

In 2018, The Snowsports Society at Lancaster University, came under fire for a T-shirt social where participants were photographed at the Student Union club wearing tops with slogans mocking child abuse and sexual abuse. Here again, it was other students who came forward initially to call out the behaviour by speaking to publications like the Independent. Following the incident, a code of conduct panel appointed by Lancaster University Student Union placed the Snowsports Society under sanctions, requesting they make a formal apology and implementing a two-year probationary period.

But this issue isn't just about race and inclusion. A Cambridge society was criticised in 2018 when an anonymous student came forward on Grudgebridge — a Facebook page for students of the University to air their “grudges” — detailing the alleged sexual misconduct, bullying, and classism in drinking societies. One of the comments on the post on the Facebook page reads: “[These drinking societies] reinforce the old-boys club perception that the general public has of Cambridge. We are one of the best universities in the world and should do our best to erase rather than entrench class divides.”

As Akel puts it, universities are a reflection of society, they “don’t exist inside a vacuum.” But while both she and Tear believe things are slowly getting better, they agree it’s still not enough. Tear explains: “Having Disability Officers on Student Councils is a great step and this position should be used to maintain and improve the university experience for disabled people,” but, she adds, “lectures need to be open to the idea of reasonable adjustment and the university needs to be accessible.”

Meanwhile, Akel explains: “Universities are doing more but the bar is already quite low, so we have a long way to go before we start celebrating successes.” Student Unions can also do more — a 2015 report showed 95% of SU senior management teams were white. But Akel has some ideas for how they can improve: “Unions need to do some meaningful reflection, do some research, get a race equality expert that belongs to those protected characteristics as well. They need to do research into their own institutions and the way that they themselves are perpetuating inequality." She adds, “But most importantly, they need to be ready, open and supportive of that person's role as we see too often that token hires, put specialists into toxic, dangerous and often racist spaces."

It’s really the activism of the students at these institutions that's the true shining beacon of hope. The Why Is My Curriculum White? Campaign founded at UCL has spread to universities across the country, as have movements trying to decolonise campuses. There’s been an anti-racist occupation at Warick University, and, after 137 days, the anti-racist occupancy by students of colour at Goldsmiths finally had its demands met by the university. Although change is slowly happening, universities still have a way to go and it shouldn’t take stories of students’ mistreatment going public for action to be taken.

More like this
Gen Z Are Twice As Likely To Identify As Queer, According To New Data
By Sam Ramsden
Here’s Where The NHS Nurses’ Strike Currently Stands
By Sophie McEvoy
Pret & Costa’s Coffee Is The Strongest On The High Street, According To Which?
By Sam Ramsden
This Is When Netflix Is Going To Start Charging You For Sharing Passwords
By Darshita Goyal
Get The Very Best Of Bustle/UK
Sign up for Bustle UK's twice-weekly newsletter, featuring the latest must-watch TV, moving personal stories, and expert advice on the hottest viral buys.