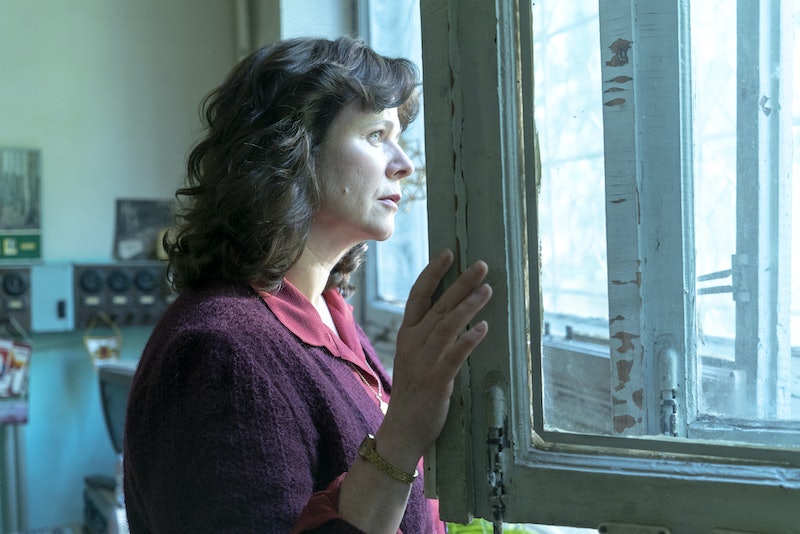 Liam Daniel/HBO
By Caitlin Gallagher
May 6, 2019

As you may expect from a miniseries set in the Soviet Union during the 1980s, there isn't much diversity or female representation in HBO's Chernobyl. But one of the few women in power is Emily Watson's Chernobyl character Ulana Khomyuk. Ulana is a nuclear physicist who investigates what led to the real-life explosion at the Chernobyl nuclear power station in Pripyat, Ukraine. But while Watson's costars Jared Harris and Stellan Skarsgård depict people from history, Ulana never existed. Yet, Chernobyl creator Craig Mazin explained to Variety's TV Take podcast how the character of Ulana still represents a very real part of the scientific landscape in the Soviet Union at the time.

With the Chernobyl accident occurring in 1986, there's actually a fair amount of documentation about the human-created catastrophe. And Chernobyl writer Mazin told Variety how much research he did for the series. But while he noted how the show is "accurate to how dude-heavy Chernobyl was" due to many women not being in positions of political power, he created Ulana to reflect the real-life women who were prominent in medical and science fields in the Soviet Union.

"Very few women were ever in the kind of overall ruling political body of the Soviet Union," Mazin told TV Take. "But one area where the Soviets were actually more progressive than we were was in the area of science and medicine, particularly medicine. The Soviet Union had quite a large percentage of female doctors."

Smithsonian.org wrote in 2013, "Between 1962 and 1964, 40 percent of the chemistry Ph.D.s awarded in Soviet Russia went to women" compared to America's five percent. And as of 2012, the U.S. still hadn't achieved that 50-year-old statistic. The 2014 study "Women's Participation in the Medical Profession" also noted how, "Russia differs from much of the West in that since the 1950s, women have comprised approximately 70 percent of the physician workforce." And as Mazin explained in the podcast, this wasn't simply because the Soviet Union was more progressive than the West — it was also out of necessity.

Mazin noted how the Soviet Union lost millions of men during WWII and so women began to fill positions they had never had the opportunity to do before. "And yes, they were absolutely included in positions of science," Mazin said. "And so I wanted to be able to show that and this was one area where I could do it authentically and historically."

As Mazin tweeted above, each of the five episodes of Chernobyl will be accompanied by a podcast episode. So you can learn more about the history — and where he strayed from the true details — through there. But he told TV Talk that Watson's character isn't simply one woman in the Soviet science field. "She represents all of these other scientists that came in and risked quite a bit to fight a system — not just the system of government, but also the system of science, which in and of itself, had a certain patriarchy to it and was very interested in protecting itself from its own mistakes," Mazin said.

Ulana will help hold Harris' character Valery Legasov accountable in Chernobyl as she seeks out what caused the accident. So even though no Ulana existed in real life, she represents many women in STEM who had to break through gender-biased barriers in the pursuit of knowledge and truth.

More like this
Why Eurovision 2023's Host City Won’t Be Revealed For A While Yet
By Sam Ramsden and Rachel Mantock
It’s Official: 'The Bachelorette' Is No Longer A Fairy Tale
By Samantha Allen
Dr. Anna Pou Is Still Practicing Medicine After Facing Murder Charges
By Brad Witter
‘Stranger Things’ Stan Megan Thee Stallion Grilled Natalia Dyer About Nancy & Steve
By Brad Witter
Get Even More From Bustle — Sign Up For The Newsletter