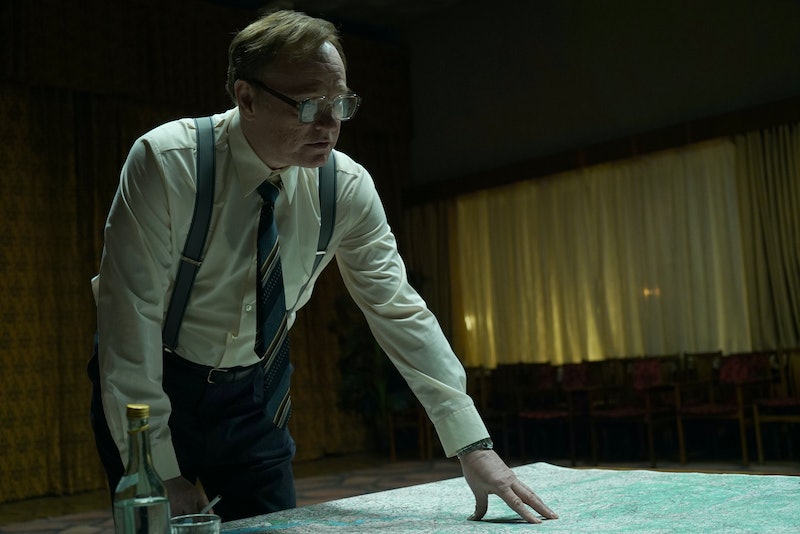 Spoilers ahead for HBO's Chernobyl. A show about the Chernobyl accident is guaranteed to be somber. But the real story of Valery Legasov in Chernobyl, played by Jared Harris, makes it somehow even more tragic. Harris' character is based on the real Legasov, a Soviet Union nuclear physicist who led the commission investigating the disaster. The 1986 nuclear accident occurred at the Chernobyl nuclear power plant in Pripyat, Ukraine, with radioactive emissions threatening the environment and the people in the surrounding areas. The five-part HBO miniseries follows Legasov and others impacted by this catastrophe. And when it premieres on May 6, it starts off by showing the longterm toll Chernobyl had on this particular scientist.

Some of the first minutes of Chernobyl aren't dedicated to the accident in 1986 but instead focus on Legasov's death in 1988. The AP reported that the 51-year-old Legasov had died just two years and one day after the Chernobyl accident. His cause of death was unreleased at the time by the Soviet media, but as was reported a couple of weeks later (and as Chernobyl shows), Legasov committed suicide.

The Los Angeles Times reported, "Soviet scientific sources in Moscow have said Legasov felt he was somehow to blame for the accident that killed 31 people and spewed a cloud of radiation over much of Europe."

Chernobyl will dramatize what Legasov was going through not only years later, but in the direct aftermath of the accident. The AP reported he had been the deputy director of the I.V. Kurchatov Institute of Atomic Energy (now known as the Kurchatov Institute) and a member of the Presidium of the Soviet Academy of Sciences. He helped lead the investigation into the cause of the disaster and while some people in power had tried to cover up what occurred, Legasov was acknowledged for being open and honest about the incident.

The AP obituary noted how in August 1986, Legasov gave a five-hour hearing on the Soviet Union's report on what caused the accident to the International Atomic Energy Agency in Vienna. The report noted how it had been human error that caused this nuclear disaster with the World Nuclear Association reporting that Legasov had written, "Neglect by the scientific management and the designers was everywhere with no attention being paid to the condition of instruments or of equipment."

In a BUILD series interview, Harris discussed how this hearing was actually filmed back in 1986. Only footage of the first and last days of this presentation were made public, but Harris said that the Chernobyl production team was dedicated to recreating those moments accurately.

The miniseries shows some of this real-life footage featuring Legasov and you can also see this scientist in action thanks to this 2008 documentary available on YouTube. According to Nuclear Engineering International, Legasov also kept memoirs about Chernobyl. So while he's no longer alive, there was a lot of information about Legasov for creator Craig Mazin to pull from.

In an interview with the Los Angeles Times about Mazin, Harris said, "What Craig wanted to do was recover some of these names from history that have been forgotten and give them an appropriate place and have their sacrifice be remembered." And with Chernobyl, Legasov's scientific mind, transparency, and integrity will be remembered.