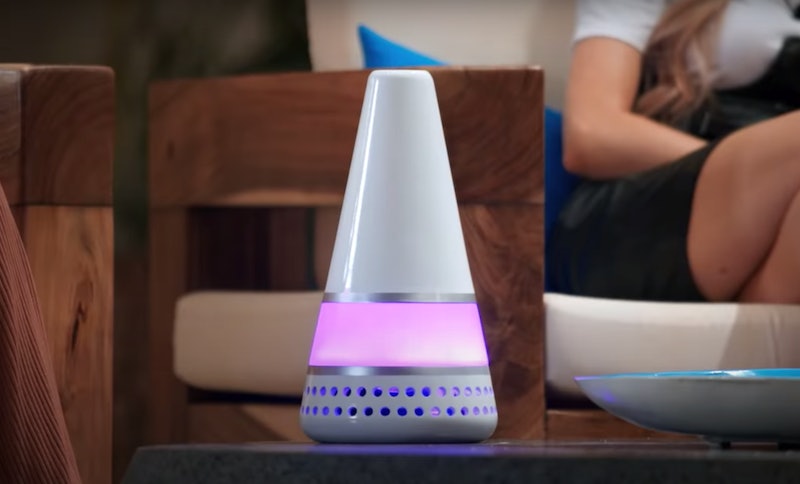 Netflix's Too Hot to Handle feels a lot like Love is Blind mixed with The Circle, all the way down to its Black Mirror-esque premise. In Too Hot to Handle, a bunch of singles must avoid sexual contact to win $100,000, but instead of pods or apartments keeping them apart, the show uses an Alexa-like AI to surveil their every move. Thankfully, Too Hot To Handle's virtual assistant Lana isn't real — but the general anxiety around digital privacy is, and it's that little dash of dystopia that arguably makes these futuristic reality shows so fascinating and addictive.

Lana is a conical white device that glows whenever it speaks, which is clearly meant to reference Amazon's virtual assistant Alexa. Privacy concerns are almost synonymous with Alexa at this point, and Too Hot to Handle plays up this angle by presenting Lana as an all-knowing overlord. "There are conditions to your stay here. No kissing or sex of any kind," Lana says in the Too Hot to Handle trailer. Lana promises them that "this retreat is to help you gain deeper emotional connections," and in order to help them "sexually rehabilitate," as one contestant calls it, money is deducted every time they mess around. "All of you have invested in the process," she reminds them.

Too Hot to Handle tells us that Lana is all-seeing, with no nook or cranny in the house hidden from its eye. In reality, though, the device likely doesn't see anything through that opaque top. Instead, Too Hot to Handle probably uses technology in the same way The Circle does.

In a Vulture interview, The Circle creator Tim Harcourt said that though the voice-activated Circle app is mostly real, it only appears to transcribe accurately in real time. Instead, there's an "absolutely huge control room" of around 20 and 30 producers, who record and watch the contestants constantly. "When you talk to the Circle, there’s a producer who’s transcribing what you say," Harcourt explained. "Instantly, that gets pushed to the next room. So there is some humanity in the app, and that’s a couple of producers whose job it is to take dictation from the players."

It's likely that Lana works in a similar way: that it's not Lana who's watching the singles to ensure there's no sex, but a bunch of producers. Whenever one of the contestants breaks the rules, they'll feed the information to Lana, who then sets off a PDA alarm. In that light, it makes sense why she's almost shaped like a siren; she's not really an independent robot, but rather a fancy tool for several producers.

As for the design, it is possible that Lana can function as a listening device like Alexa does. Even though The Circle's app ended up being supplemented by humans, the app itself was a real thing created by startup Joi Polloi for the show. Though we don't know yet who designed Lana, its cheerful look contrasted with its domineering nature very much feels like Black Mirror's "Nosedive" mixed with "Rachel, Jack and Ashley, Too." It's meant to be creepy, but in a way, is having Lana any worse than knowing dozens of producers (and later, a global audience) are watching a contestant's every move?