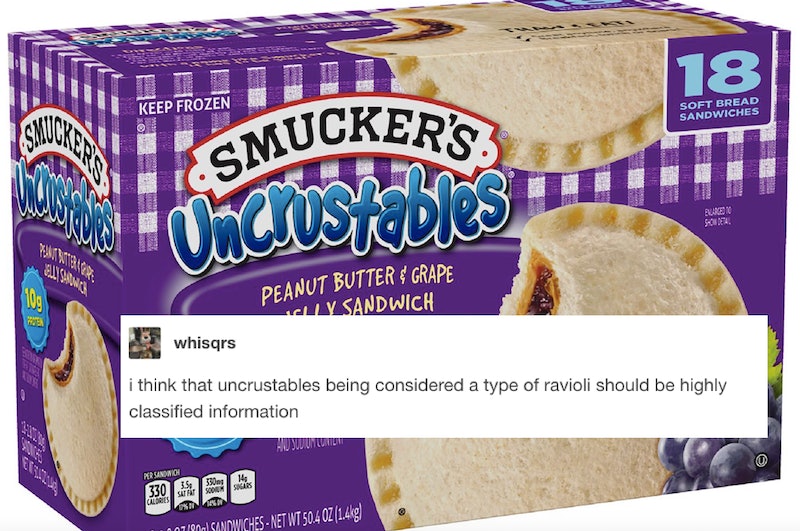 Hey y'all, just popping in here real quick to inform you that there's a relatively high chance that your entire childhood was a lie. You know how humans are supposed to be 60 percent water, but most millennials are 60 percent Uncrustables, goldfish crackers, and Kool-Aid? That 60 percent of your precious self may be under fire now that a debate has launched on Tumblr about whether or not Uncrustables can be classified as ravioli. (Bustle has reached out to Uncrustables about the categorization, and will update upon response; in the meantime, my apologies to Chef Boyardee, because this piece is about to to dig in.)

As reported by BuzzFeed, a Tumblr post by user whisqrs is going viral today with the text, "i think that uncrustables being considered a type of ravioli should be highly classified information". User champagnemanagement quickly followed it up with a reblog including a screenshot from the Uncrustables Wikipedia page as evidence — under the description of the "Sealed crustless sandwich," it says "Type: Ravioli (debated)" (which, in the interest of journalistic transparency, I have to inform you all I am going to start putting on my Tinder bio IMMEDIATELY!!).

BuzzFeed's Cates Holderness managed to get a screenshot verifying this claim before it was altered, but as of press time, the Wikipedia page now lists Uncrustables as "Sandwich (debated)". But that should do nothing to detract from the harrowing nature of this debate, which opened an whole new can of worms — which, incidentally, is one of the few things Uncrustables doesn't qualify as.

See, listed under other possible options for categorization are both pasty and, uh, empanada. (OK, Wikipedia.) In the current description on the Wiki page, it also says, "The sandwich has been loosely categorized as a dumpling because of its crimping, usually in a humorous fashion analogous to a Pop-Tart being classified similarly."

In other words, it's officially time to cross "the internet accidentally making a beloved '90s snack culturally appropriative" off the list of bizarre things that have happened in 2018 (right alongside the fact that I will be joining whichever cult crops up worshipping Chris Evans' new beard from Infinity War on a first-come, first-serve basis).

Meanwhile, on Tumblr, the debate about Uncrustables rages on. The post has now racked up over 74,000 notes, which is approximately 74,000 more than anything I've ever posted on Tumblr, for scale. It seems that it isn't just ravioli people are concerned about — now all of our beloved foods are up for debate.

"cereal is obviously a cold soup," writes another user, in what may have just triggered my second food-related existential crisis of the day.

"what on earth is a uncrustable," said another, who clearly was either not a child of the '90s or spent their childhood eating sandwiches made with their two bare hands like some kind of monster.

Meanwhile, Twitter has already stumbled into ravioli anarchy. At this point, what isn't ravioli? Am I ravioli? Are you?

Perhaps nobody sums this up as succinctly as Tumblr user pancakeke: "THIS IS GETTING VERY SERIOUS."

There you have it, folks. Still a sandwich. We can sleep soundly in our beds tonight.

All of this being said, I still firmly believe that the true answer of what defines an Uncrustable may lie in the opening line of the Wikipedia page, which calls it a "foodstuff". Though to be fair, doesn't the true definition of what an Uncrustable is lie somewhere in our little millennial hearts?