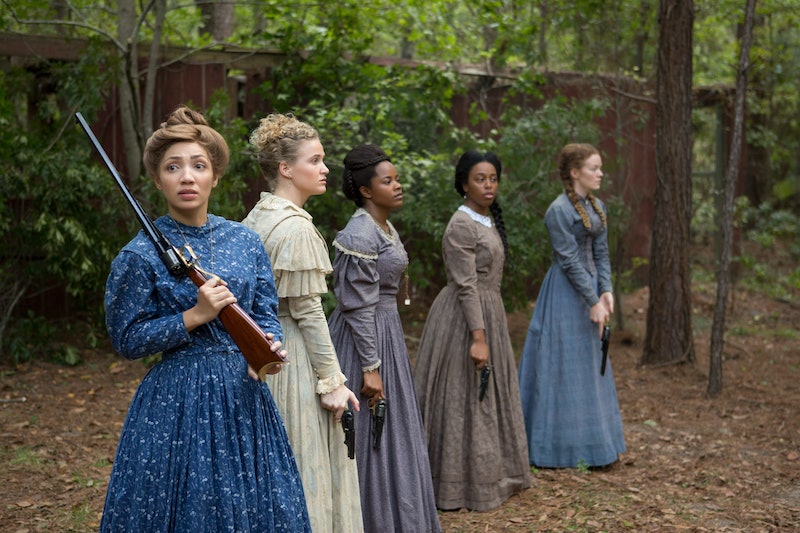 Season 1 concluded with Macon 7’s daring escape attempt and when Underground Season 2 premieres on March 8, there will be a new but very familiar character: Harriet Tubman (Aisha Hinds), who was spotted briefly in the finale. The series is set well over 100 years ago, but its themes remain relevant in 2017. In an interview with Bustle, Underground showrunner Misha Green says the show's overarching message that "if we all work together, we can do good" is applicable to our current political and social climate.

Although the despair over the current state of our country is certainly warranted, Green points out that the characters in Underground were "up against even crazier things than we are. And they fought back, they created change, and they moved the world to a better place. If they could achieve that despite what they were up against, we can do that now — especially if, like these characters, we work together."

Green points to Harriet Tubman as a role model for young activists to look to. "Harriet Tubman ran away and she was free, and then she immediately said 'I have to help others get free,'" she says. "The idea of lifting others up is also very relevant today." Green and her co-creator Joe Pokaski spent a great deal of time researching Tubman before adding her character — and viewers will see a very human side of the woman who often viewed as something of "a mythical historical icon." Green hopes her character will inspire viewers. "We really tried to break it down to understand how we can all be Harriet Tubman," she says.

Aside from the exciting cast additions, Green teases that Season 2 will be "explosive" and filled with "lots of twists and turns." And, we can rest assured that there's a lot more amazing music in store. Green is particularly excited about a new song that John Legend (who plays Frederick Douglass this season) wrote for the Season 2 premiere.

Green looks forward to viewers' responses to Season 2, and she loves communicating with fans on Twitter every Wednesday night. Underground has developed a devoted fanbase in a short period of time, proving that Green and Pokaski were right to trust their instincts when naysayers told them no one would be interested in watching "a history lesson."

Another reason the success of Underground is inspirational is Green herself. As of 2016, women accounted for just 26 percent of TV creators, directors, writers, and producers — so, as a 32-year-old woman of color, Green didn't exactly have the odds stacked in her favor when she set out to pitch Underground.

"Hollywood is such a patriarchal white male society, and I think it’s really hard to navigate it," she says. "It's definitely tough, but it's all about perseverance and finding allies. You have to bring your voice and then find other voices to join in with you."

There's no shortage of stories to tell, but Green says the challenge is finding allies and collaborators that will allow you "adhere to your vision" and tell the story the way you want it to be told. "Being a woman of color, it’s not hard to find stories to tell about us," Green says. "The story of the underground is about a revolution, and I think that women have always been at the forefront of revolution. It was Harriet Tubman and Harriet Beecher Stowe."

Underground's depiction of women's relationships deftly sidesteps common tropes and stereotypes that are often seen on TV. Green says this was never a specific goal she had in mind, but "telling the stories of these characters and their relationships" came naturally to her, especially because women were the true leaders of this movement.

Green advises women in other male-dominated fields to use her previously mentioned tactics of perseverance and forming strong bonds. "Find people who think like you, but will also challenge you," she suggests. "Do a project together. Listen to their opinions and advice, but trust your instincts — in my experience, a lot of times projects fail because you abandon your own vision in favor of what other people have told you to do."

Misha Green is an inspiration to all ambitious women who strive to succeed in ultra-competitive fields because they have an important story to tell. Underground is more relevant to 2017 than we may have expected, so let's take Green's advice and learn to "be Harriet Tubman." In this era of renewed activism, it's empowering to remember that women have historically spearheaded revolutions — and there's a lot we can learn from the revolutionaries who came before us.