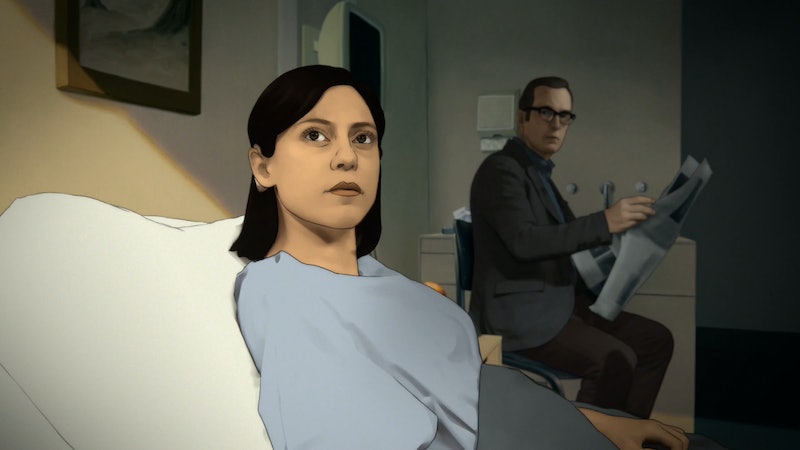 Spoilers ahead for Undone Episodes 1-5. Undone, a new animated show from Amazon about a 28-year-old woman staring down the barrel of her existential ennui, opens with a familiar trope for signaling extreme distress: reckless driving. Our protagonist Alma (Rosa Salazar) careens down the side streets of San Antonio, rivulets of teary mascara painting her cheeks, until someone appears—or, at least, appears to appear—in her peripheral vision. The inevitable car crash raises Undone's central question: Did Alma really see something on the side of the road, or was her vision a manifestation of what she wants to see? Could she be clairvoyant, or is this the onset of some sort of mental illness?

The narrative, it turns out, is non-linear. The show cuts from the accident to a shot of Alma in bed and unharmed. The shift reads menacingly—perhaps she dreams of getting into an accident, something colossal happening to her to interrupt the humdrum of unrelenting, regular life. But the crash is more than just a cheap hook into the series: it’s a prism that lends salience to Alma's narration. “Do you ever feel like you're in a play except you’re the only one who knows it's a play?” Alma asks, more interested in interrogating reality than dealing with it.

“I wake up every morning in the same bed, with the same person. I shower, I brush my teeth. I get dressed, and I eat the same breakfast, and then take the same commute to work...is this all there is?” Alma wonders. But the bed she's talking about looks cozy, the person in it makes her laugh. Her job as a daycare worker may be monotonous, but it’s hardly backbreaking. It’s tempting to dismiss her complaints as frivolous, but the hollowness she describes can also be a sign of depression.

In one early scene, Alma teaches a student about a tribe in Colombia that raises their leaders in a dark cave for the first nine years of life. “When the babies come out...they are are so blown away by how much more amazing the world is than they could have ever imagined that they have such incredible respect for whatever created this place and all of the beautiful creatures living in it.” The world outside the cave is the world Alma lives in, but she can’t see its magic. It’s when she huddles under a blanket to mimic the cave—when she is retreating from the world—that Alma is happier. It’s in the relief that floods her face when Alma, who is deaf, removes her hearing aid to quiet the noise. She craves a break from reality and, in small ways, has begun to seek it out. She’s been drinking a lot lately and despite saying she wants to change that, she’s the one ordering rounds of shots at the bar the night before the crash.

“Do you ever feel like you're in a play except you’re the only one who knows it's a play?” Alma asks, more interested in interrogating reality than dealing with it.

But just when it seems clear that Alma’s distress is transient, spiritual, and sure, fine, yeah, maybe even a little millennial, we learn about her grandmother, whose schizophrenia was severe enough to require lithium and shock therapy. As Alma asks her mother for more information about her grandmother, we’re offered a peek behind her wry cynicism and see a person who’s afraid her current mood is pathological. Maybe even hereditary. Alma breaks up with her boyfriend, she explains to her sister, because “If you know you have a broken brain, why would you put someone else through that?”

It’s the break-up that begets the night of too much Patron that eventually results in the dramatically hungover fight with her sister (on the sidewalk outside church, no less) that lands her behind the wheel on the morning of the crash. But when the episode catches up with itself to show us the car crash again, it also slows down. Instead of an apparitional hand glimpsed from the corner of Alma’s eye, we see the full portrait of her dead father (Bob Odenkirk) looking suspiciously identical to a photo of him Alma only recently saw for the first time. “Dad?” she whispers, on a question or maybe a prayer.

The series works in a key of heightened realism. It’s rotoscoped version of real-life San Antonio (imagine the animation-style of Richard Linklater’s A Scanner Darkly and Waking Life) suspends the characters in some liminal state where they look both impossibly human and not human at all. The animated avatars are based on the live performances of their actors while the backdrops are lifted from original oil paintings, a blend of the ephemeral and the static that doesn’t look like anything else on television. If anything, it resembles a graphic adventure video game (think 2015’s Life is Strange) and throws off the same impression that a video game’s cutscenes do: that what follows is undecided. That whether she’s Dorothy en route to Oz or her own grandmother on the brink of breakdown is a discovery happening as we watch. Is Alma transcending or suffering? At this stage, who could tell the difference?

It’s the tension that interested Bob Odenkirk in doing the show at all. “I didn’t just need work,” he tells me. “I thought it was important. I was eager to see mental illness in a different light. Most people avoid it. I don’t think any group is more invisible than people living with schizophrenia or bipolar disorder.” And he believed series co-creator Kate Purdy, an executive producer on BoJack Horseman, was the right person to take it on. “I’m excited for her.”

“She’s layered the mental illness with a murder mystery and the complications of what if Alma’s actually a visionary. The challenge for Kate Purdy is balancing things out so all of the points of view are dealt with in a straightforward way, to keep us uncertain if Alma’s losing her mind in a tragic way or if she has a gift or power. As long as it’s still a question, it’s going well. She’s got a big challenge.” As Alma's realities shatter and slide, as she puzzles whether her father died or was murdered, as she worries she's living with schizophrenia at the same time she wonders if she can commune with ghosts, the questions themselves feel urgent and, more importantly, answerable — they're not played as just another symptom of mental illness.

One of the most thrilling aspects of Undone is that it’s not exactly hurtling us toward the answer; the series ends not far from where the series begins, refusing to let plot outpace its characters. Over the show’s early episodes, we crawl with Alma as she struggles to grasp what’s happening to her. “Is this all there is?” Alma was so terrified the answer would be “yes”. Now, she’s in a tug-of-war with the enormity of a murky “no, maybe not, not exactly.” If the backdrops of our lives are just oil paintings, Undone’s already scratched past the surface, splitting the canvas to rattle our frames.