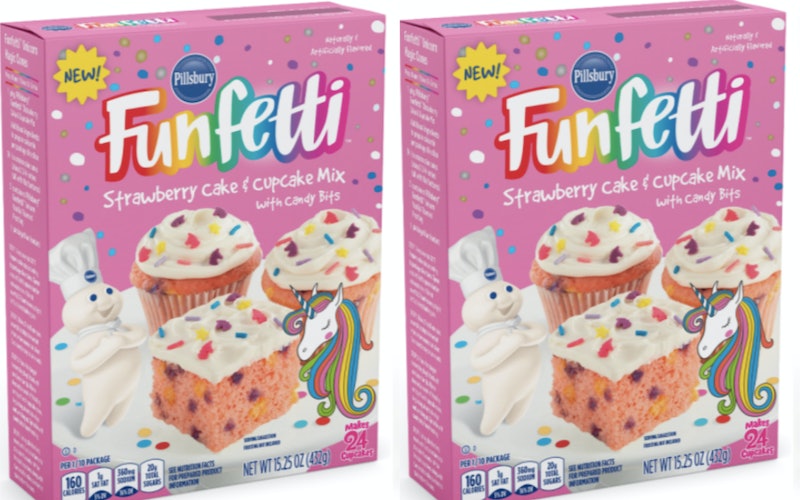 As someone who sees the world through Funfetti glasses and identifies as part-unicorn, I am delighted to inform this internet that soon you'll be able to get Unicorn Funfetti Cake and Frosting mixes on shelves. As one would expect from something with the word "Unicorn" in the name, both the cake mix and the frosting are — be still my aesthetic — a delightful millennial pink, so it's basically Funfetti, but make it Instagram. Not only that, but the sprinkles themselves are shaped like little unicorns. But the best part? Your Funfetti's makeover isn't just in the color — the Unicorn version also tastes like strawberry.

A rep for Pillsbury confirmed to Best Products that you can expect to see this new mix in major retailers nationwide this September, just in time to aggressively inform everyone in your inner circle that the Halloween party this year will, in fact, be Unicorn Funfetti themed, no ifs, ands, or sparkly buts about it. Yes, it is not entirely ~spooky~, but I feel like the Cats trailer already went ahead and put all the spook in our lives that we need for this year. The spook quota is officially filled. Enter: unicorn-themed everything, which maybe, just maybe, will give us all a chance to heal.

As noted by Best Products, this is something of an Event for your beloved Funfetti brand — it's the first time since the dawn of Funfetti in 1989 that a new non-seasonal variety has been released. And, in fact, it's not just the one variety — the company is also releasing a Galaxy Funfetti Mix, in honor of the 50th anniversary of the moon landing. This one features sprinkles with stars and moons, and comes with a frosting that is "Space Blue Vanilla," but otherwise sticks to the tried-and-true flavor of the OG Funfetti you know and love.

So many Funfetti options, so little oven space!!

Whether you choose to celebrate your love of Funfetti with the intergalactic or mythical versions on shelves, you know at the very least that it will be both delicious for your eyes and prime content for all your adorable Instagram Stories (if you manage to take photos before eating all the batter raw, like some people who happen to be writing this article are prone to doing).

Plus, if you're in the dessert making mood, Pillsbury has been plenty busy dreaming up delicious options for you. Just two months ago, Pillsbury's Place & Bake Brownies were released, giving you the option to pop individual-sized, pre-cut brownies into the oven as easily as you do with cookie dough. Those hit shelves in Marshmallow, Peanut Butter Chip, and Chocolate Fudge, all of which sound like they would perfectly complement a Funfetti cake (hint, anyone planning to come to my apartment). Pillsbury also released a Marshmallow Cookie Dough in February and Filled Crescents in Cherry and Apple in July, so basically, if there's a specific dessert mood you're in, your trusty Dough Boy is there to fulfill it. In the meantime, catch me running up and down the bakery aisle ready to stock up on as much pink Funfetti mix as my wannabe unicorn hands can hold.