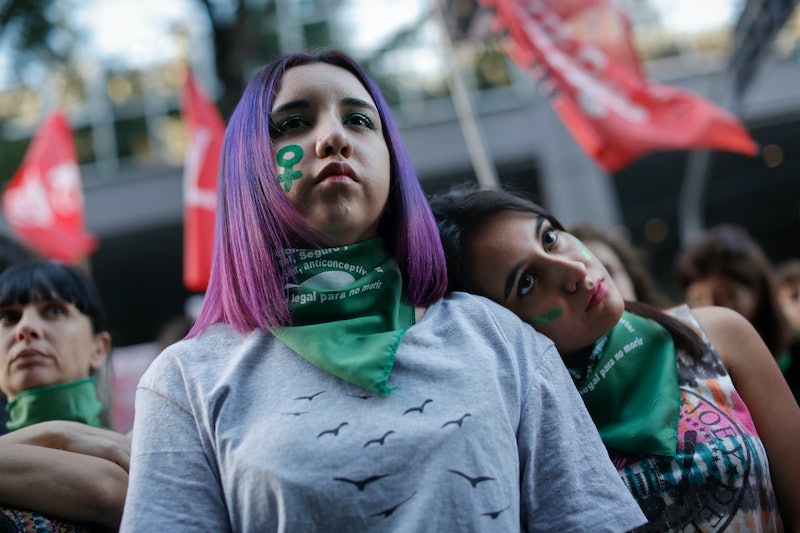 Women are dying every year in Latin America because those in power treat abortion as a moral, religious issue rather than what it is: a health crisis. There is nothing moral about letting women die year after year. Decriminalizing abortion in Latin America is an immediate emergency — you cannot forbid abortion, you can only force women to die trying.

Elizabeth was only 24 years old when she died from septic shock and inflammation in her uterus after attempting to terminate a pregnancy with parsley. The mother of two was rushed to the hospital in Buenos Aires. Her uterus was removed, but the attempt to save her life failed.

Her death comes, heartbreakingly, less than a week after the Argentine Senate rejected a bill to legalize abortion up to 14 weeks. If the bill had passed, it would have saved Elizabeth’s life. Instead, she is another woman who will become a statistic when activists beg Latin American elected politicians for legal, safe, and free abortion.

Elizabeth will become another name repeated in vigils, honored by women who could have easily been in her position, who still do not fully possess control over their own bodies. The religious zealots that dominate leadership in Latin America preach that they are “pro-life,” but Elizabeth will become another dead woman elected officials will forget when the dust settles.

Latin America has some of the most restrictive abortion laws in the world. According to the the International Health Policies Network, only four countries allow assisted abortion in all cases, in six countries it’s not allowed at all, and in the 23 remaining countries, abortion is only allowed under specific circumstances, such as rape, danger to the mother’s life, or grave fetal anomaly.

Yet, an estimated 6.5 million abortions are performed every year in the area, with 95 percent of them in unsafe conditions, the IHP Network reports. The result of this is that every year, about 760,000 women in Latin America are treated for complications from unsafe abortions. In Argentina, 18 percent of maternal deaths are due to abortion complications, a researcher at the Center for the Study of the State and Society told The New York Times. In Brazil, a woman dies every two days from illegal abortion complications.

This is also a crisis that is about class and race; as the old Latin American feminist protest chant goes, rich women pay to get safe abortions, working class women die trying to get them. According to studies by the United Nations, race continues to be the most persistent predictor of poverty in Latin America, meaning that most working class women in Latin America are either black or indigenous. Rich white women pay private doctors for the service illegally (a practice that is safer but not always reliable), while working class women of color are forced to use hangers or buy unregulated pills and herbs that put their lives at risk.

In some places in the region, the women who survive abortion complications might go to jail. A 2010 study on illegal abortions in Rio de Janeiro, Brazil, concluded that working class women are much more likely to be criminalized because cheaper methods of abortion are more likely to result in complications. In El Salvador, poor women who suffer miscarriages are often charged with homicide.

Marginalized women, who struggle to make a living, are either dying or being incarcerated for attempting to practice body autonomy. This should be treated as the health crisis that it is. Unsafe abortion is killing women every year, and as with other epidemics that killed thousands of people, the solution should be made freely available.

Elizabeth’s death, and that of thousands of Latin American women every year, is proof that the “pro-life” movement is on the wrong side of history. This is not about religion, and it’s not about the debate of when life starts and what morality is attached to it. It’s time to recognize that decriminalizing abortion and saving women’s lives in Latin America is an urgent emergency.