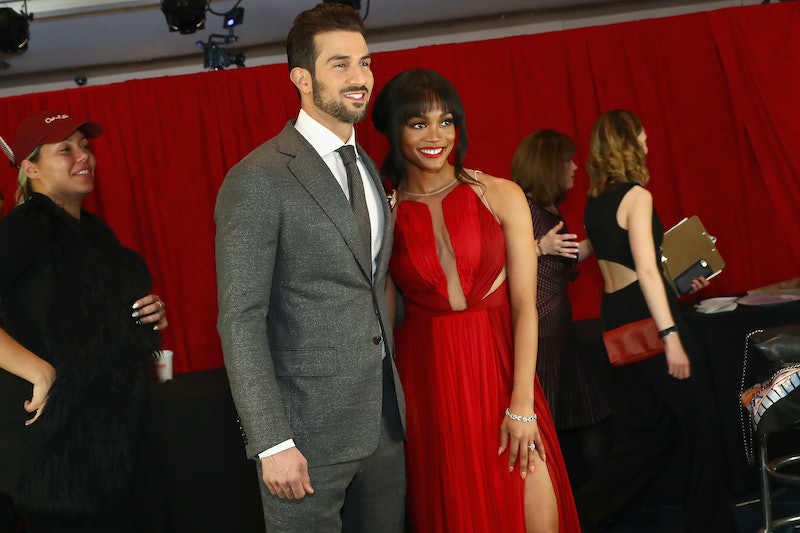 While some hope to get a "Save The Date" announcement from their siblings or best friends, a ton of America — more accurately, all of Bachelor Nation— is waiting for the announcement of when Rachel Lindsay and fiancé Bryan Abasolo will tie the knot. While we don't know when that will be, we do know that it's actually possible that Bachelorette alum Rachel and Bryan may have two weddings.

"We're still just trying to figure out if we're gonna have a televised wedding or more personal," says Rachel, speaking at the Go Red For Women Red Dress Collection Fashion Show on Feb. 8 in New York. "Maybe we'll do both! Why not! We've had a bunch of engagement parties. Why not have two weddings?"

As fans recall, Rachel and Bryan fell in love on The Bachelorette in 2017, and it was a wild ride. Rachel had been second-runner up on Nick Viall's season of The Bachelor beforehand, and when leading her own show, it seemed that she was torn between Peter Kraus or Bryan. Yet she chose one man, and now they're set to be married — although she tells me at the event that the duo have "no updates" on the details.

Despite the lack of info, Rachel does say that she and Bryan are settling in just fine. "We did just move into an apartment together in Dallas," she says. "We're gonna be in Dallas for a bit." As shown by the way they walked the red carpet together at the fashion show and stayed by each other's sides for much of the night, it's clear that the duo are giving every other Bachelor couple a run for their money with how sweet they are together.

And perhaps they'll decide not only to televise their wedding, but to do multiple events, like Rachel says. When talking to Extra, Bryan added his two cents on whether his wedding might be coming to a screen near you. “We would definitely be open to a televised wedding," he said. "We, right now, we enjoy showing everybody how in love we are... and I think that would be the culmination of our love story, or the beginning of it. I think we would definitely enjoy doing it on national television.”

Two weddings would definitely be Bachelor Nation's dream. Double the dresses, double the cute pics of Rachel and Bryan, and double the amount of love. After Rachel recently revealed to Us Weekly that she feels her breakup with Peter dominated the Bachelorette finale, she and Bryan deserve all the attention and happiness they can get.

“I wish you were able to really see more of Bryan," Rachel told Us Weekly about that season. “I’ve never been engaged before and neither has Bryan, and I felt like we were more on the defense about our relationship and having to explain more of it than rather it just showing … So I just wish you really got to see Bryan, and I hate that it took away from him.” She also said the engagement was one of the best moments of her life, though, so hopefully that overshadowed any complaints.

It seems likely that's the case. Rachel and Bryan are constantly on each other's social media feeds, with so much admiration in their posts about the other. And at the Go Red For Women fashion show, all eyes were on Rachel, especially Bryan's. It was definitely her night, as she modeled, but her fiance made a quick appearance when he got up as she started to walk down the runway and gave her a red rose. Oh, how the tables have turned.