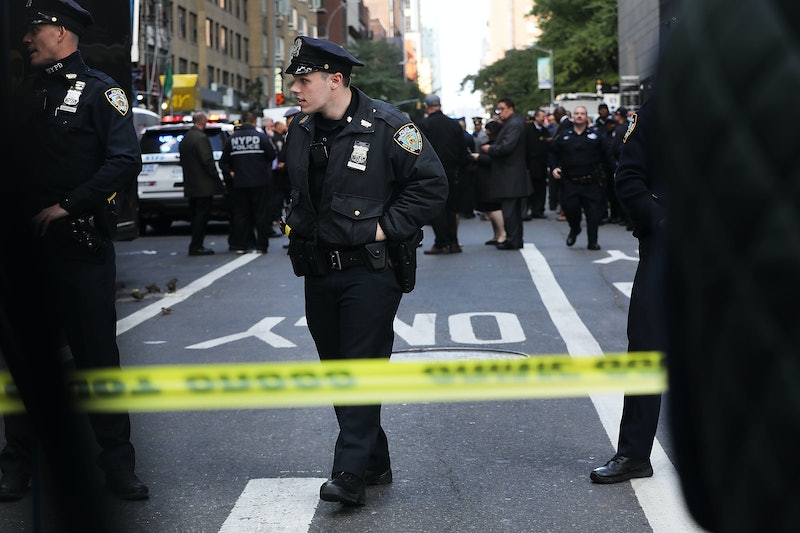 On Thursday evening, after a threat forced the entire Time Warner Center to evacuate, updates to the CNN bomb threat reveal everyone has safely exited the building. Now, the NYPD has confirmed it's doing a "sweep-and-search" of the building to confirm the threat was unsubstantiated.

Earlier in the evening, The NYPD tweeted,

Around 10:35pm, a bomb threat was called into the Time Warner Center [and] the building was evacuated. The threat has not been substantiated at this time; we’re on scene performing a comprehensive sweep-and-search of the facility. We’ll share more info as it becomes available.

Shortly thereafter, the NYPD corrected that original tweet to confirm that police were called in at 10:07 p.m., not 10:35 p.m.

Soon after the evacuation, several CNN hosts like Don Lemon and Brian Stelter took to Twitter to keep people up-to-date on the latest happenings. Lemon tweeted at 10:52 p.m., "We were evacuated in the middle of my live show. Bomb threat. We’re running taped programming. NYPD is investigating. Stay tuned."

Anchor Christopher Cuomo tweeted, "Everyone evac’d and is reported fine. Have to put safety first. Thanks for all the well-wishing, but even more so for not making stupid jokes empowering such a threat. People will re-enter ASAP. Onward."

By midnight, the NYPD tweeted an all-clear for the area. By 12:15 a.m., Lemon was back on air, sharing info about a caller who allegedly claimed there were five explosive devices in the building. Again, that information was unsubstantiated, and the NYPD called an all-clear.

Earlier in the evening, Lemon explained how the threat was communicated to the staff of CNN. "We were told to evacuate the building and to do it as soon as possible. We grabbed what we could and got out of the building and now, we are standing outside of the building," he said. "All of the employees, all the people who were in the building as we were doing our live broadcast are out of the Time Warner Center now."

Following the scare, Stelter took to Twitter to acknowledge the situation in a lighter tone. He wrote, "So, tonight's newsletter is going to be late. More of a morning edition..."

Notably, because CNN's live broadcasting was postponed due to the scare, Lemon and Stelter were live on the air past midnight, and therefore able to break the news of Kevin Hart's announcement that he was bowing out of the Oscar Host position.

Unfortunately, this is not the first time CNN has dealt with a situation like this one. Two months ago, CNN was evacuated after a pipe bomb was intercepted in the mail room, as one of several mailed pipe bombs allegedly from the same suspect, who is now in federal custody.

Following the chaos of the evening, Shimon Prokupecz, a crime and justice reporter for CNN, praised how the CNN team responded. "This was surreal tonight," he wrote via Instagram. "Just want to say what an incredible team I work with. We managed to get on air despite the evacuation. What a team effort. The producers who came from home and stepped in. The photojournalists who came from home and hotel rooms to hold iPhones so we can get on. Thank you!"