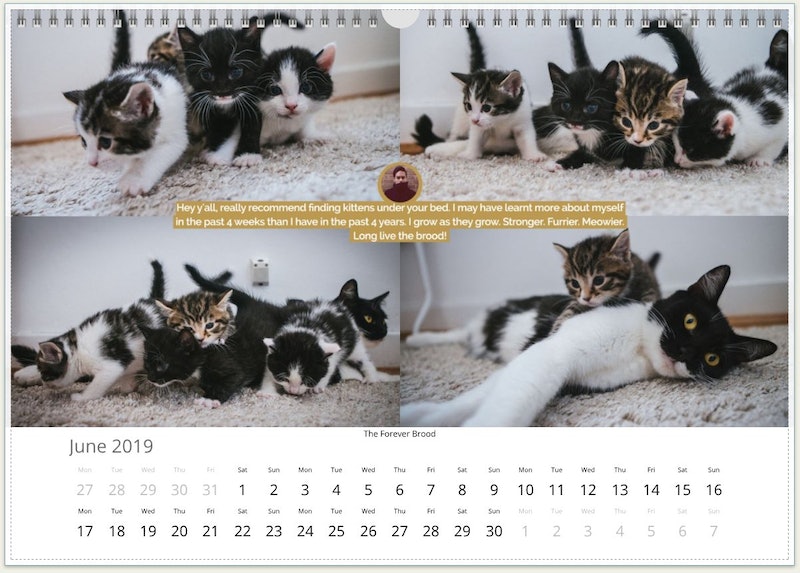 Without a doubt, the purest thing to happen both on and off the internet in 2018 has been the Twitter Cat Dad story: The ongoing saga of Paris Zarcilla and the family of newborn cats he found under his bed in the spring. Although it’s been months since the initial Twitter thread Zarcilla began about the whole thing went viral, updates about Cat Dad have been arriving in a steady stream — and now, we’ve got the best one of all: Zarcilla has made two Cat Dad calendars featuring his gorgeous photographs of the beautiful feline family, and you can by them right now. Zarcilla has named the online shop he’s opened Accidental Cat Dad and, uh… well, let’s just say that I just found my 2019 calendar.

In case you need a refresher, the whole story began on May 30 when Zarcilla, a filmmaker based in London, went upstairs to get a sweater and found that a cat had somehow found her way into his home and given birth to a whole bunch of kittens in the space underneath his bed. He live-tweeted everything that happened that day — but it turned out to be more than just a one-day event; he’s continued to update us on everything that’s happened in all the days since, too. From a set of Dungeons and Dragons-style character profiles he created for the kittens soon after they were born (each corresponds to a Game of Thrones/Song of Ice and Fire character) to today’s news, a lot has happened in the five and a half months since what Zarcilla now calls the Forever Brood arrived. (The mother cat’s name is now Forever; hence, the Forever Brood.)

Here’s what’s been going on.

June consisted largely of updates on the kittens’ growth:

And updates on the mother cat:

As well as news about Zarcilla’s search for the mother’s human. Soon, though, it began to look as if she didn’t actually have a human — or at least, one that wasn’t Zarcilla himself. Although he did receive some responses to his lost-and-found flyers, none of them turned out to be a match. The last remaining check was to scan the mother for a chip, so on July 2 — when the kittens were old enough to be briefly without their mother — Zarcilla took her to the vet.

And, lo and behold:

A few days later, he started a GoFundMe and Amazon wish list at the behest of folks all over the internet who wanted to donate to his little furry family:

And WOW, did those folks deliver:

“I sit here among boxes on boxes of food, equipment, books, and all things cat related and find myself in a state of awe at the generosity and kindness of strangers,” he wrote in a thank you message he tweeted out shortly after all those packages arrived. “I’ve never been on the receiving end of so much positivity on social media but it is unique moments like this that reinvigorate my belief in humanity, which of course is strange because all of this is for cats.” Indeed, the response was so great, Zarcilla actually closed the GoFundMe campaign; he and the brood had received so much that there was no need to keep it open. “You’ve all been so beautifully generous and I’m inspired to be the best version of me to give these future homewreckers the best life they can have,” he wrote. “I’m afraid I don’t have a wide enough vocabulary to fully express my gratitude. So here, laid bare is my deep and sincere thanks. Truly.”

He concluded, “What a weird and wondrous journey this has been and may it long continue.”

And so it has. Over the next few months, Zarcilla continued to update us all on the continuing adventures of the Forever Brood, including snapshots of daily life:

And the life lessons he’s learned from them:

And on Oct. 3, the entire brood was chipped, vaccinated, and neutered:

Excuse me while I melt.

A few weeks ago, Zarcilla started posting updated profiles for each of the cats, introducing them by their official names and making, er, adjustments to some of the assumptions he’d initially made about them when he first found them that later turned out to be off the mark:

Zarcilla’s background as a filmmaker and artist has been readily apparent in all of his posts about the Forever Brood, but in case there were any remaining questions about his skills, these new profiles drove home the full extent of the matter: His photographs are beautiful. Which, in turn, led to a query:

You can guess what happened, right?

And, bless him, Zarcilla really delivered. Today, he announced that the Accidental Cat Dad store was open for business.

Two calendars are available for purchase: The Best Of Cat Dad Twitter Calendar and the Forever Brood Unseen Calendar. The Best Of Cat Dad Twitter Calendar is pretty much what it sounds like; for each of the 12 months of 2019, a selection of the photographs Zarcilla has posted — 52 overall — have been paired with some of his most notable tweets about the cats, making a feel-good highlights reel of the story’s best moments. The Forever Brood Unseen Calendar, meanwhile, features all-new photographs of the cats that haven’t been released publicly before. Both are A4 landscape sized and spiral-bound; the Best Of calendar runs £13.00, or about $16.50, while the Forever Brood Unseen calendar is £9.00, or about $11.50.

Oh, and! 20 percent of all the profits from both calendars will go to the mental health charity Mind, to the feline welfare organization Cats Protection, and to the Celia Hammond Animal Trust. So, not only are the calendars gorgeous and adorable — they also benefit some excellent causes.

If you want to order them as Christmas gifts, you’ve got until 10 a.m. GMT on Monday, Nov. 19 to place your order; Zarcilla’s printer told him that orders received by this time should result in a turnaround time for printing that will allow him to mail them out worldwide in time for Christmas delivery.

Check out the Accidental Cat Dad shop here. You can also keep up with the ongoing Cat Dad saga at Zarcilla’s Twitter page; the thread begins here.

I'M NOT CRYING. YOU'RE CRYING.