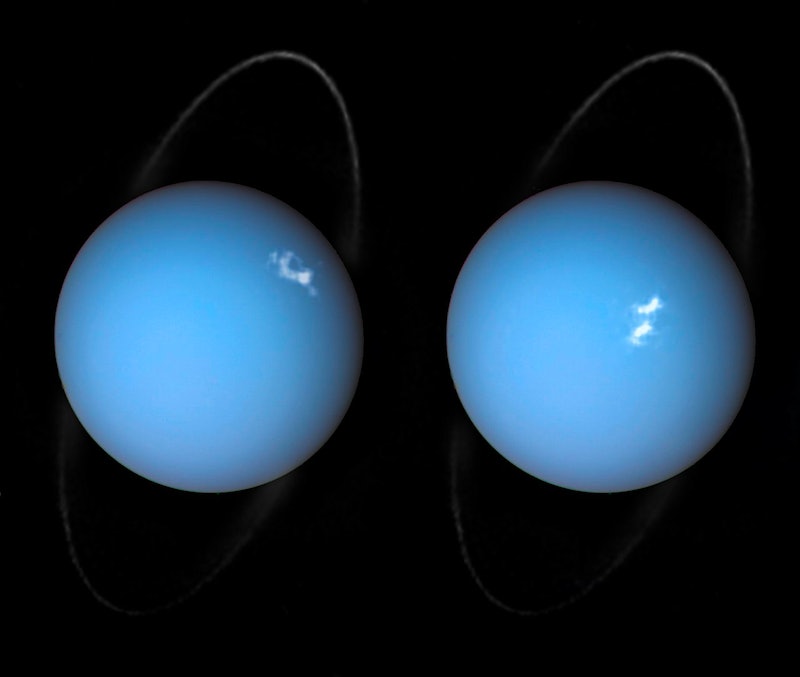 There's really no delicate or clever way to put this, so here: Uranus literally smells like farts. Yes, really. Turns out all those butt jokes your third-grade science class thrived on had already been beaten by the Universe. Y'all didn't even stand a chance, because according to a recent study published in the journal Nature Astronomy, the cloud top on Uranus is made up primarily of hydrogen sulfide, "the gas that is principally responsible for the foul smell of rotten eggs and, yes, human flatulence," TIME reported.

TIME added that Uranus and Nepture have only gotten a flyby from Voyager 2, and according to a press release about the study published by the Gemini Observatory, "[e]ven after decades of observations" thanks to Voyager 2, "Uranus held on to one critical secret, the composition of its clouds." Researchers on this study used infrared light from Uranus captured by the Gemini North telescope to confirm the presence of hydrogren sulfide, which "has been long debated, but never definitively proven," according to the press release.

Patrick Irwin, a professor of planetary physics and one of the researchers on the study, said in the press release that detecting hydrogen sulfide on Uranus is difficult because the spectroscopic absorption lines ("where the gas absorbs some of the infrared light from reflected sunlight") "are especially weak and challenging."

Irwin explained thought the spectroscopic lines he and fellow researchers Glenn Orton and Leigh Fletcher were looking for would be "at the edge of detection," but decided to "have a crack at looking" anyway. Irwin explained that "thanks to the sensitivity of [the Near-Infrared Integral Field Spectrometer (NIFS)] on Gemini, combined with the exquisite conditions on Maunakea," the team was able to detect the lines "unambiguously."

Chris Davis of the National Science Foundation said in the press release, "This work is a strikingly innovative use of an instrument originally designed to study the explosive environments around huge black holes at the centers of distant galaxies. To use NIFS to solve a longstanding mystery in our own Solar System is a powerful extension of its use."

No one can blame folks for taking this opportunity to make every joke possible, but don't dismiss this discovery as just good for a laugh, because it has some pretty significant scientific merit. According to the press release from the Gemini Observatory, the presence of hydrogen sulfide on Uranus "contrasts sharply with the inner gas giant planets, Jupiter and Saturn, where no hydrogen sulfide is seen above the clouds, but instead ammonia is observed."

Figuring out more about just why Uranus has been, er, gifted with the presence of this particular gas will help us "shed light on questions about the planets' formation and history."

Fletcher, a senior research fellow in planetary science, explained in the press release that the differences between the four gas giants "were likely imprinted way back during the birth of these worlds," and that, "[d]uring our Solar System’s formation the balance between nitrogen and sulphur [...] was determined by the temperature and location of planet’s formation.” Translation: Mother Nature has been sitting on this punchline for billions of years.

Knowing more about Uranus's composition could also help prove that planets in our solar system shuffled around during the formation of the system. "[C]onfirming this composition information is invaluable in understanding Uranus' birthplace, evolution and refining models of planetary migrations," the press release reported.

Bottom (I'm sorry. I'm so sorry.) line: "If an unfortunate human were ever to descend through Uranus’s clouds, they would be met with very unpleasant and odiferous conditions," according to Irwin. But the fact that Uranus smells like farts may be the key to unlocking the secrets of planet formation, including the formation of our very own Earth, and therefore the formation of humanity itself.

Mother Nature will be here all week.