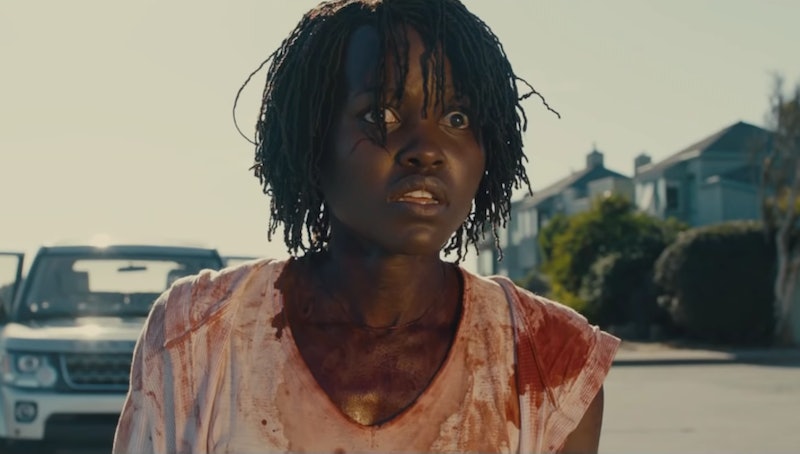 Jordan Peele's Us broke all sorts of records after it hit movie theaters on March 22. But the most meaningful of these milestones is that Us broke a box office record for movies starring black women. Lupita Nyong'o's first-ever headlining role (take a moment to wrap your head around that) earned more than $71 million in the U.S. during its opening weekend. As Shadow and Act highlighted, that's more than any other film led by a black woman in box office history by tens of millions of dollars. So Jordan Peele's Us is not only significant for Nyong'o's already-stellar career, but it also made cinematic history for women of color — and it hasn't even been out for a whole week.

As Forbes outlined, the $71.2 million haul from Us during its opening weekend earned the doppelgänger horror film a slew of top spots when it comes to box office records. Like being the second-biggest opening weekend for a live-action original movie behind only Avatar. Peele's sophomore project also earned about $38 million more than his first film Get Out (which, of course, contributed to the popularity) and is the second biggest opening weekend of 2019 after Captain Marvel. And while Brie Larson in Captain Marvel made her mark for women at the box office, Us has crushed the numbers specifically for women of color.

After Us, the next most successful opening weekend that a movie led by a black woman was 2004's Alien v. Predator starring Sanaa Lathan, which earned $38 million it's opening weekend. Oprah Winfrey and Regina Hall are in the number three and four stops, respectively, for their 2018 films A Wrinkle in Time and Girls Trip, which both earned more than $30 million, per Box Office Mojo. Rounding out the top five opening weekends for films led by black women is 2010's Why Did I Get Married Too? starring Janet Jackson at $29 million.

Since winning the Best Supporting Actress Oscar for 12 Years a Slave, Nyong'o has been in major films like Star Wars: The Force Awakens and The Last Jedi, the live-action remake of The Jungle Book, and Black Panther. The Star Wars films and Black Panther are in the top six most lucrative opening weekends ever, so it's not like she's a stranger to being in blockbusters. But besides the forthcoming Little Monsters, Us is the first time that Nyong'o hasreceived top billing. And based on reactions to her performance in Us as both Adelaide and Red, the fact that it's taken six years since her breakout performance to get that star title is the real horror.

At a special screening of Us at Howard University on March 20, Nyong'o shared her appreciation for writer, producer, and director Peele for providing her with such a substantial role. "The stars aligned for my first lead role to be with Jordan Peele," she said, according to the school's official website. "He gave me two well-rounded, three-dimensional women to sink my teeth into."

Peele also recognizes the importance of representation in his films. During an event at East Hollywood's Upright Citizens Brigade Theatre on March 25, Peele said that he probably won't create a movie with a white male as the lead. He noted that he's "seen that movie," per The Hollywood Reporter. "The way I look at it, I get to cast black people in my movies. I feel fortunate to be in this position where I can say to Universal, 'I want to make a $20 million horror movie with a black family.' And they say yes," Peele said.

So as his track record becomes only more impressive, audiences can expect Peele to create more opportunities for people of color to star in critically-acclaimed and financially-successful films. And while the world already knew that Nyong'o was a star, the opening weekend box office success of Us only further proves what she — and other talented black female actors — can bring to the table.

More like this
Zendaya Shares Intimate Photo With Tom Holland To Wish Him A Happy Birthday
By Bustle Editors
How To Stream 'Thor: Love And Thunder'
By Arya Roshanian
The First 'Percy Jackson & The Olympians' Teaser Comes With An Ominous Warning
By Grace Wehniainen
The 'Andor' Timeline, Explained
By Gretchen Smail
Get Even More From Bustle — Sign Up For The Newsletter