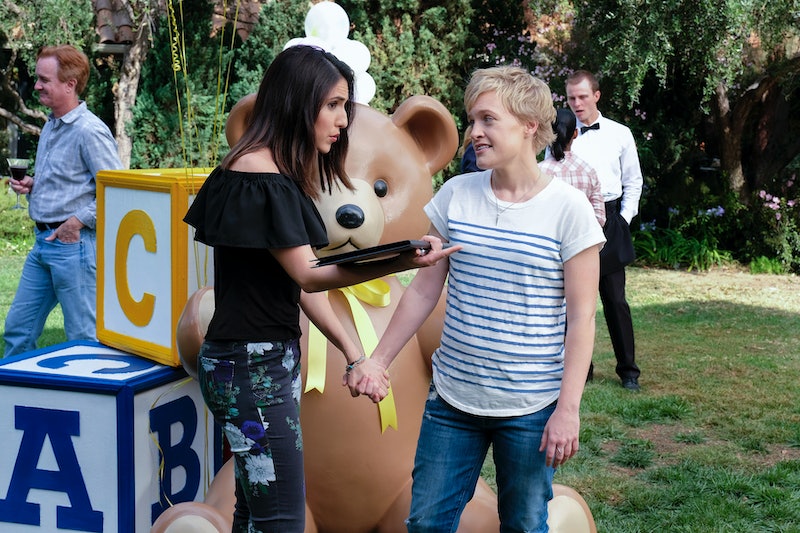 A lot can can happen over the course of eight months... especially when that eight month time period happens over the course of only three seconds on the consistently groundbreaking series Crazy Ex-Girlfriend. The CW's musical dramedy took a big leap in this week's episode "Nathaniel and I Are Just Friends!," by taking a time jump in the middle of the episode in a surprise twist, showcasing just how much everyone's lives had changed in West Covina — including Crazy Ex enigma Valencia, who's now got a girlfriend.

In the jump, everyone except for Rebecca Bunch (Rachel Bloom) has got a new lease on life. Heather (Vella Lovell) trades in her initial excitement for being a surrogate for Daryl (Pete Gardner) for absolute disdain and regret for volunteering for nine months of pregnancy; White Josh (David Hull) comes home from his extended Habitat for Humanity trip with new facial hair and new dog named Max/Dog Josh; and the office politics at Plimpton, Whitefeather & Bunch take a rough turn as Paula (Donna Lynne Champlin) realizes her "Office Bitch" mug wasn't actually ironic. Everyone moves forward in some way in their lives. But after eight months of intensive therapy, where Rebecca made great strides in recognizing when her Borderline Personality Disorder would cause her to lash out, she is still sleeping with Nathaniel (Scott Michael Foster) in secret, despite knowing that he has a serious girlfriend.

But while that heartbreaking end to the episode centered on Rebecca and Nathaniel's romantic fate, with the majority of the episode focusing on their will-they-won't-they, sex-in-the-office-supply-closet story, it was actually only three short Rebecca-less scenes that were the most important of the hour. Before the time jump, Valencia (Gabrielle Ruiz) met with a potential new client Beth (Emma Willmann) for her party planning business. And after the time jump, it was revealed with little-to-no fanfare that during that eight months, their working relationship blossomed into a full-fledged romantic relationship. This is huge for Valencia, who had only been in one serious relationship in her entire life, and it was with a man. But the way that Crazy Ex-Girlfriend presented this huge life change for Valencia was so revolutionary because the new relationship was treated as if it wasn't revolutionary at all.

In the first scene between Valencia and Beth, their chemistry is undeniable when they meet at Home Base. Beth actually laughs at Valencia's jokes, which is something that's never happened to Valencia before. So while it was a shock at first to learn that Valencia was now in a relationship with a woman, it actually makes sense that eight months later at Daryl's baby shower, Valencia and Beth are happily in love and expanding Valencia's party planning business together as partners.

Ruiz learned about Valencia's new relationship when executive producer Aline Brosh-McKenna pulled her aside on set to tell her about Beth. "She wanted my permission to make sure I felt excited like she was excited for this new idea of Valencia falling in love with a woman," Ruiz says. "My first gut reaction was, 'Oh my gosh Valencia found someone. She found someone that loves her.' It wasn't, 'Oh my gosh Valencia is going to be in love with a woman.'"

Something that McKenna said in that conversation really resonated with Ruiz, because she could personally understand how Valencia fell in love with Beth in the perfect way.

"The biggest thing that impacted me was when Aline said the reason she falls in love with Beth is because Beth laughs at her and she thinks Valencia is funny," Ruiz says. "I relate to that because I feel like my husband is the only one who thinks that I'm funny. We met on Match and I sent him a message and he laughed at my message to him. To this day, he makes me feel like I hung the moon or a million dollars every time that he laughs at my silly jokes."

Knowing that former mean girl Valencia is hardly the funniest character on the series — "She's usually the straight shooter and sets up the jokes for everyone else, so she's never seen as funny," Ruiz says — the fact that Valencia found someone that she could make laugh is huge. And McKenna knew that she wanted to introduce this new relationship for Valencia because of the mature, self-aware person she's become post-Josh.

"Valencia has not been pursuing a love relationship because she's trying to get her work life in order. And if Rebecca had never come along, she and Josh probably would have gotten married," McKenna says. "She would have been that suburban wife, and now she's been freed to live her life however she wants. She needs someone who respects her, understands her ambition and sees her. She hadn't found that with any of the men in town."

And so, enter Beth. "Then she meets this woman and you can see from their very first conversation that Beth thinks she's funny, she sees humor in Valencia that Valencia always wishes she had," McKenna says. "And it's someone who takes her very seriously in business and that's extremely important. This is the person that she feels this comfortable connection with and it just happens to be a woman."

When the show's creators were first breaking Valencia's story for the next few episodes, McKenna and Bloom knew that they wanted Valencia to find someone she could fall in love with. McKenna was inspired by many of her friends who found themselves in love with a woman for the first time later in life, or her gay friends whose girlfriends had never been in a relationship with a woman before.

"As we started to think about that person, we were like, 'Why wouldn't it be a woman?'" McKenna says. "It's different from Daryl's story because Daryl discovering his bisexuality was a big part of his identity. For Valencia, the stakes of her having a lesbian relationship, which makes her bisexual, is more about the personal investment in this specific person. She's a Bethsexual. So it doesn't come up as an issue of self-proclaimed identity as it does for Daryl, because Valencia really knows who she is."

Considering that the LGBTQ community is so underrepresented in pop culture and in the media, CXGF's inclusion of two bisexual characters is significant. And while the showrunners know that labels are important (especially for the bisexual community), they explain that for Valencia, this is more about "focusing on her happiness" for the first time.

"That's huge for her," Ruiz says. "When it comes to identifying, she still hasn't necessarily made it a big deal. It's important for me to know for Valencia who she is. When it comes to labeling, what I do know for Valencia is that being able to label herself is something she's definitely not focused on. She loves hard, whether it be men or women, and discovering what that is is definitely on the table."

That's why Valencia's journey of discovering her bisexuality is so different from Daryl's. "Labels are super important in certain contexts," McKenna says. "Daryl saying that he was bisexual and naming it was very important for the show and also for Daryl in his quest to find his authentic self. We're very aware of the tendency to erase bisexuality as a term, the tendency towards bi-erasure. It's very important to us that we not do that."

But the showrunner argues that "in this case, for Valencia it's this specific relationship that she's in."

"If Daryl were to talk to her about it, she'd say, 'Yeah, I'm bisexual, obviously. I'm in a relationship with a woman now,'" McKenna adds. "You'll see going forward, Valencia is in a voyage of her own self-discovery of her place in the world and Beth is a big part of that. Identity means a slightly different thing for her than it means for Daryl."

So does that mean Crazy Ex-Girlfriend isn't going to have Valencia reprise Daryl's instantly iconic song "Gettin' Bi?" Unfortunately not, but Ruiz admits with a big laugh that "that would be amazing."

"Daryl's journey of discovering he's bisexual is so different from Valencia's because she doesn't question her choices," Ruiz says. "She's confident and committed. She inspires me in real life because she's so sure of who she is. She makes me feel powerful."

Crazy Ex-Girlfriend isn't using Valencia's bisexuality to make headlines or shock. Instead, the series is using it to explore who Valencia is a woman.

"She's so happy and comfortable with Beth, and they're in business together too, which I love," Ruiz says. "You get to know Valencia's inner workings because of Beth. We're focusing on Valencia's own sense of self and her opinions on who she is and finding herself as a woman in a small town world and a powerful businesswoman. Beth really shines and calls Valencia out in a way where she's the first person who Valencia really listens to to change."

And knowing Crazy Ex-Girlfriend's track record with portraying incredibly delicate stories with the appropriate poise, it's safe to say that this is only the beginning of a beautiful chapter in Valencia's (and the show's) life.