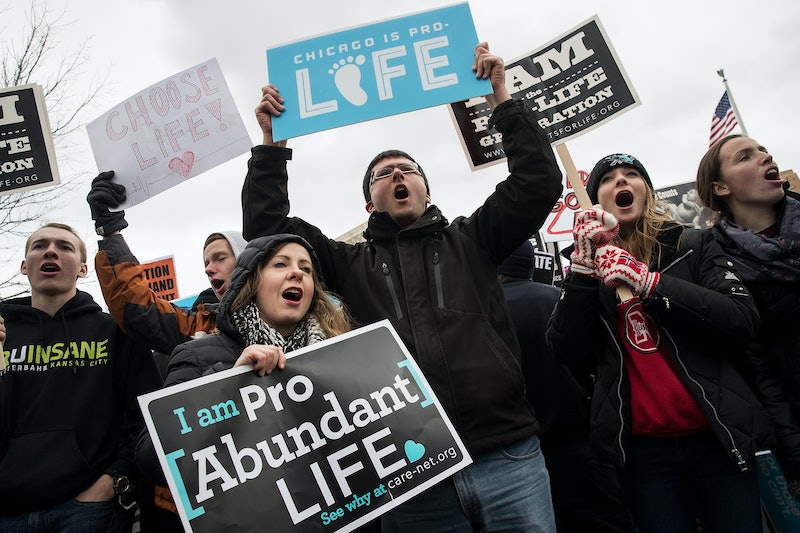 People opposed to abortion rights often like to brand themselves as "pro-life." But some of some of these people's other stances can make you question whose lives they're really "pro." A recent viral Facebook post by electrologist Valerie Jackson calls attention to this inconsistency, pointing out a glaring hypocrisy that speaks volumes.

As a trans woman whose mother had her when she was 18, Valerie Jackson has a unique perspective on the legal debate over abortion. She knows that many of the people who would've been opposed to her mom getting an abortion as a teen are also opposed to her very existence now.

"Let's say she did consider an abortion, and a social conservative convinced her how important and 'Godly' it was to keep me. All these years later, I come out as transgender. Then, that same social conservative condemns and judges me for transitioning," she explained in the Facebook post. "They say they value life so much, yet I know they see the news stories of us killing ourselves, being tortured, and murdered at record-setting rates every year! Where's the compassion, respect, and love for me now? This is why we call you out! This is why we say you're discriminating. A true-held value will always be the common thread in all your actions, not just the few you like."

Indeed, stories of people taking trans peoples' lives or trans people dying by suicide as a result of bullying and discrimination are tragically common. According to the National Transgender Discrimination Survey, over half of trans people bullied for their gender identity end up attempting suicide, and over three quarters of those subject to sexual or physical violence do.

Jackson clarifies in a private Facebook message to Bustle that she doesn't intend to generalize about all people opposed to abortion. "I know pro-lifers that are fully supportive of trans people," she says. "This post was about the large number of people who are pro-life and anti-trans." The point is this: To say you are "pro-life," but then actively oppose the lives of other people simply for being different than you means that you are not actually "pro-life." It means you're pro some lives, but not others — and to claim otherwise is to be disingenuous.

Jackson also points out that this isn't the only form of hypocrisy she's witnessed when it comes to many conservatives' views of trans people. A similar inconsistency became apparent when Republican lawmakers involved in North Carolina's HB2 and other "bathroom bills" professed concern over the safety of women in public bathrooms.

Their argument was essentially that without such legislation, men pretending to be trans women could sneak into bathrooms and sexually assault or harass women. Yet a sexual assault in a bathroom at the hands on a trans person has never been reported, while trans people themselves are harassed and assaulted disproportionately. Almost half of trans people in the United States have been victims of sexual assault, according to the latest U.S. Trans Survey.

"If they really want to protect women and children from a perverted linebacker in a wig and lipstick, then they should be protecting trans people, too," says Jackson. "The proposed requirements for access to a women's bathroom prove they are trying to make it as hard as possible even on the ones who have transitioned, even though they say they don't have a problem with actual trans people in bathrooms. It's blatantly obvious it's based on discrimination and oppression."

Because there's so much oppressive rhetoric couched in language about defending "life" or "safety," Jackson is urging Americans to think critically during this politically charged time. "It just seems like a very large number of social conservatives are simply moving from one minority group to the other. They started attacking gay rights with traditional marriage, and then it was onto trans women in bathrooms. Now it's abortion, because they're seemingly losing these social fights over and over," she warns.

In parting, I'll leave you with Jackson's powerful words:

We have to stay vigilant. Don't take the first thing you hear as truth. People should start caring more about each other, so when one is down, we're there to lift them back up. It's like an "I scratch your back, you scratch mine" type of thing. We're all in this together! Our country is like a machine that needs constant attention to remain optimally functional. ... We also need allies to stand up with us. Tell our stories, share our pictures, challenge people's views and opinions, make a two-minute call to your senator, write a short and simple postcard to your local politicians voicing your opinion. I know cisgender women that have had abortions, and I'm here now to help fight alongside for their choice and bodily autonomy. Some of them stood up for me, and I should be doing it for them.

Stay strong. And stay together.