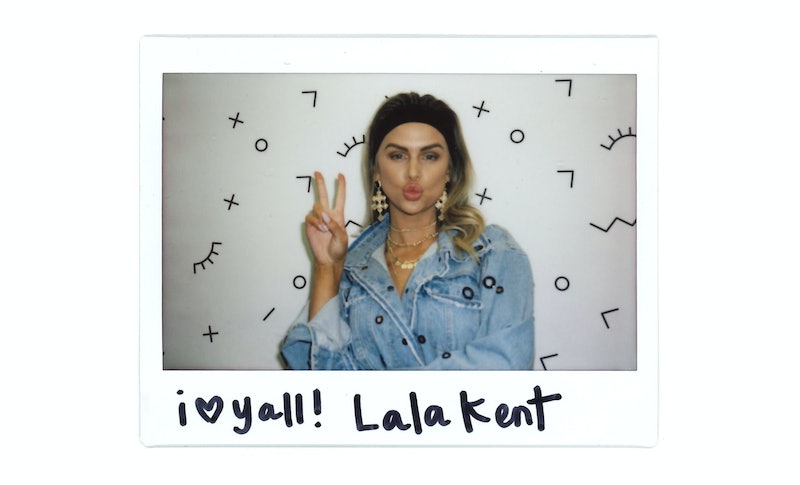 When celebrities hang out with Bustle editors, we want to give them the chance to leave their mark. Literally. So we hand them a pen, a piece of paper, a few questions, and ask them to get creative. The rest is up to them. This time, Vanderpump Rules star Lala Kent is leaving her mark in the Bustle Booth.

Stassi Schroeder recently suggested on an episode of Vanderpump Rules that Lala Kent must have a magical, sparkly vagina that makes people want to just give her things — whether it's unlimited access to a private jet or a second chance at rebuilding a broken friendship. While I can't speak to the nature of Lala's vagina, there is something mesmerizing about Lala that immediately makes me want to do whatever I can to make her comfortable as she settles onto the couch in the Bustle studio.

Luckily, all she asks is that I replace the warm, sorry looking plastic bottle of soda she's been carrying around in her purse all day with a frosty Diet Coke can from one of our fridges. "It's just better in a can, you know? I don't know what it is, it's just different," Lala says, shaking her head in wonder as she casually pops the top and takes a sip. Satisfied, she smiles at me, adjusts her hair, and leans in to start talking, ready to give me Lala.

This season of Vanderpump Rules has been an intense one for her, as she's opened up on camera about the death of her father just before filming started, her struggles with anxiety, and her changing relationship with alcohol.

"It is different for me to watch this season back, because I really was in such a fog all season long," she says. She adds that filming this season "saved her life" because it got her of the house and gave her a purpose during dark times.

Luckily, Lala says she "feels amazing" these days, in large part due to her decision to get serious about her sobriety earlier this fall, just after filming this season. Her newfound sobriety hasn't only benefitted her in her personal life, it also made filming the upcoming Vanderpump Rules reunion a whole lot easier. "Last year I was tanked," she says, which took a toll on her stamina. But this year? "I could've gone another 13 hours. I felt fabulous after the ending," she adds with that signature Lala finger point. And that's saying a lot, considering she calls it the "worst reunion" the group ever filmed. "I think [after the reunion] every single person was like, 'F*ck this, I need to go home and shower, I feel dirty.'" Except her.

For Lala, the reunion was all about coming clean. "I have washed my hands clean of James Kennedy," she declares, doing a little shimmy as if she can just feel his bad energy creeping up her back.

Though this season was a tough one for her, Lala says she's not planning on quitting the show, as she did in the middle of Season 5, even though she does have a ton of other things going on both professionally and personally. "I want to rock Vanderpump Rules until the wheels fall off," she says. "It's my homeland, it’s the mothership." Something tells me that won't be a problem, since it's definitely Lala's good energy, and not her possibly sparkly vagina, that makes her so much fun to spend time with both on and off screen.

Check out Lala's answers to the Bustle Booth below.