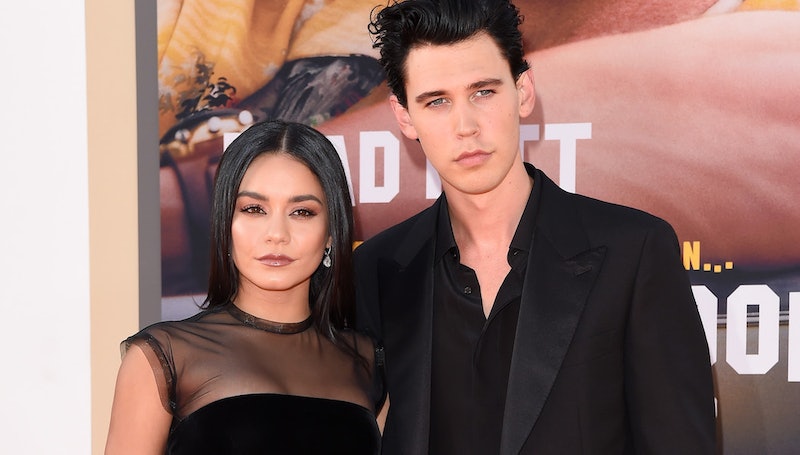 After more than eight years together, Vanessa Hudgens and Austin Butler have reportedly split. A source confirmed to Us Weekly and People on Tuesday that the two have officially called it quits, and that Hudgens has been “telling those close to her about their breakup.” Hudgens and Butler, who started dating in September 2011, first sparked speculations of a split after they appeared to spend the holidays apart.

Bustle has reached out to Hudgens' and Butler's reps for comment. Hudgens, who regularly shares photos of her longtime beau on her social platforms, shared a series of pictures on Instagram on New Year’s Eve with Butler noticeably absent. In the photos, Hudgens is donned in a black gown and white gloves that invoke her Princess Switch films. She captioned the Butler-absent post, “HAPPY NEW YEARS.”

In a separate post prior to the New Year’s Eve festivities, Hudgens celebrated her birthday on Dec. 14 and similarly shared a Butler-less clip with sister Stella Hudgens that featured the two dancing. She captioned the post, “A few gins in and a birthday later.” Similarly, Hudgens has not appeared on Butler’s social media. Around this time last year, Hudgens documented her NYE festivities with photos alongside Butler and her sister on Instagram.

While Hudgens and Butler were first linked in 2011, the Daily Mail reported that the two first met on the set of Hudgens’ 2006 film High School Musical. Butler did not star in any of the original High School Musical films, but the two still share a connection to the Disney franchise: Butler starred opposite Hudgens’ co-star and friend Ashley Tisdale in the spin-off film Sharpay’s Fabulous Adventure. Since then, Hudgens and Butler have regularly documented their relationship on Instagram with birthday homages and Coachella trips.

Hudgens last documented Butler on her Instagram on Halloween 2019. She captioned a black-and-white photo of the two in costumes (alongside her dog), “happy Halloween from my family to yours.” Butler, on the other hand, last shared an Instagram photo with Hudgens last July as the two attended the premiere of his film, Once Upon a Time in Hollywood.

In an interview with Women’s Health in 2018, Hudgens opened up about her relationship with Butler and revealed that she wasn’t in too much of a hurry to wed. “I want to get married, travel, then have kids — probably in my late 30s,” Hudgens said. “Everyone’s clock is different.”

She added of Butler, “We both respect, trust, and admire each other. It’s so solid now because I feel strong as an independent woman. I am very self-reliant, but it’s nice to have a best friend you can share victories with as well as losses.”

Hudgens and Butler have not addressed the split on social media.

More like this
‘The Bachelorette’s Michelle Young & Nayte Olukoya Explained Their Breakup
By Stephanie Topacio Long
Annie Lord’s Memoir Will Make You Believe In Love Again
By Shahed Ezaydi
Who Is 'Umbrella Academy' Star Elliot Page Dating After His Divorce?
By Jake Viswanath
Tanya Burr Is Expecting A Baby With Her Mystery Partner
By Maxine Harrison
Get Even More From Bustle — Sign Up For The Newsletter