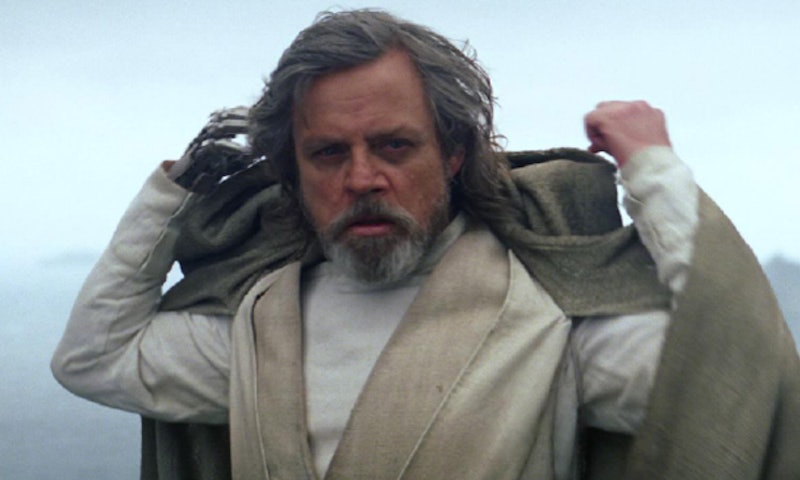 Though the film's release is still months away, the new Star Wars: The Last Jedi photos are here to give fans a little more insight. They were shot by Annie Liebovitz for Vanity Fair and released on Wednesday as a little hump day treat for all those of us who are craving info. The article doesn't contain specific written information about the plot, but that shouldn't stop enterprising fans. We've already squeezed every last bit of meaning out of The Last Jedi's title, so new photos are an embarrassment of riches. And, even better, nearly every character is covered, so this is quite the sneak peek.

The magazine's covers are intriguing, too. There seem to be four total, and each features either one, two, or three characters. The groupings appear to be based on whom each character spends the most time with in the film, so they're giving us information before we even dive in. Carrie Fisher as General Leia is the only character to be featured alone. It feels like a nod to her prominence in the franchise, as well as her untimely and unexpected death in 2016. But it's also a reassurance that Fisher's last Star Wars appearance will be a crucial one, given all the importance it deserves.

Inside the magazine, Fisher is also shown posing with Mark Hamill as Luke Skywalker, which Twitter user @kenobarnes noticed was a throwback to one of their first images together.

But this, and the fact that Fisher is also shown with her daughter, Billie Lourd, who plays Lieutenant Connix, suggests to me that we'll see a softer side of Leia in this installment.

Daisy Ridley as Rey and Hamill as Luke Skywalker are pictured together on one of the covers, lending credence to the theory that Skywalker is the last Jedi referenced in the title. It also fuels suspicions that the plot will center around Skywalker teaching Rey his skillset, and — fingers crossed! — that we'll see her become a Jedi as well.

She has a light saber in one of these pictures, so I'm feeling pretty optimistic.

But circling back to the covers: then, there are two groups of three. The first is First Order leaders: Adam Driver's Kylo Ren, flanked by Gwendoline Christie as Captain Phasma and Domhnall Gleeson as General Hux.

And then there's the second group of three, the rebels: Oscar Isaac, John Boyega, and Kelly Marie Tran as Poe Dameron, Finn, and Rose Tico respectively. We already knew these groups would be hanging around each other, but these photos drive home just how equally matched the two sides are. We're building up to an epic showdown not just in The Last Jedi, but in the final film of the franchise, due out in 2018.

Let's not get too ahead of ourselves, though. The photo spread also introduced two of the new characters, played by Laura Dern and Benicio Del Toro.

Del Toro is described in the Vanity Fair piece as a "shady figure" with no set allegiances, so it makes sense that he's pictured alone. And with the way he's gazing into the camera, I'd imagine he'll one of the wild card characters, competed over for support by the opposing sides. He's not given a name, even in the film, but the filmmakers call him "DJ" and say that we'll understand why when we see it.

Dern's character Vice Admiral Holdo and Tran's Rose are much less fluid in their allegiances. Both are in the Resistance: Rose is a maintenance worker, but, as her title suggests, Holdo is a high-up officer. She has a steady, calming presence in her photo, which I imagine would carry through in her character. She strikes me as someone who earned her high rank through cautious, reasoned decisions, and I'd predict she'll be a voice of reason in The Last Jedi.

The unlikely hero that is Rose is another story. We don't know much about her character's personality yet, as she's new for this movie, but it sounds like the maintenance worker is particularly daring. Vanity Fair reports that her part is the largest of any of the new characters, and that it involves a dangerous trip into enemy territory. With none other than Finn himself.

And finally, there's an image of Rey in the cockpit of an aircraft, seated beside Chewbacca. It's a place that would rightfully be reserved for Han Solo, but, after his death in The Force Awakens, it looks like Rey is stepping up in more ways than one. Not only is she training under Luke to become a Jedi, but she's filling in for Han as well. It's even clearer proof that she'll be the star of this next film and deservedly so.

In short, there's clearly a lot to look forward to in the The Last Jedi. This movie is going to be stuffed to the gills with familiar faces, new plot lines, and clever twists, and December 2017 can't come soon enough.